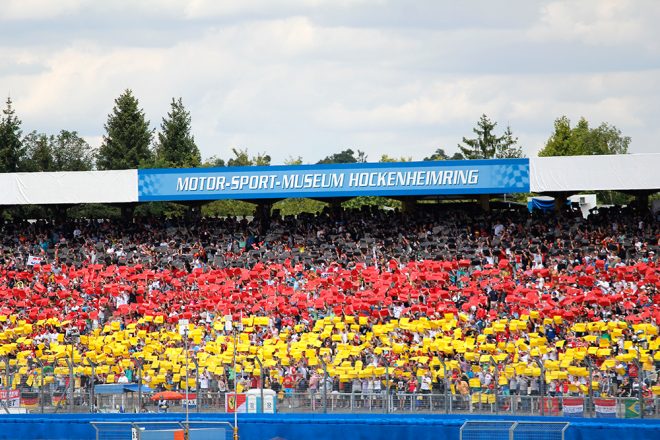 Since 2013, W and I have been to a different Formula 1 Grand Prix every year. First it was Abu Dhabi, then Hungary, Monza, and Austria. We always try to pick a different race out of the annual calendar and make all the necessary arrangements to once again experience the thrill of the fast cars. When it comes to an end of a GP, we are already planning which one to go the following year. Yes, we are big fans of the sport, so much that we plan on one day follow the calendar and go to all races in the same year. Wouldn’t that be cool?

This year we decided it was about time to tick the German GP off of our Formula 1 bucket list, and I happily say before hand that Hockenheimring is one of the best circuits I have been so far. Unfortunately, the German GP doesn’t happen every year on the same circuit, sometimes it happens in Nürburgring, and last year for example, didn’t even happen at all, which made this a very special year for the German fans. The great news is that the 2018 GP is already confirmed in Hockenheimring once again, and we are looking forward to it!

The Formula 1 Grand Prix in Hockenheim 2016 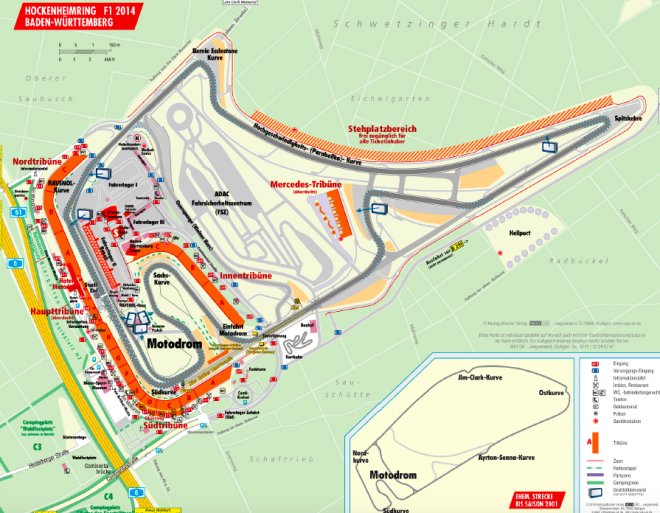 Hockenheimring was built in 1932, but the first Formula 1 Grand Prix only happened in 1970. From 1999 to 2003 the circuit went through a major rebuilding work that cost around 62 million euros, which improved the tracks by making it shorter and with more possibilities of overtaking, as well as increased its capacity from 83,000 spectators to 120,000.

The South, Main and North stands

We chose to stay on the South Stand B of the circuit, which was an amazing choice, especially if you consider the price and that we bought our tickets a little bit too late. From the stand you can see the start, the entrance to the boxes, 3 different turns, and a big screen. This area is one of the favorites and also beloved by the drivers, as they claim that sometimes people are cheering so loud they can hear them from the car: 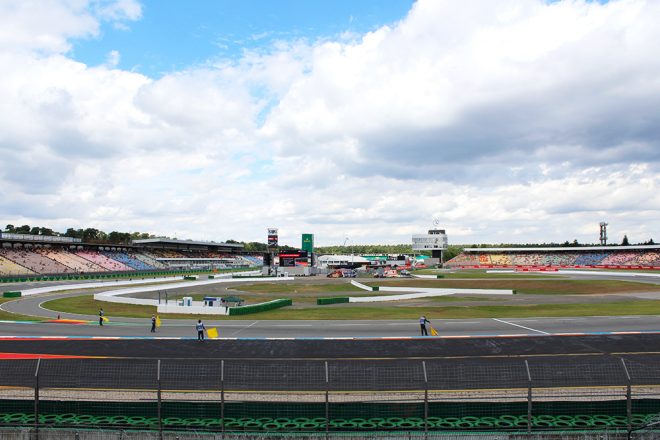 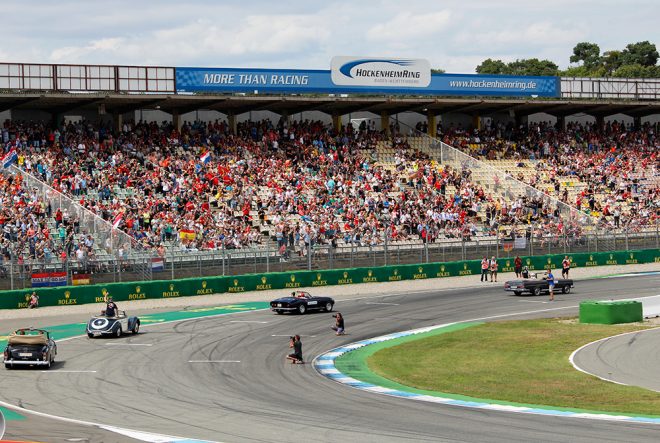 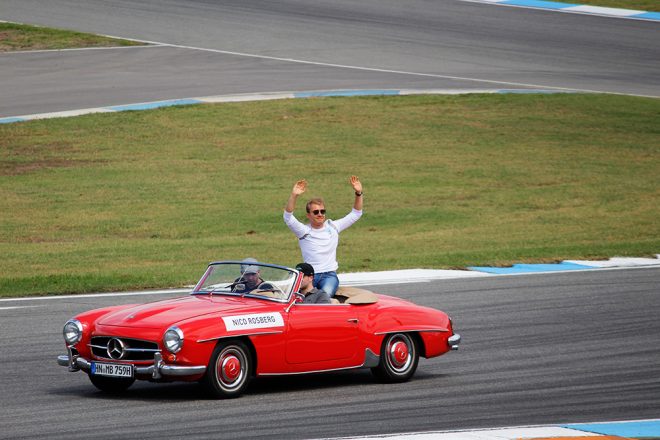 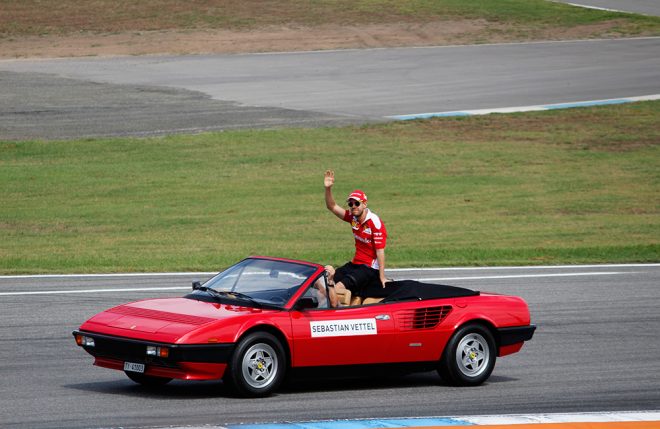 Since on Friday stand tickets’ holders are allowed to sit wherever they want among the stands, we had the chance to check out another area of the South Stand, as well as the Main and North stands, which were also fantastic.

From the South Stand E you can see the start, two turns and have a great view of the cars coming into your direction. Probably one of the best places to sit and for photography: 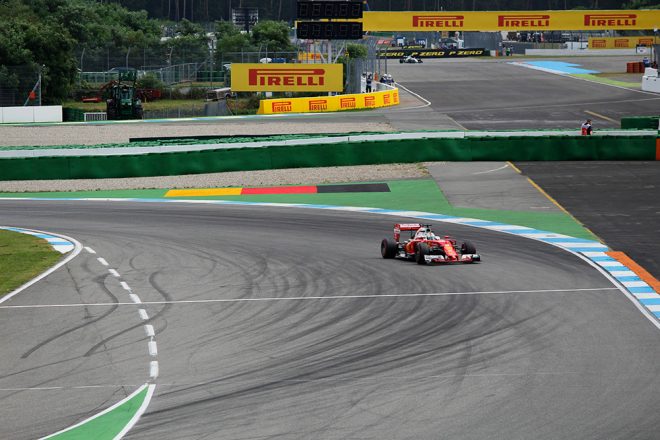 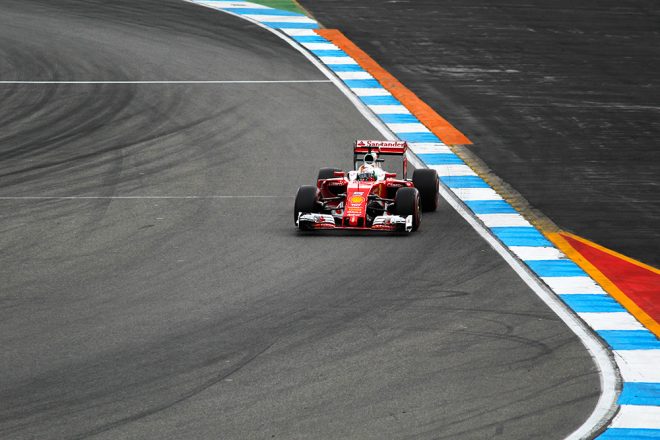 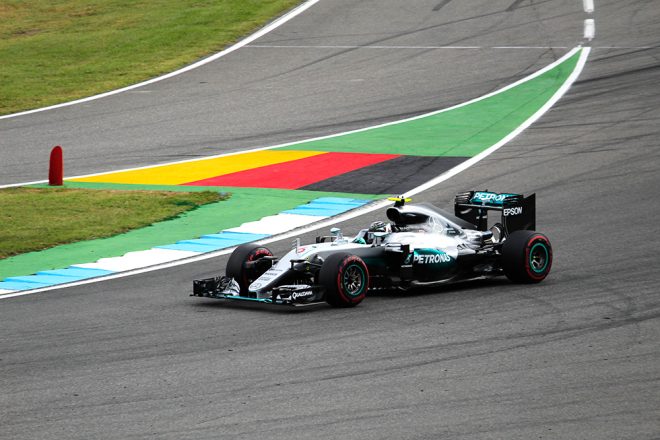 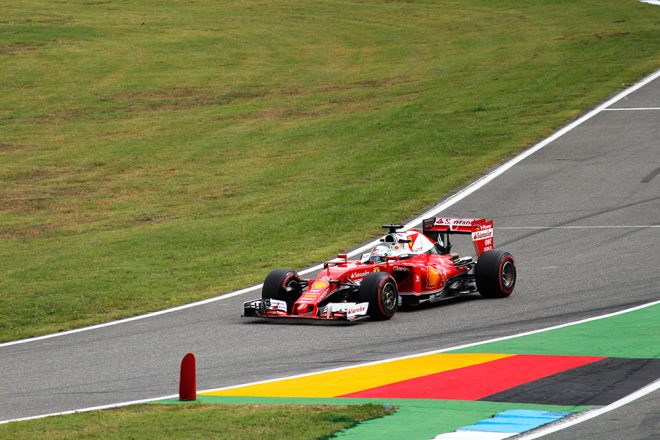 From the Main you can see the start very well, as well as the podium and the boxes: 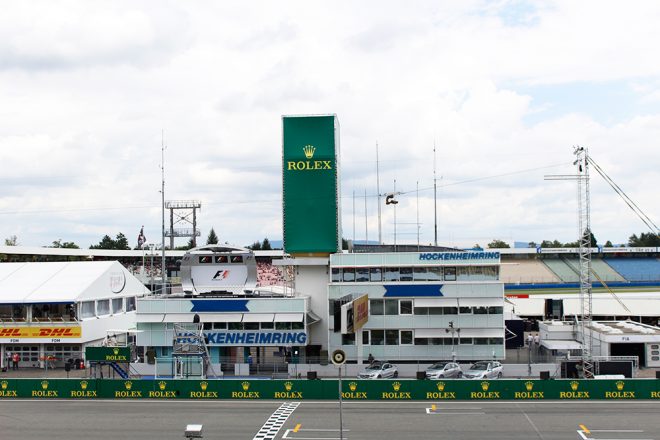 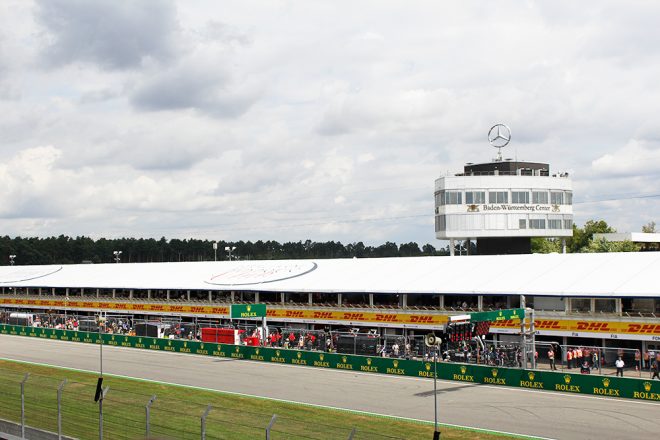 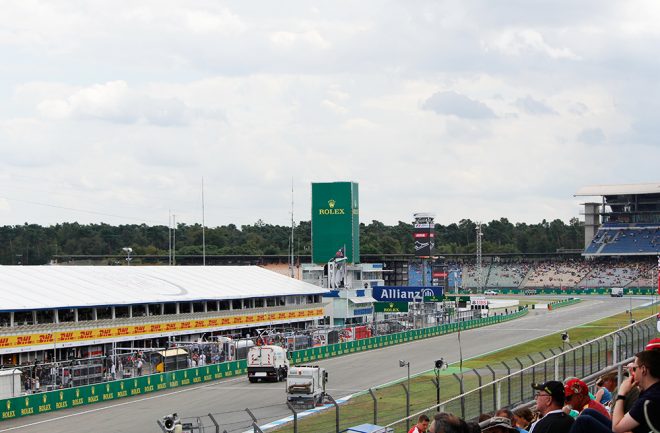 From the North Stand B, you can see the start, the exist from the boxes, which is one of the coolest parts, and the first turn after the start. Definitely a place to consider staying next time: 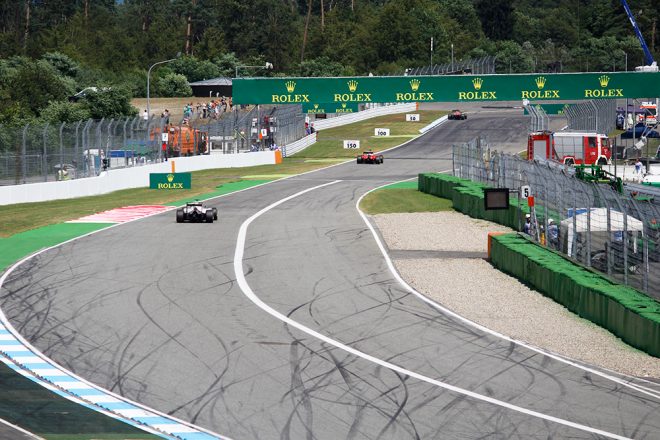 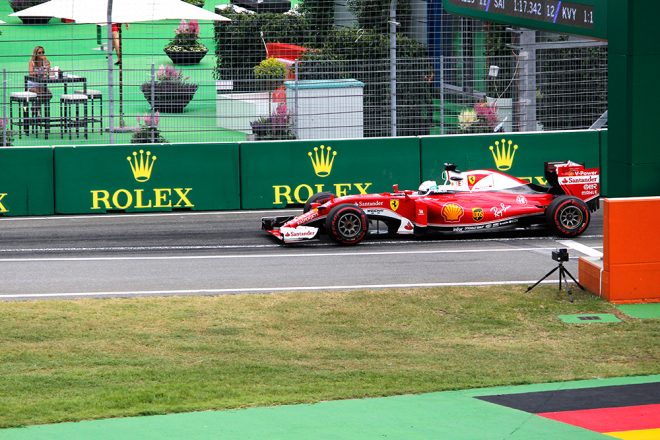 Each grandstand has their entrance, where your ticket and bags/backpacks are controlled, bathroom and a small food stand.

I can just start by saying that this circuit is the most organized I have been so far. I don’t know how it used to be in the past, but if it wasn’t as good as today, they definitely learned with their mistakes and improved. Below are my experience with parking, cleanliness, bathrooms and food and drink:

For starters, parking in Hockenheimring is free. Of course, there are some special paid parking, which can be booked in advance and are normally very near the circuit. The common parking is very organized, and there are different options around the circuit, giving you the chance to park as near as you can from your seat.

If you find trash on the floor it definitely wasn’t because there weren’t enough garbage bins, because they are everywhere. The circuit was very clean in general. 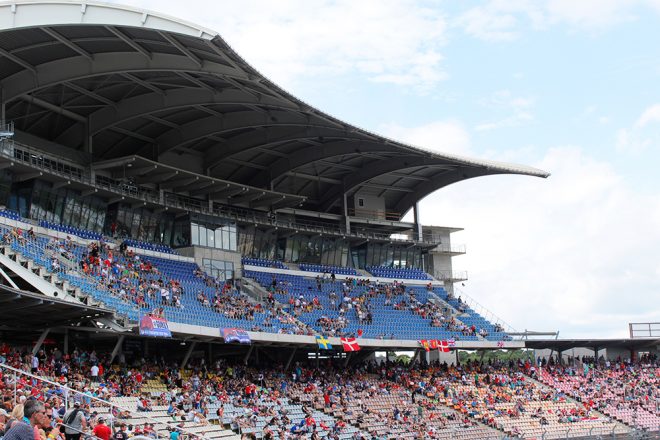 Each grandstand has their own bathroom, and during all the time I spent on the circuit from Friday to Sunday, they were always clean, there was always soap, toilet paper and paper towels to dry the hands. Apart from them, there were also portable bathrooms spread around the circuit, but since I haven’t used these, I can’t tell how clean and good they were.

Out of the 6 different circuits I have been so far, the best one for food and drink was Hockenheimring. Normally the options are very limited on the circuits, but I was impressed by how many options there were. Behind the grandstands there was a small food court where you could find from burgers to Italian food, kebab to potatoes, doughnuts to crepes, and there was also a biergarten where you could also find Asian food and even a Brazilian stand with drinks. Not to mention that the price was totally fair. 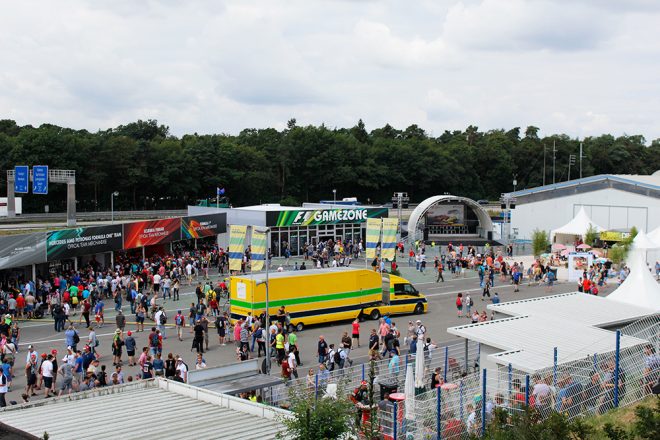 It seems to me that each year the F1 FanZone gets better. For those who don’t know, every Formula 1 race has a FanZone, where you can buy merchandise, play and even have the chance to get the drivers’ autograph. This year there were F1 car simulators, both static and motion, as well as a Mercedes simulator. In Hockenheimring, in the area near the stage there was an artificial beach and even a hairdresser!

On the Saturday after the qualifying there was an autograph session with some of the drivers. It was bit too disorganized for my taste, the drivers arrived late, and some of them didn’t stay longer than 15 minutes, but even so I managed to get Nico Rosberg’s autograph on my Ayrton Senna’s cap (my lucky yellow cap). These autographs sessions are normally PACKED, so if you really want an autograph, you need to get there early and try to stay in the front, otherwise, forget it. Here are some pics of the autograph session: 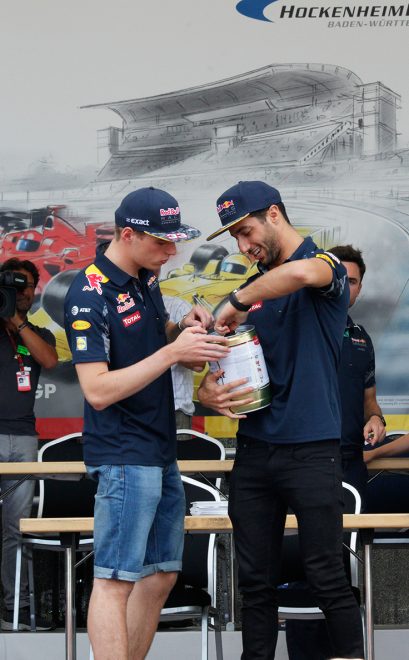 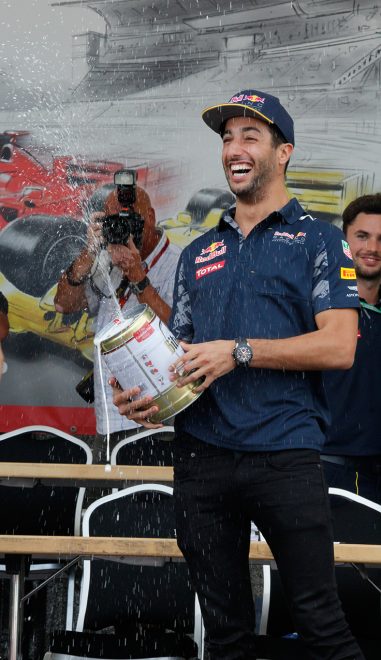 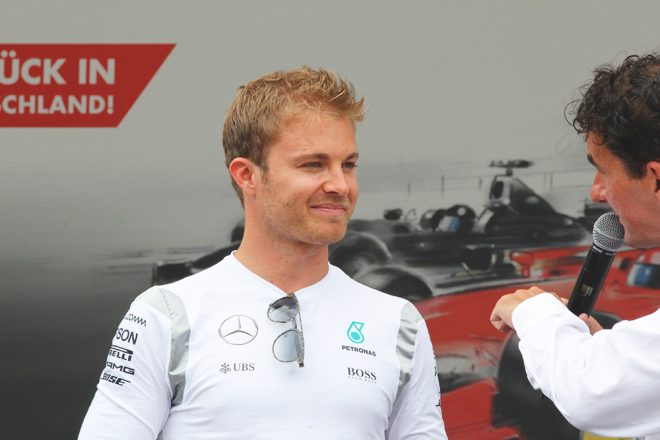 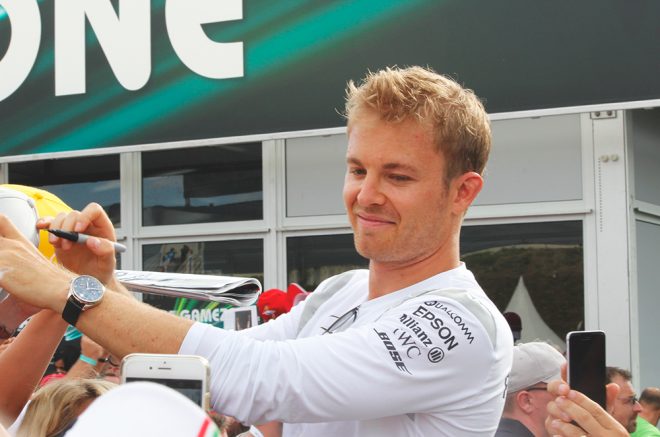 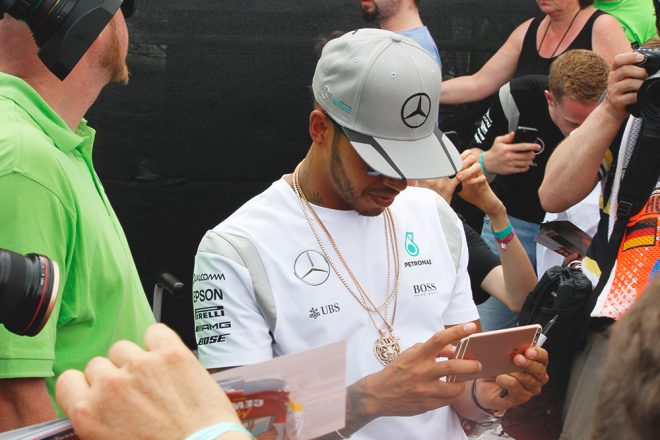 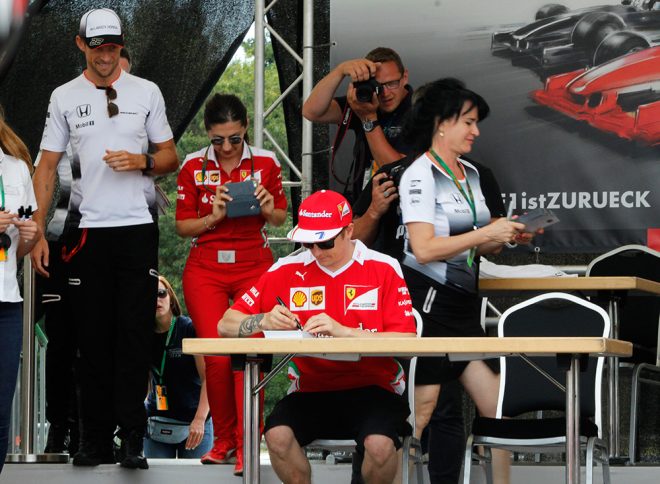 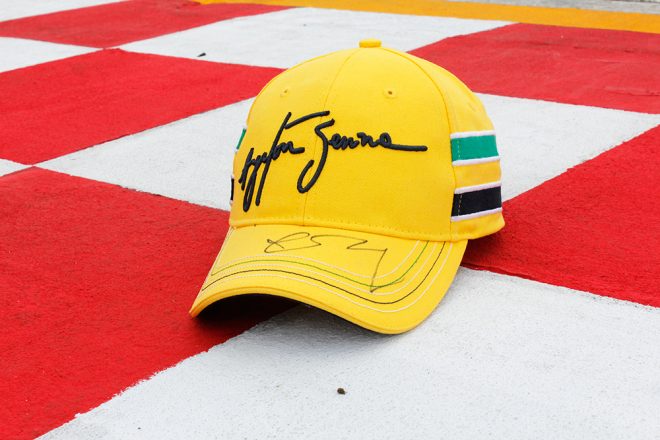 Where in the world

Hockenheimring is located in the small town of Hockenheim, in the province of Baden-Wüttenberg, the nearest big town is Heidelberg, around 20km away. It is 340km away from Munich and 96km from Frankfurt. 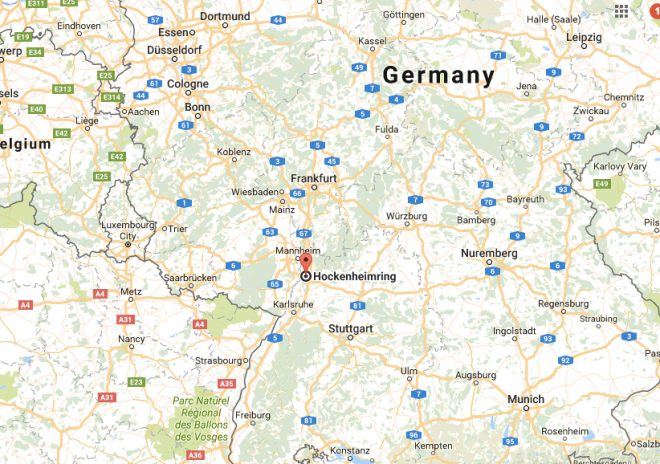 The best way to get to Hockenheim is by car or with an organized shuttle, the city is in the middle of nowhere and it’s not so easy to get there by train or bus.

Near the circuit there are a few options, varying from rental apartments to hotels and guesthouses. Of course, they are more expensive and harder to get a free vacancy, especially if you don’t plan in advance. We stayed 40km away from the track, at the Hotel Hirsch in Sinsheim-Hilsbach, a very pretty village. We were very happy with the hotel and would definitely stay there again. 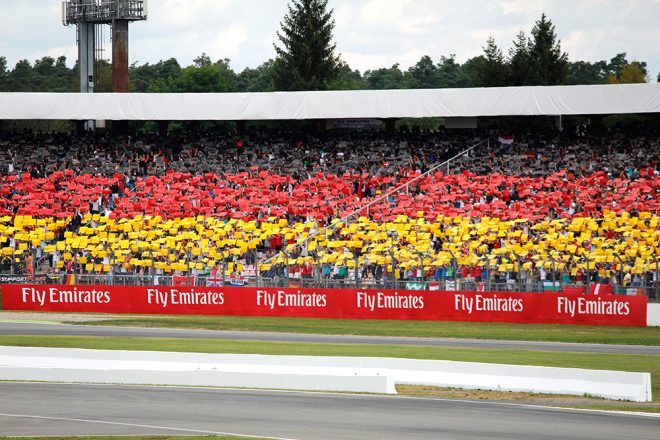 Tips for the circuit

– Download the Hockenheimring app to get all the practical information you need for the circuit.
– The circuit has its own radio (92,4), which is pretty cool for when you are stuck in traffic.
– Always arrive early to avoid traffic, aim to be there at 9am every day.
– See what to pack for a Formula 1 Grand Prix.
– Get the tickets here. 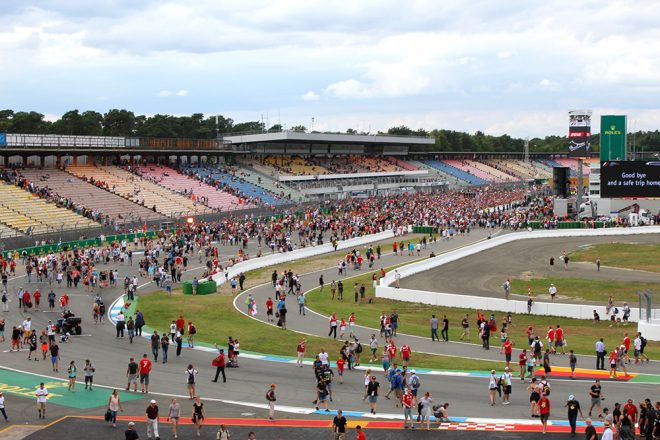 And the winners were: 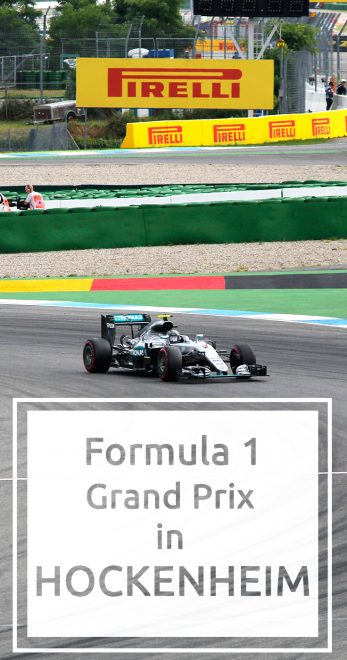