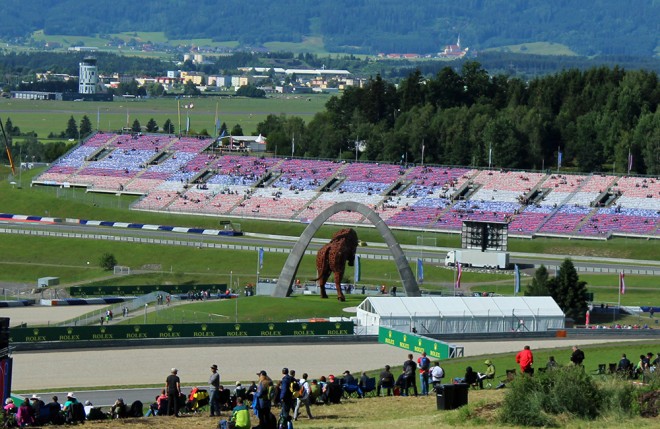 For a Formula 1 fan, every track is different, every race is special, and every Grand Prix is unique. Every time I go, I feel the thrill, the excitement of seeing those cars racing before my eyes, the sound of the engines, and the thought that it is one normal human being driving that machine at over 300km/h.

The Formula 1 Grand Prix in Austria 2015 was my number 5th of many more that will still come. I went with three German guys, one of them being my husband W, but it seemed to me that I was the most excited one, and by the end of the day I was certainly not disappointed.

The Austrian GP used to be part of the Formula 1 calendar in the 1970s and 1980s, back then the circuit’s name was Österreichring (Austria’s ring) built in 1969. After the last race in 1986, the circuit came back as A1 ring for more 7 years, and in 2004 it fell off the calendar again. 10 years later, the new circuit’s owner, Red Bull, revived the Grand Prix.

2015 was the second year of the GP in the new circuit now called Red Bull Ring, located in the Austrian small town of Spielberg, 360Km from Munich and 197Km from Vienna.

I tried to get tickets for last year’s GP without success, it sold out in less than 3 days, so I made sure to get this year’s ticket well in advance. I chose to stay at the general admission, and watched the race from where it’s marked below on the map: 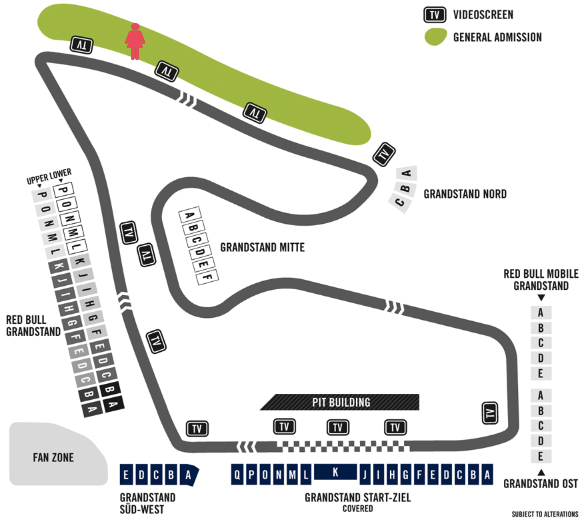 What I thought about the circuit

Spielberg was one the most organised circuit I have been so far. Parking was easy, and it was very clean (different than Monza) as there were trashcans everywhere, and some people cleaning every now and then. The only problem that bothered a bit was finding where to stay. 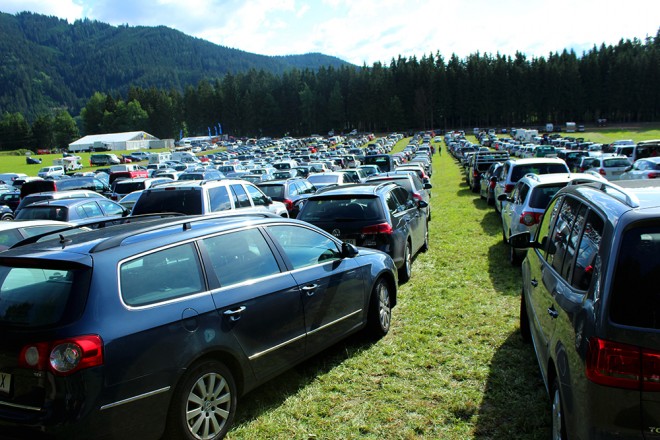 It’s free! Until now it was the only circuit I have been to that doesn’t charge for parking, which by the way is not far from the track if you compare to other circuits. Plus, it is organised by the circuit’s staff.

Arriving early is always a great idea, less traffic and more options to park. As for leaving, no need to hurry, it’s better to wait most people leave, so there will be less craziness in the parking lot and less traffic on the roads. 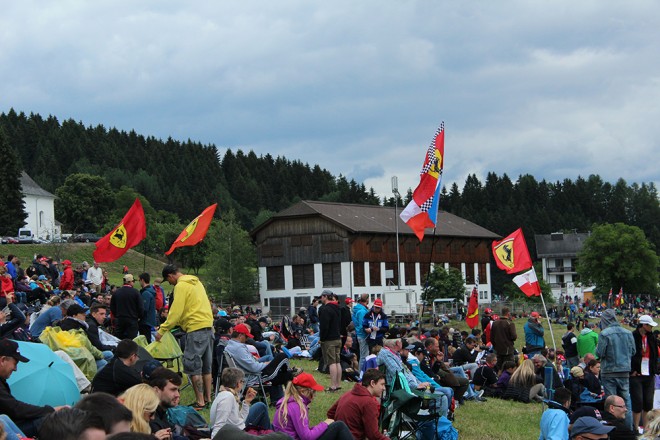 The toilets were clean and more than ok, I was actually impressed.

As for the food, of course it was a bit expensive (a hot dog cost €4,50 and a Red Bull €3,50) but that’s normal for a Formula 1 GP. The options were a bit limited but I thought that it was enough anyway; don’t expect anything more fancy than sausages and bread unless you are on the Paddock Club VIP area. 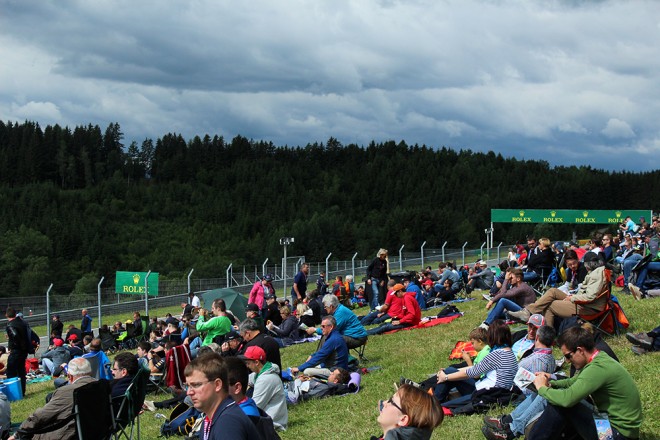 I have to say that I am not a huge fan of staying at the general admission, mainly because depending on the place I can’t see a thing, as I’m short! But I have to admit that the view from this area in Spielberg was impressive. From where I was I could see more than half of the track, as this part of the circuit is located in a hill. The down side was that the Fan Zone was very far from this area.

If you are staying in the general admission my advice is simple: arrive early. The best view to the circuit is the first row of this place highlighted below on the map: 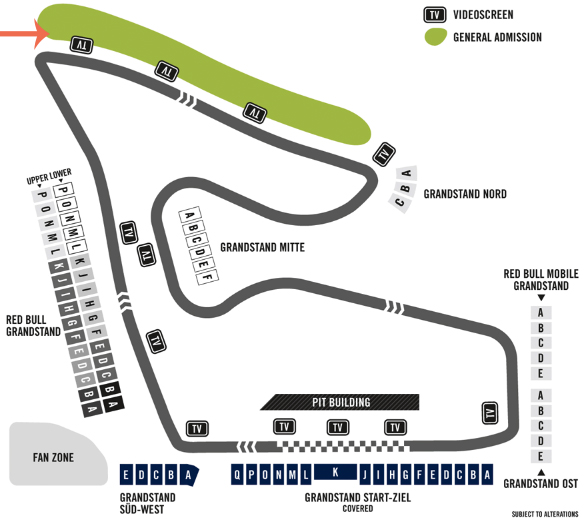 If you are not staying in the general admission, I highly recommend the Red Bull Grandstand: 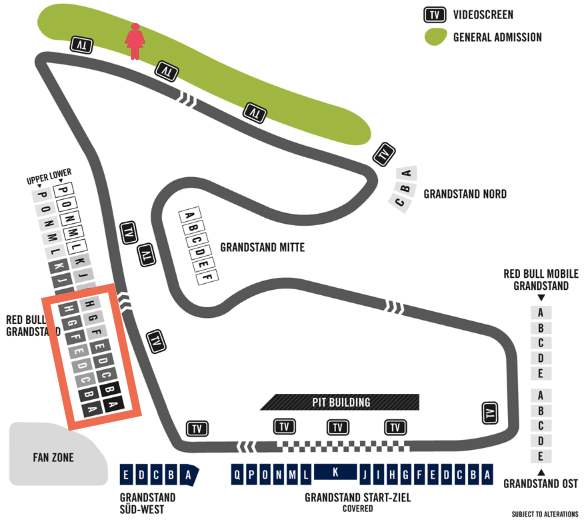 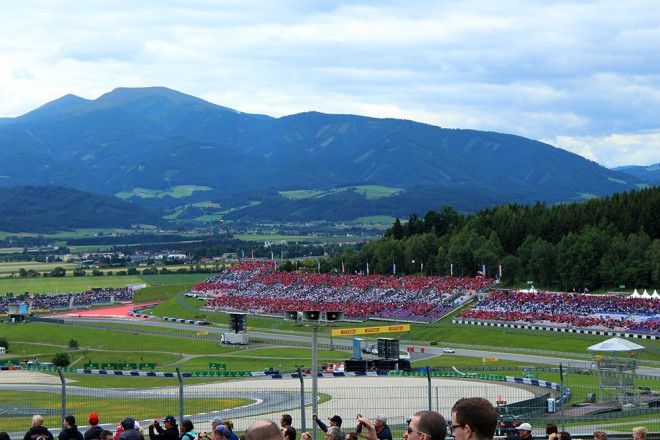 The Red Bull Grand Stand seen from the general admission

I spent months trying to figure out where was the best place to stay near the track spending less than €200 per day. Since the track is around 4 hours away from Munich – not that far – it is still hard to go and come back every day (FRI-SUN). What it is most recommended is to stay in Graz, 74 Km from the track, from where there is a daily train provided to the F1 fans.

It is also possible to go camping near the track, it costs around €250 for 3 nights and for 3/4 people. I have seen great spots while I was there, and it was actually my favourite option. However, for personal reasons I was only able to go on Sunday for the race, so I went and came back from Munich on the same day (very tiring in case you are wondering).

Nearby hotels and guesthouses are very limited and expensive, so it is really up to how much you want to spend (even so, book early). But I would recommend either camping or staying in Graz. 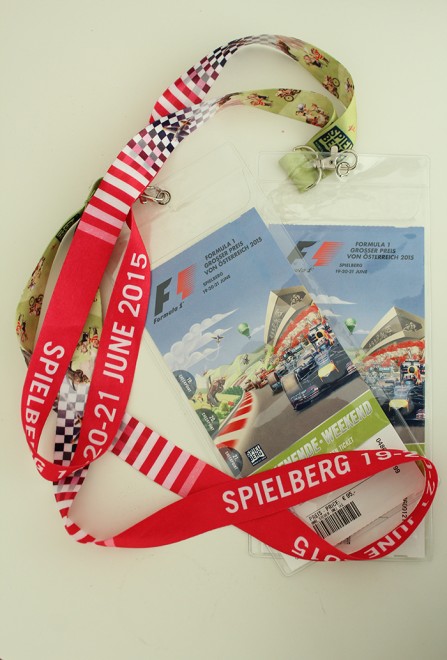 I found very nice that when buying your general admission ticket you receive a lanyard, which normally you need to pay for.

The ticket prices for the Austrian GP are great, probably one of the cheapest in the F1, together with the Spanish and Hungarian GPs.

It is very common to rain during the Austrian GP, lucky me only a few drops fell on Sunday! Check the weather and bring an umbrella!

Previous to the race start, there was an air show organized by the circuit, which was amazing and jaw dropping. There was also an helicopter carrying the largest Austrian flag in the World. 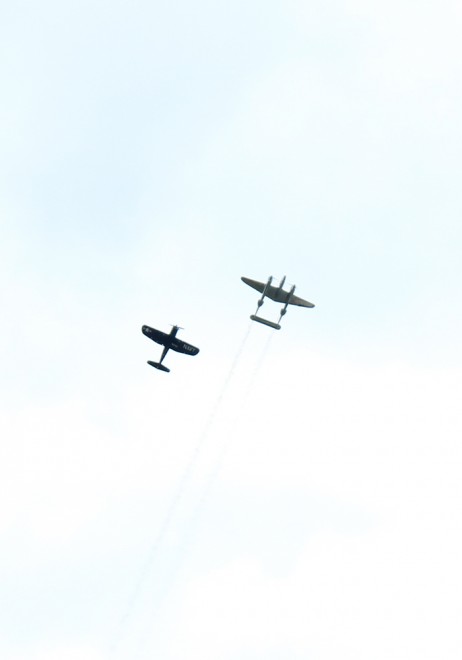 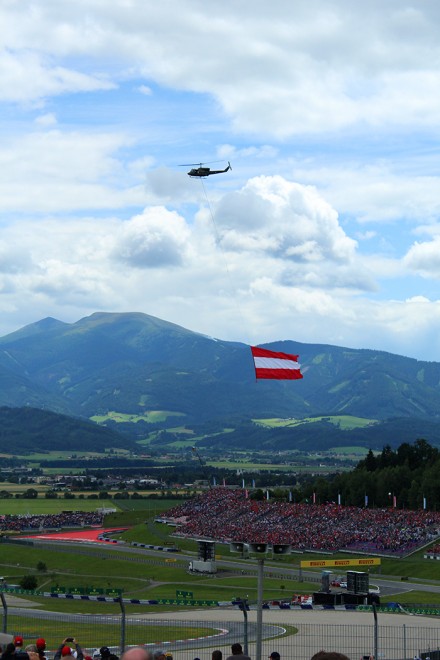 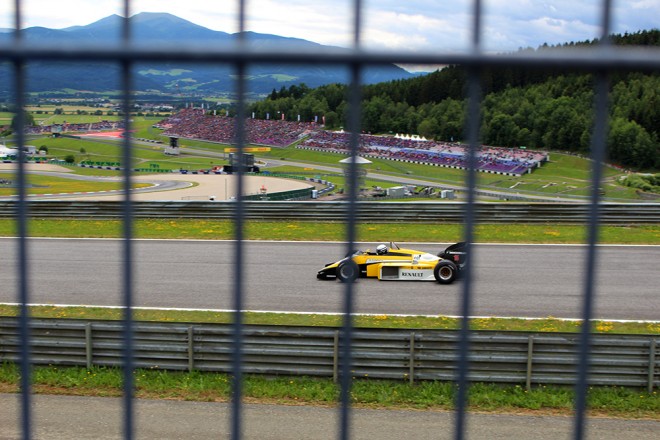 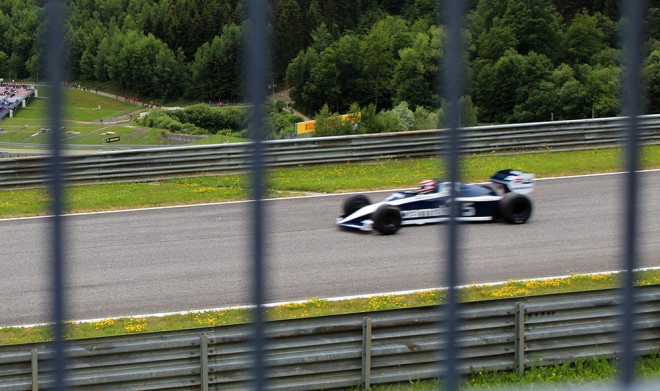 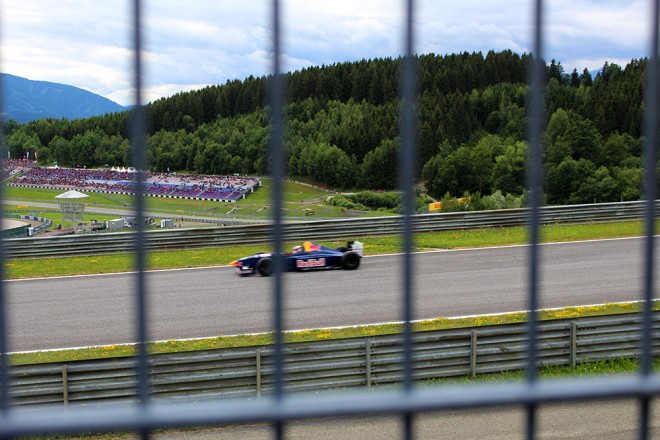 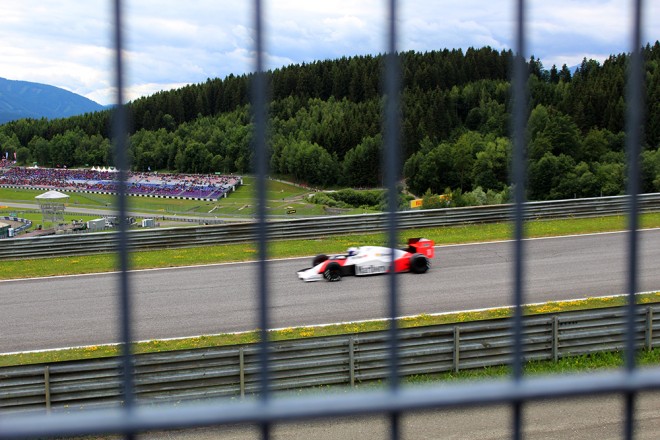 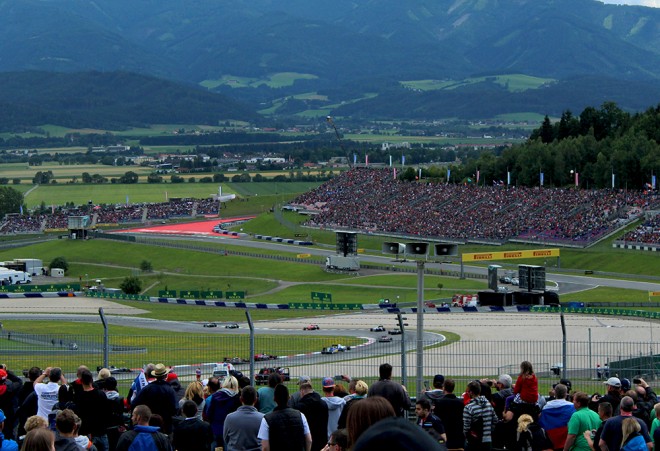 Right in the beginning of the race Fernando Alonso (McLaren) and Kimi Raikkonen (Ferrari) crashed in front of where I was watching the race. 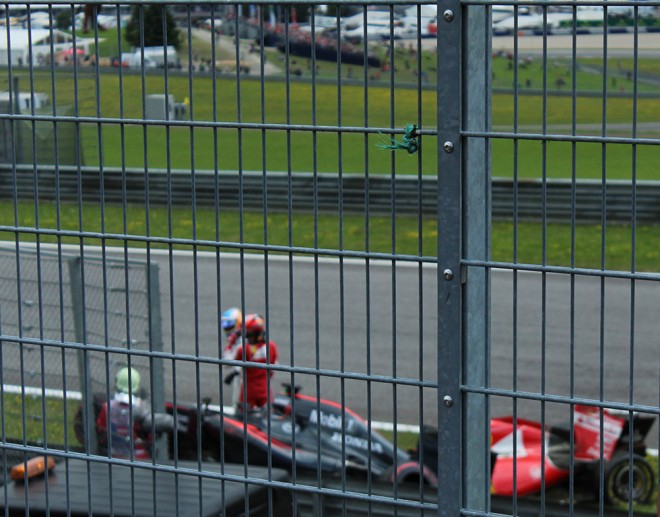 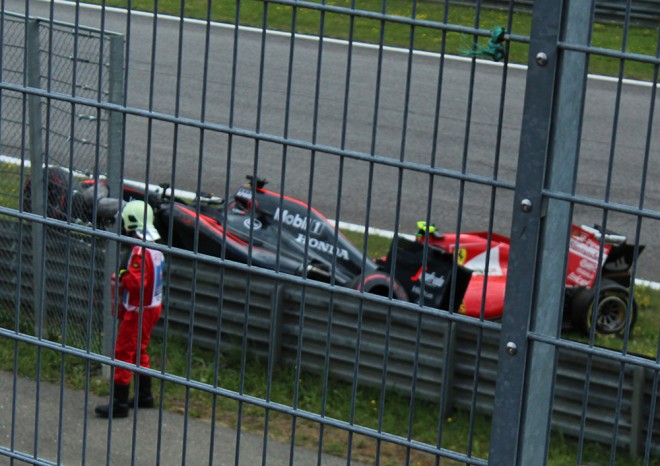 I was particularly happy about the 1rst and 3rd place. What a race!

Have you ever been to the Austrian GP?

If you have any questions or need any tips, let me know in the comments below, I will be happy to help.