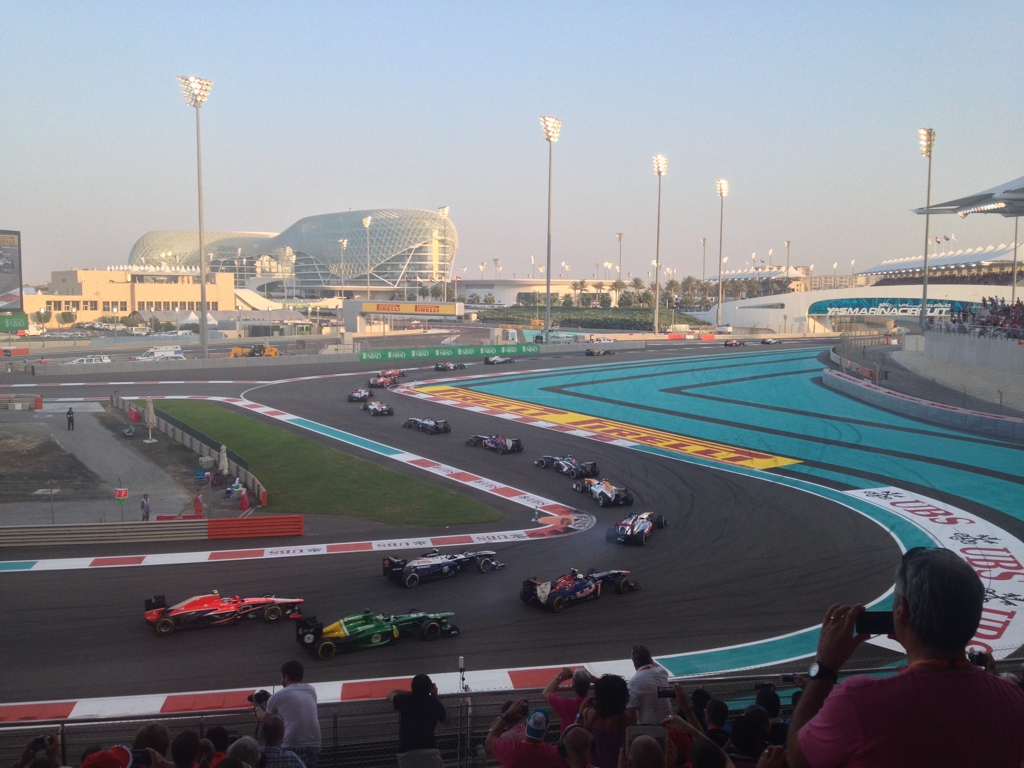 When planning my honeymoon to the Maldives, I discovered that the best way of getting there from Germany was flying via the United Arab Emirates. That being said, crazy about Formula 1 as I am, I arranged the entire trip according to the date of the Abu Dhabi Grand Prix – November 2013. Yup, I said it! And so far, it is the best one I have ever been to.

The stunning Yas Marina Circuit is part of the Formula 1 calendar since 2009, after 2 years under construction. As any other infrastructure site in the UAE, the circuit is huge, technological-advanced and innovative, providing a spectacle for both drivers and spectators, on and off the tracks. Sponsored by the local airline Etihad Airways, the Grand Prix is located a little bit outside Abu Dhabi and has its own special accommodation, nothing less than the Viceroy Hotel – or Yas Viceroy Abu Dhabi as it is officially called – right in the middle of the circuit. 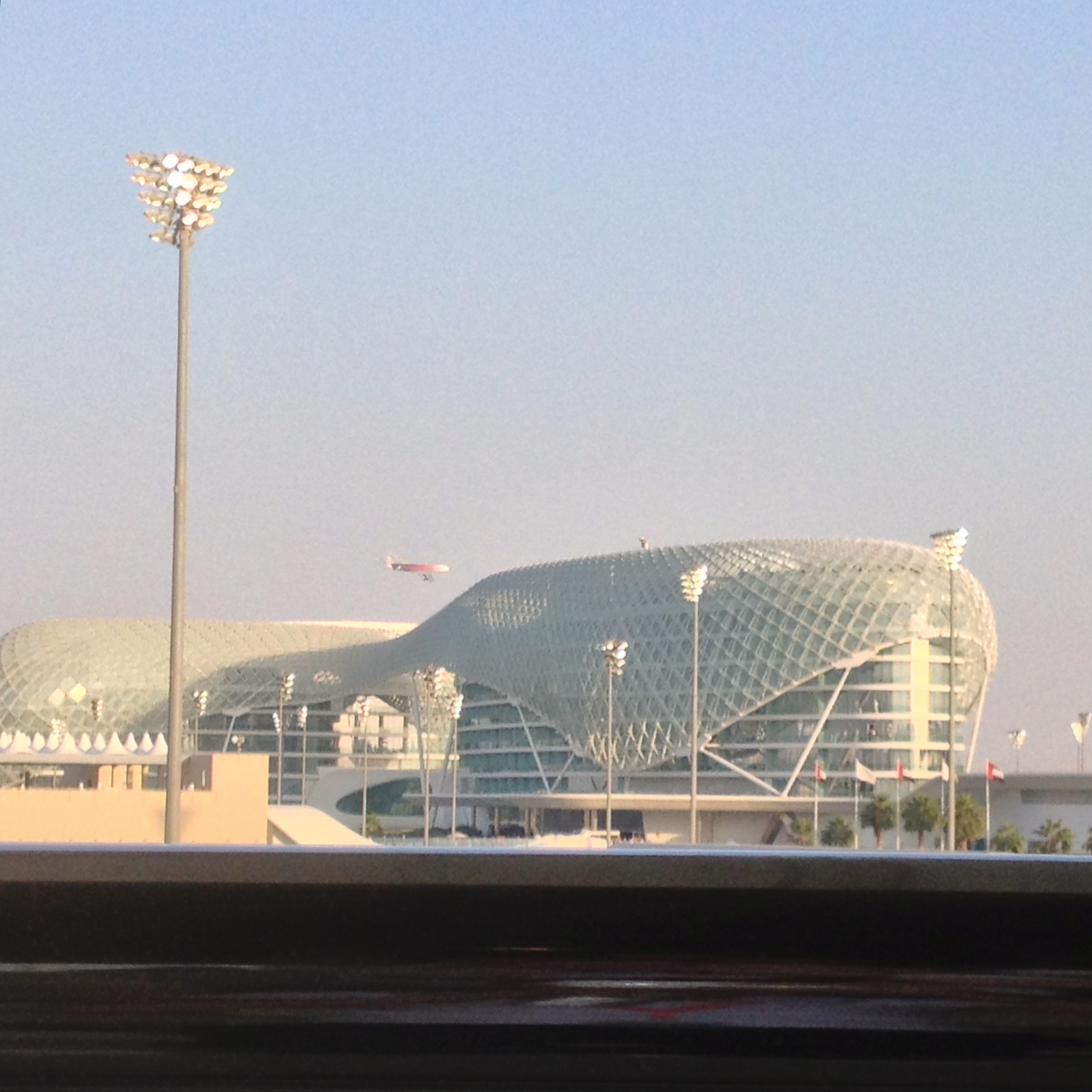 When I arrived at the circuit for the Saturday qualifying I wasn’t only perplexed with the magnificence of the place, but was also surprised with my sitting place, which was only supposed to be a normal numbered chair. More than that, W and I had access to a VIP area – the lounge – where during the breaks we could cool down with the air conditioning, buy snacks in the bistro, and eat sitting in lounge sofas in front of TV’s informing us when the next section would start. What could I ask more?

My sitting place was at the West Grand Stand, from where I could see the start – well, mostly hear it – from afar, facing the gorgeous Viceroy Hotel and right in front of 2 big screens and at the most popular turn for crashes and drivers’ mistakes. I have nothing to complain about the place I chose, and if I have the chance to go to this Grand Prix again, I would choose the same spot again!

Apart from seeing Ferraris everywhere parked around the circuit, the entire weekend was a big celebration, from the beginning – with an air show made by Etihad Airways and its A380 – to the end – a show with fireworks. In addition, each end of the day, there was a concert with some famous bands, which my ticket allowed me to go for free. I must say: splendid, something to be on every Formula 1 fan’s bucketlist!

Ferraris parked on the circuit

There are a few hotels nearby the circuit, from where you can walk or take a shuttle, though the options are limited and expensive on the race’s weekend; book in advance.

Staying in Abu Dhabi is a good option – I chose this one – though you need to know that the circuit is not so close to the city.

Staying in Dubai is another option if you don’t mind driving 2 hours to go and 2 more hours to return on the same day; it is a great choice if you are going only for the Sunday race for example.

Mostly by Taxi or car (it is very easy to rent a car in the UAE, and it’s also for a good price)

There is a lot of traffic when arriving at the circuit, I mean A LOT, so you don’t want to be stuck there for 1 or 2 hours trying to park as close as you can to the main gate or waiting in the taxi, just walk the remaining meters.

In case you decide to rent a car and don’t have those especial tickets that allow you to park inside the circuit, then I advise you to park by the Ferrari World, just nearby. You can leave the car there parked for free, then either walk or take a shuttle from the parking lot to the main gate of the circuit, where you can catch the circuit’s official shuttle that will take you to your gate. 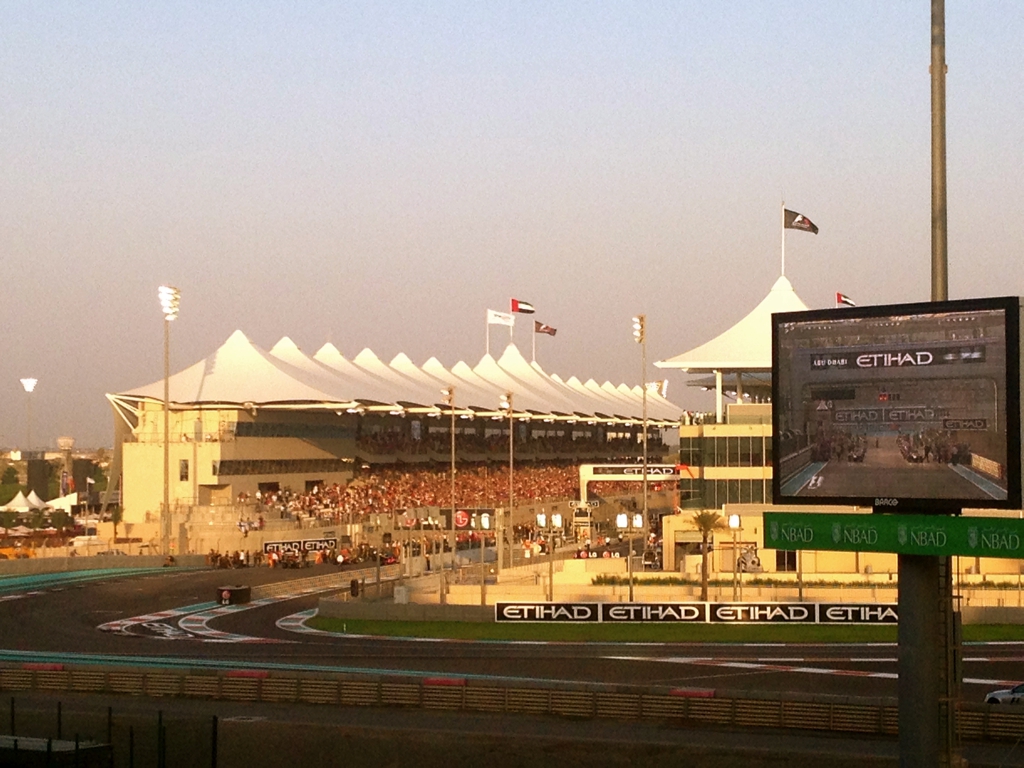 I got the tickets for Saturday and Sunday, and when I received the program I saw that on Thursday and Friday there was the possibility to get autographs from the drivers. Each driver had a fixed time and day to be there and sign for the fans. Unfortunately I didn’t know this before planning my trip, so I only arrived in Abu Dhabi on Saturday for the qualifying. So, add a few days before the race if you are dreaming of getting an autograph from your favorite driver. 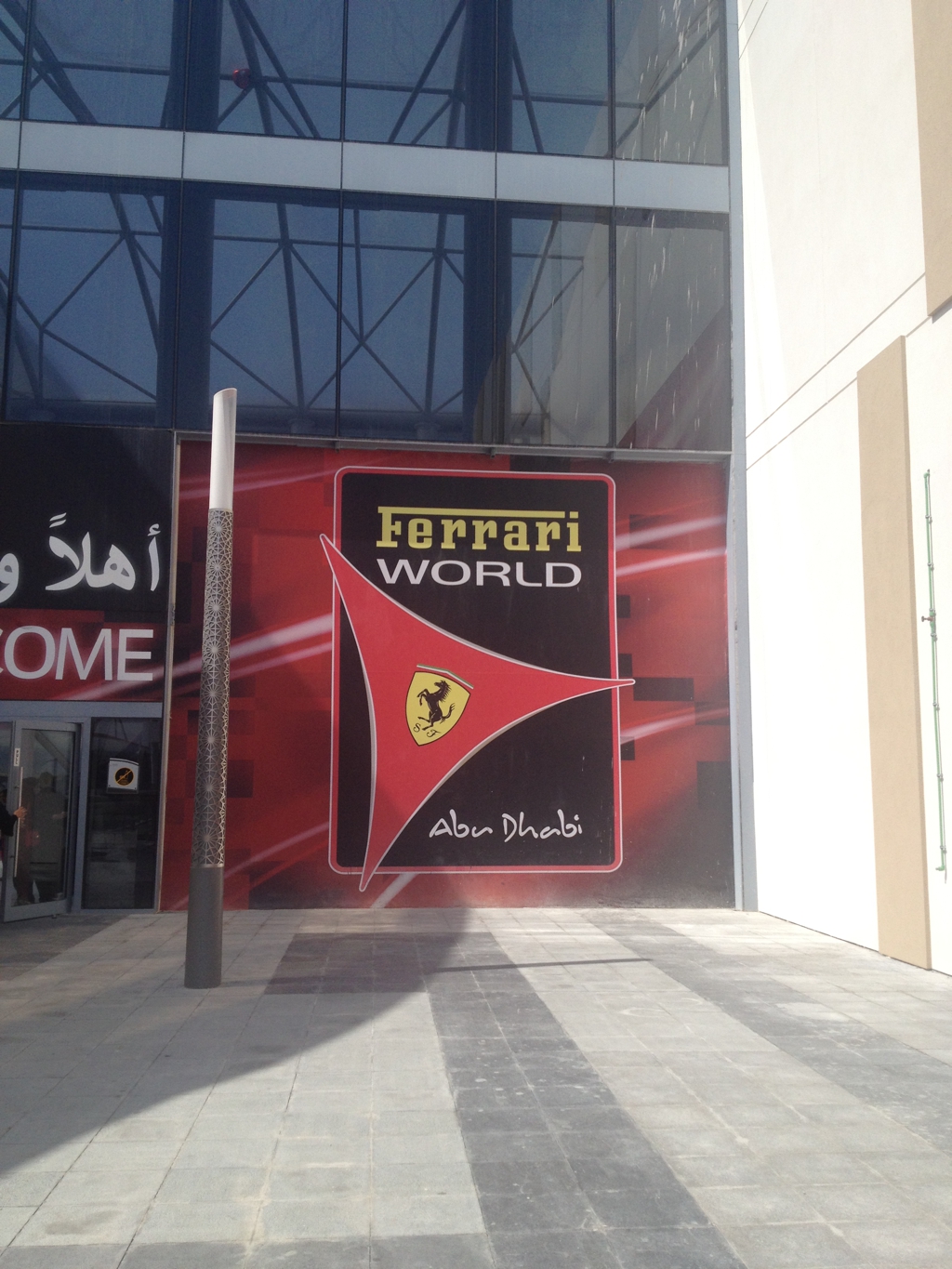 A must visit for the Formula 1 and Ferrari fans. I didn’t find it so especial, there is a theme park there, with one of the fastest roller coasters in the world, and of course a huge official merchandizing store of the scuderia. To access the park you need to pay an entrance fee – which is not cheap – but the entrance to the store is free. 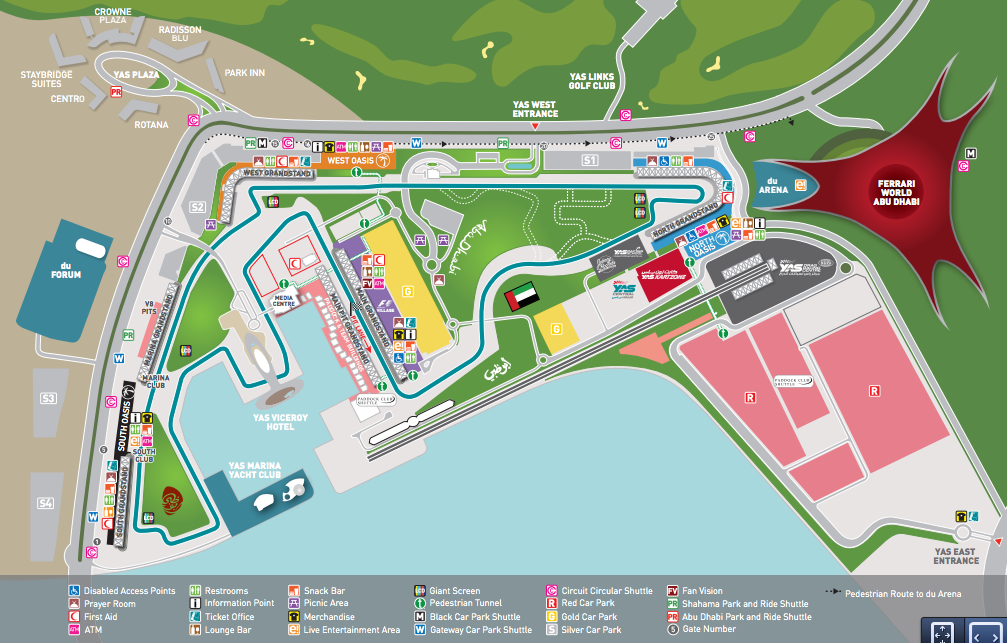 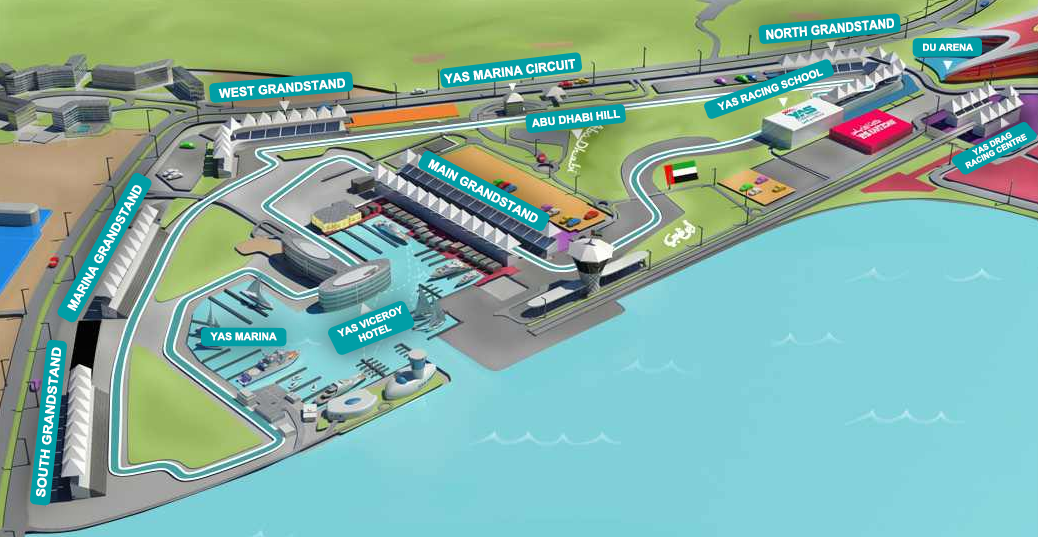