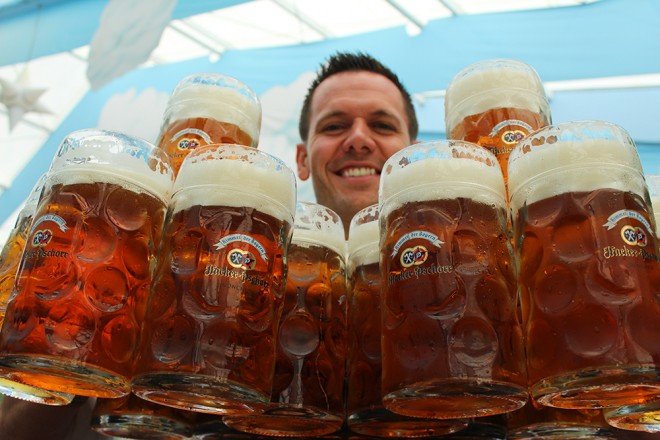 I am no waiter at the Oktoberfest, never was and never will be, but I can tell you from the start: it’s no easy job. You have to be able to carry heavy beer mugs, a huge tablet with food plates, deal with the drunkies, try to hear people’s order inside the noisy tents, and hear the same songs over and over again. All that during at least 15 hours per day, and of course, be ready for the following day, and do it again for 2 weeks. Could you do it?

I know, it’s probably easier to just be a guest and enjoy the festival, but guess what? Other people don’t think so. Some dedicate years of their lives to working at the Oktoberfest every year, that being as waiters, security, in the kitchen, filling mugs with beer and more. Some pass the tradition to the next family generation, in which the grandpa, father and son work together. That’s one of the things that never come to your mind when you think of one of the biggest events that happen in the world.

Now, to become a waiter at the Oktoberfest, it is necessary to start your career early. You need to begin working at smaller similar festivals that happen throughout the year in Bavaria, then the invitations start to appear. That is exactly how Peter – who has been a waiter at the Hacker Pschorr tent for the past 6 years – managed to become one of the Oktoberfest’s waiters. 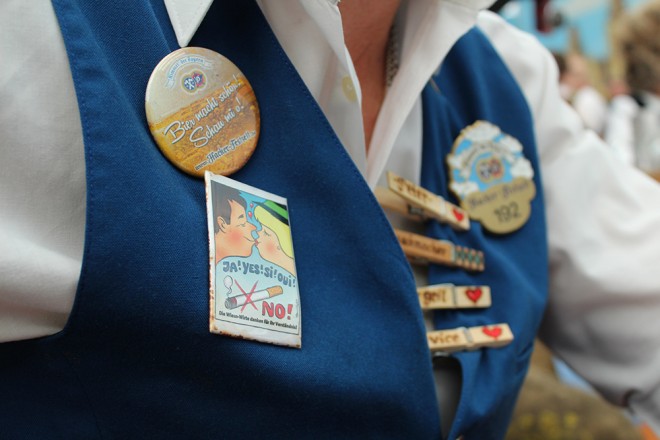 Peter is a friend of mine, and I have known him since my first year living here in Germany. As many other waiters at the festival, he has a normal job, and uses his extra hours of work to take a vacation during the 2 weeks of the Oktoberfest, so he can work there. Recently I was at the Hacker Pschorr tent and had the opportunity to informally ask him a few questions.

This year is a very sentimental and special one for Peter, it is his last year as a waiter at the festival. Talking to him I realised the significance of the past years for him, and how he will never forget being a part of the Oktoberfest. He has worked 9 years in two different tents, 6 only at the Hacker Pschorr.

So you want to know what’s like to be a waiter at the Oktoberfest? Nothing better than ask a pro, here is what Peter told me:

How did he start working at the Oktoberfest as a waiter?

He began working at small festivals near his town – Straubing – and with the years, the invitations were getting bigger, until he got the first offer to work at the Bräu Rosl tent at the Oktoberfest. Later on he started working at the Hacker Pschorr tent, which has capacity for 10,000 people. 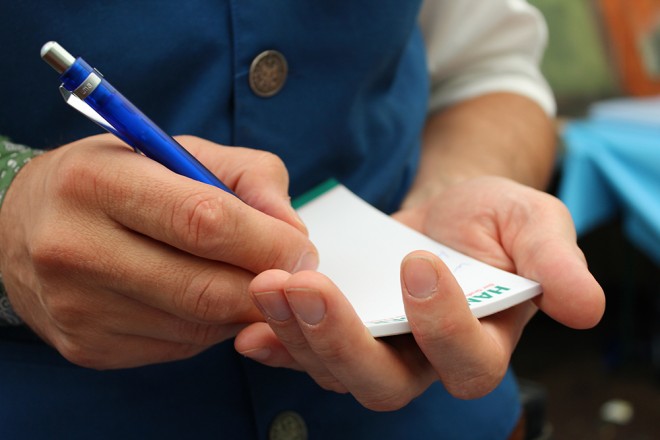 How long has he been working as a waiter for the Oktoberfest?

Yes. Basically every year by the end of the festival he gets a cold or loses his voice. It’s a lot of food and mugs to carry all day long going up and down the stairs.

He manages to carry 16 Maß – that’s about Enzzo’s weight – but says that his friend Nick handles 22! Now you don’t need to be an expert in beer to imagine how heavy that is. Just try to lift one mug and you will have an idea. 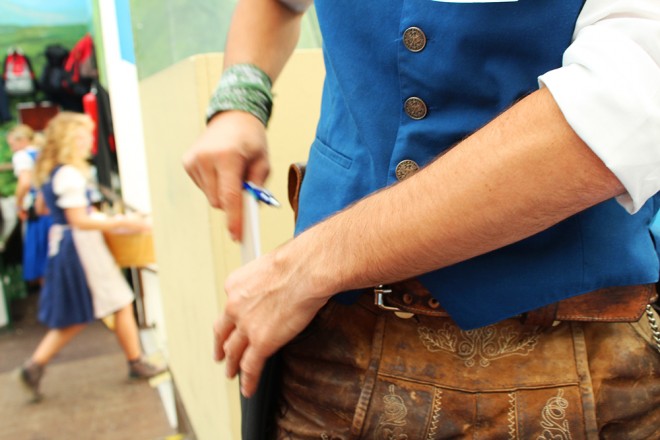 How many Maß does he sell in one day?

During a weekday he sells around 300, and during the weekend – a Saturday for example – he sells between 500 and 600 Maß. Make the Math; each mug has 1L. Man these people can drink!

How does he keep track on the number of Maß he sells?

Before he starts working he buys some chips at the tent’s counter at a cheaper price, each one represents a Maß of beer. The green ones are for the non-alcoholic beers, and the red ones for the normal beers. Each time he gets a new Maß to be served, he hands the equivalent amount of chips to the responsible person for the beers. 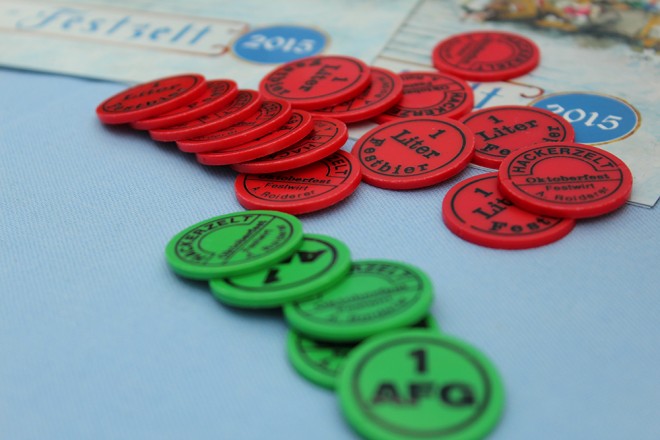 What was the record of Maß one person he served ever drank?

Is he allowed to drink a bit of beer during work?

What was one of the most crazy/funny things that happened to him during these years of working at the Oktoberfest?

He met a group of Scots who became great friends of him. Each year the group goes to the Oktoberfest wearing their Scottish costumes. They became so close that Peter even invited them for his wedding, and they came! 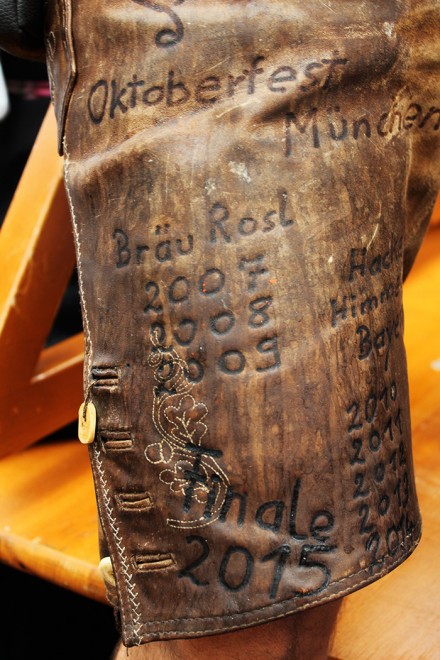 Does he wear the same Lederhosen during all days of the festival?

Not only everyday during this year’s Oktoberfest, but since 2007! Wow, that’s a lot of years to wear the same thing and not even wash it – that’s the tradition. And his Lederhosen doesn’t lie, it has an entire story to tell. Peter has used a soldering iron to mark special dates and sayings on his Lederhosen. He says this is not a tradition among the waiters, but he has made it a tradition for himself.

As he retires as a waiter of the Oktoberfest on the same day as this post is being published – the last day of this year’s event – there will be a ceremony for him at the tent. He will have to stick his Lederhosen with nails at one of the little trees of the tent, this will mark the end of his career as a waiter at one of the most famous festivals in the world.

What’s up with the tattoo?

It’s the banner of the region – Niederbayern – where he was born and where he started waiting at festivals that later on led him to the Oktoberfest. It is also a sign of how proud he is to be a Bavarian. 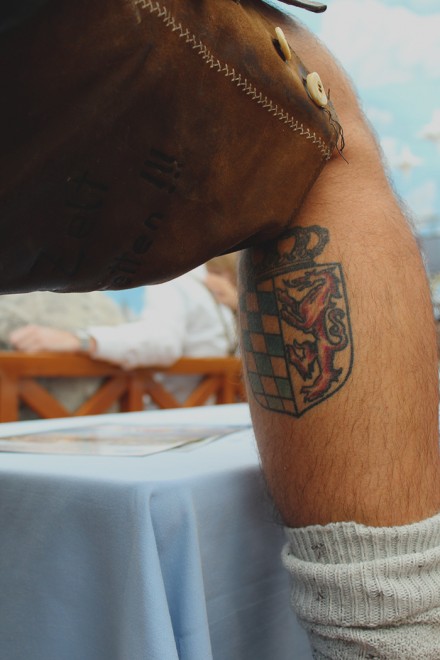 And the question everyone wants to ask: how much does he earn as an Oktoberfest waiter?

Sorry guys, there is a codex among the waiters not to reveal the real number. Even though I know the real amount, I am only allowed to tell you that they earn the equivalent of a used car – and there are some really nice cars out there, just saying. They earn a specific amount of money from the tent, but the most significant payment comes from the well-deserved tips!

Why is he retiring?

Is he going to miss working as a waiter at the Oktoberfest?

Definitely. He has met so many people, made great friends, and has so many stories to tell. The Oktoberfest will most probably be a part of his life forever. 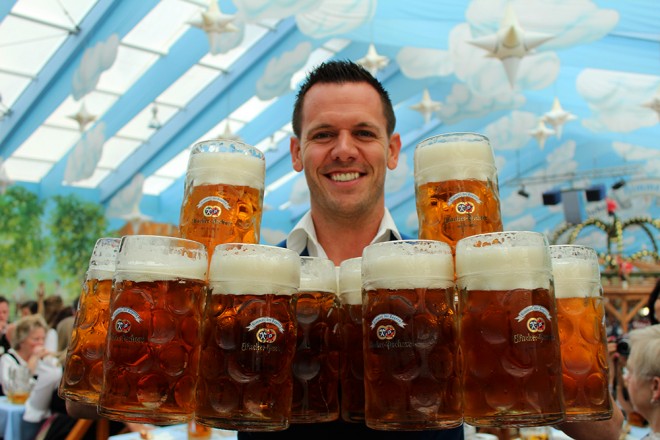 Would you like to be a waiter/waitress at the Oktoberfest? Do you have any questions you would like me to ask Peter?