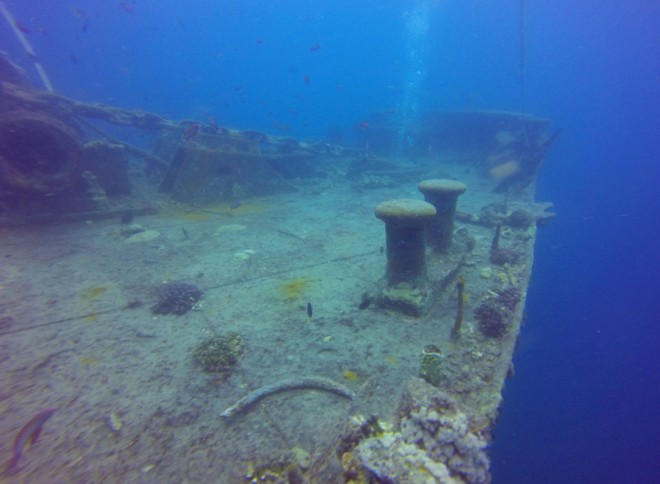 Diving is one of my greatest passions, and since I became a diver 1 year ago, I had no idea what kind of dive sites I was about to see, as well as the challenges I would face in some of them. Until now, I haven’t dedicated an entire post to a unique dive site. However, after seeing the shipwreck of the SS Thistlegorm sunken in the Red Sea with my own eyes, I simply had to.

A little bit of History

Apart from being considered the 3rd best dive site in the World, the SS Thistlegorm carries a very interesting story; reason why I believed it is worth sharing it with you. Even if you are not a diver, don’t ever pretend to become one or are pretty much scared of the ocean, you might as well want to read/look until the end of the post. I am about to take you for a dive in one of the most famous shipwrecks in the World with me, and you won’t even get wet!

The SS Thistlegorm was a British steamship of 126m length. It was launched in April 1940 and only made four trips, where the last one had no happy ending. The ship was mainly used for cargo; previous to its last trip it transported sugar, rum, grains and even steel rails and aircraft parts.

The last trip was originated in Glasgow on June 2nd 1941, and the final destination was supposed to be Alexandria in Egypt. The ship was transporting supplies for the Allied Egyptian forces during the World War II, and included railway wagons, trucks, armored vehicles, motorcycles, guns, cases of ammunition, rifles, radio equipment, aircraft parts and even Wellington boots (people still wonder why they needed these boots in the desert!).

On October 6th 1941, after facing challenges and anchoring in the safe F (how the location was called) the SS Thistlegorm was bombed by German bombers flying by the area originally on the search for the Queen Mary. Out of the 41 members of the crew, 9 did not survive. The location of the ship remained unknown until 1955, when Jacques-Yves Cousteau managed to find it following directions given by local fishermen. Back then, he did not reveal the location of the ship, which was only rediscovered in 1974.

With the development of the city of Sharm-El-Sheikh, recreational diving began to appear in the region, and in 1992 the precise location of the SS Thistlegorm was finally revealed. Since then, the ship attracts thousands of divers each year, and became one of the best and most popular dive sites in the World. 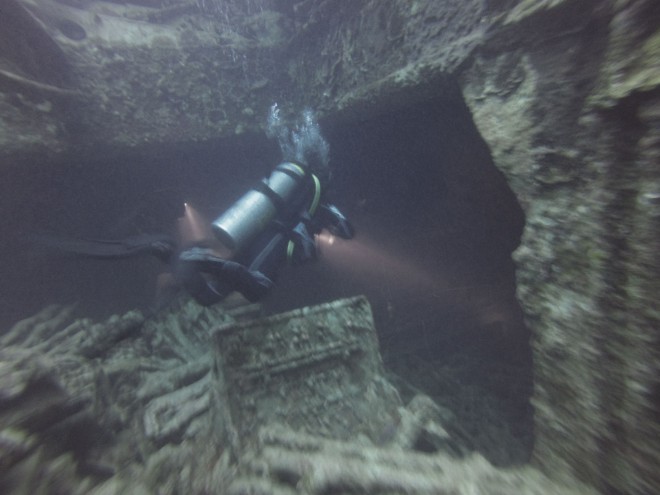 That would be me!

It is possible to dive the shipwreck by either taking a 4-hour boat trip from Sharm-El-Sheikh, or during a diving safari trip. The ship lies at the maximum depth of 30m and can be already seen at 13m. She is considered a “giant museum underwater”, and a unique wreck, where basically everything remained untouched since its explosion, during the WWII.

It is still possible to see unexploded bombs – yes, unexploded – lots of motorcycles, trucks, railway wagons and everything else that was on board the ship when it was sunken. The place is magically rich in marine life, fish are everywhere and you can lose yourself among them. 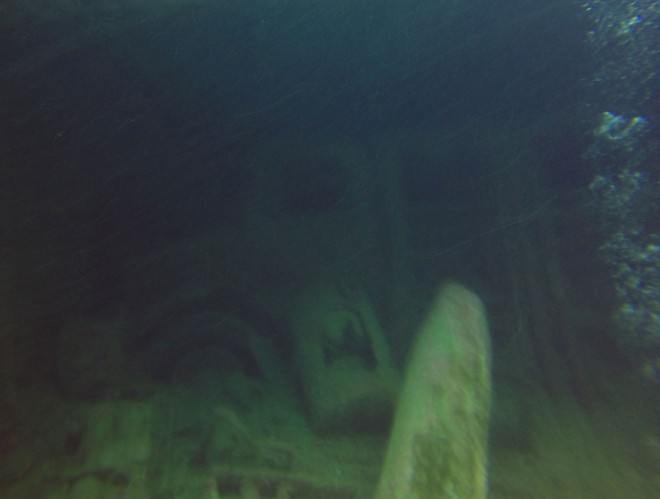 Can you see the truck? 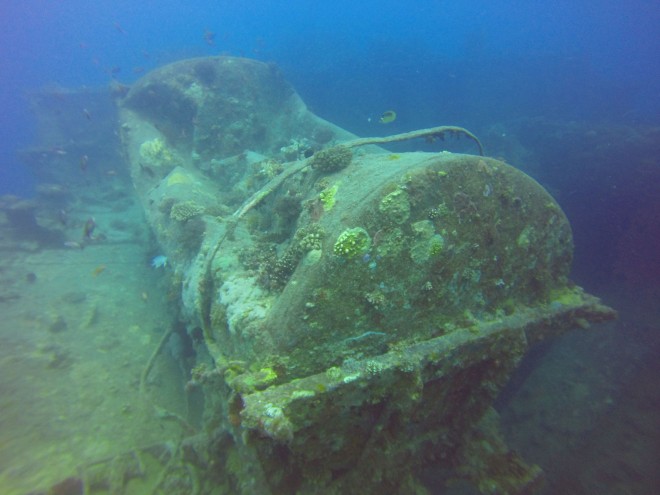 When going with a diving center, two dives are made in one day. Normally (depending on the current) the first one you can see the outside of the ship, and on the second one, you go inside, passing through its compartments. Here is an illustration so you have an idea how the dives are made: 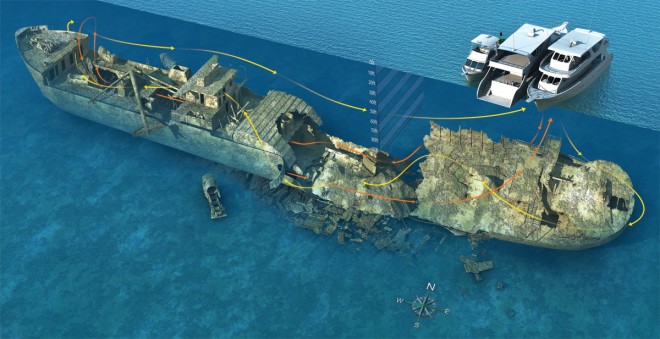 The dive begins after the dive guide ties a line on the wreck. Because the currents here are often strong, the divers need to go down following the line. The challenge is to find your boat’s line when returning to the surface, since the dive site is so busy with other boats. In any case, the important thing is to come up using a line. 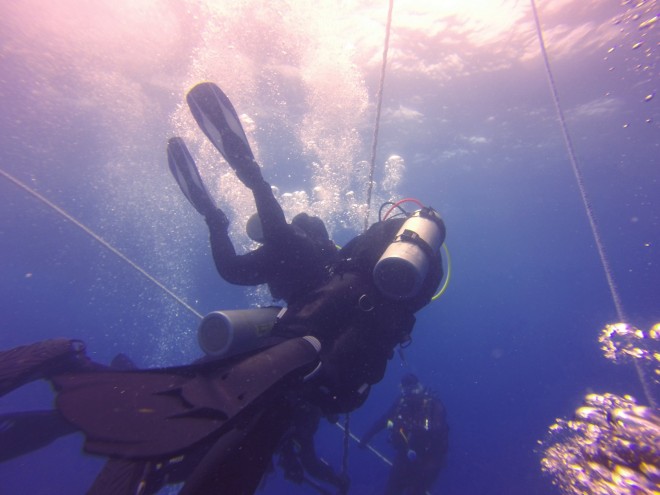 Traffic on the way up!

I have to admit, when I began to descend I felt like I was going nowhere. The visibility was very poor and I couldn’t see a thing, it felt like a night dive. The very strong current was shaking the line from one side to the other, and for a moment I thought: what am I doing here?! It was only when I saw that huge amazing shipwreck that I realized how worth while this dive was. 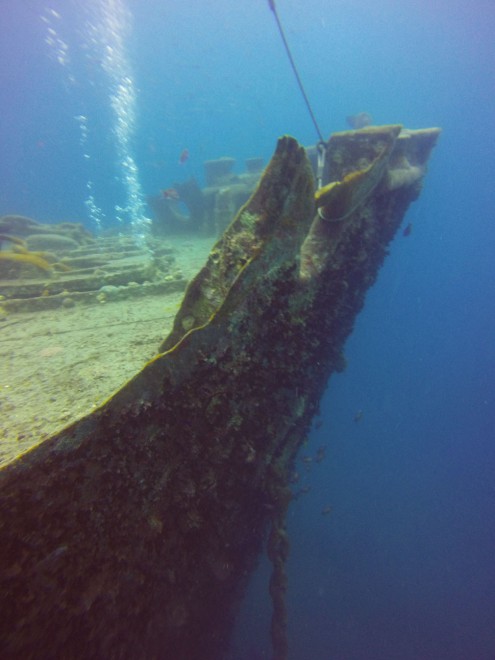 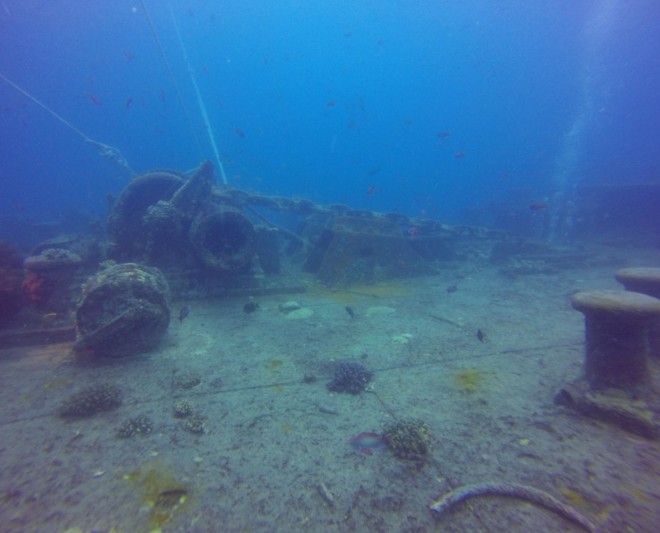 The first dive was a bit chaotic; too many people and fins around, some people from our group got separated for mistaking us with another group. While looking for them we had to hold on to the ship so the strong current didn’t carry us away. All went well and we got to see this giant WWII’s underwater museum from the outside. What a beautiful thing! 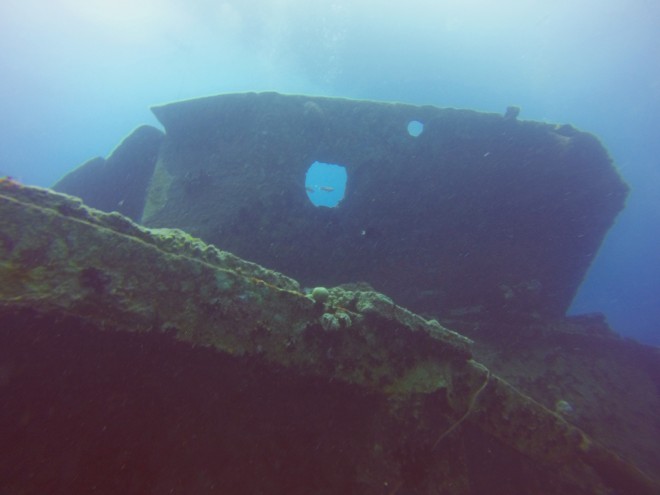 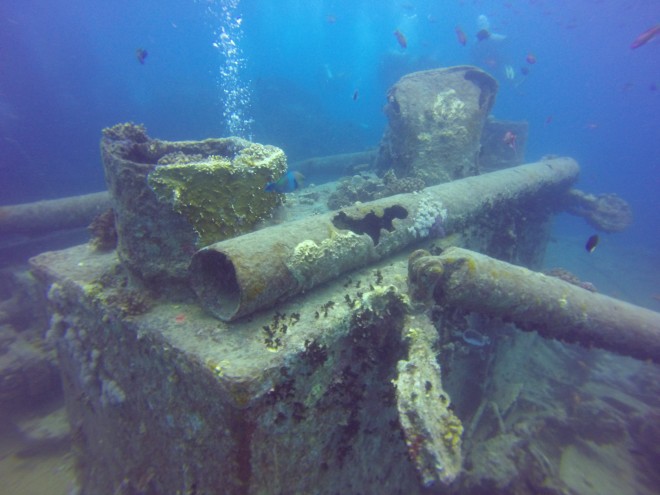 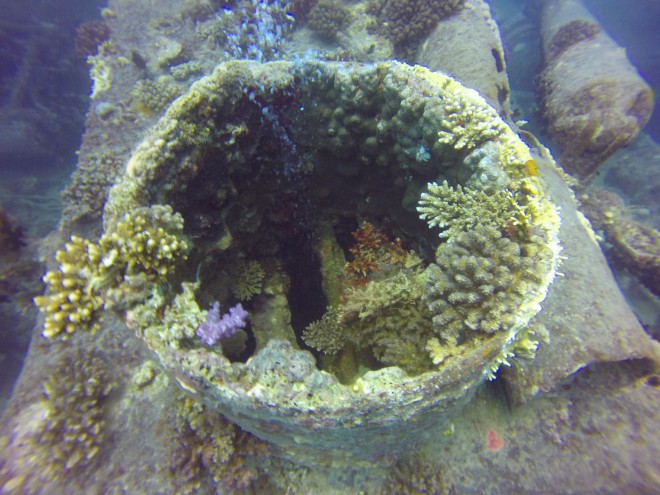 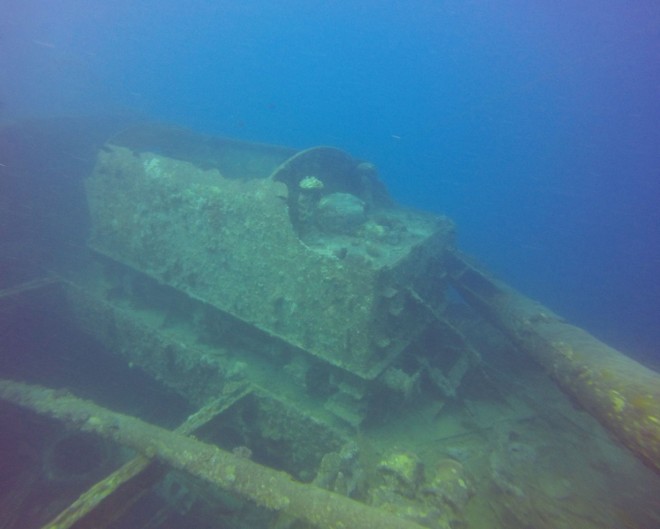 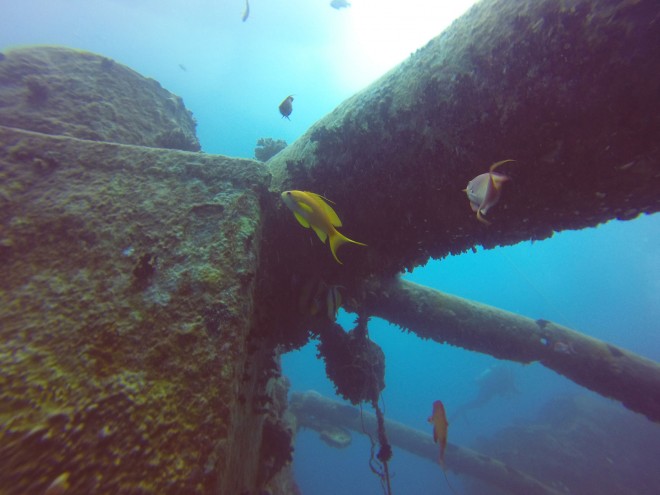 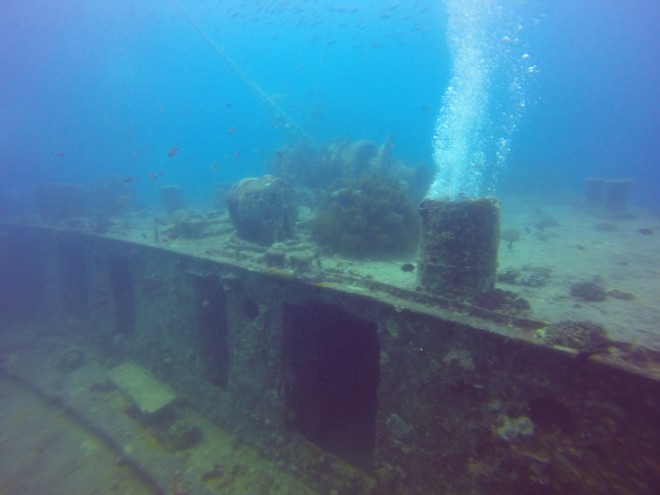 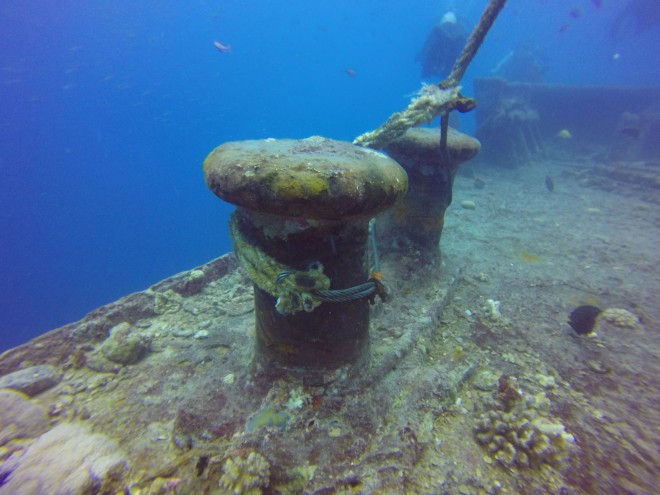 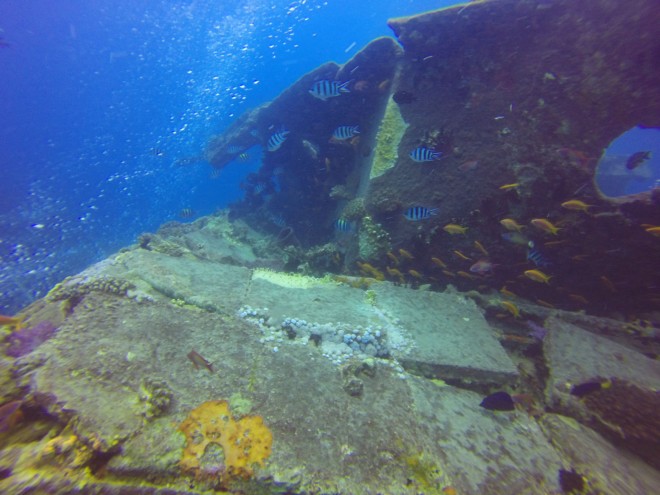 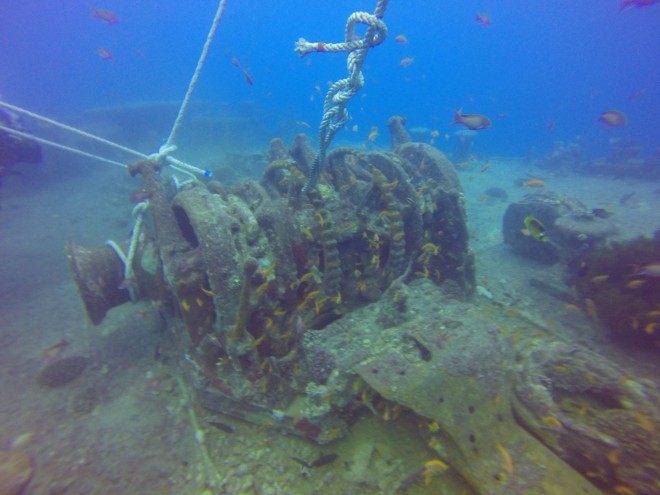 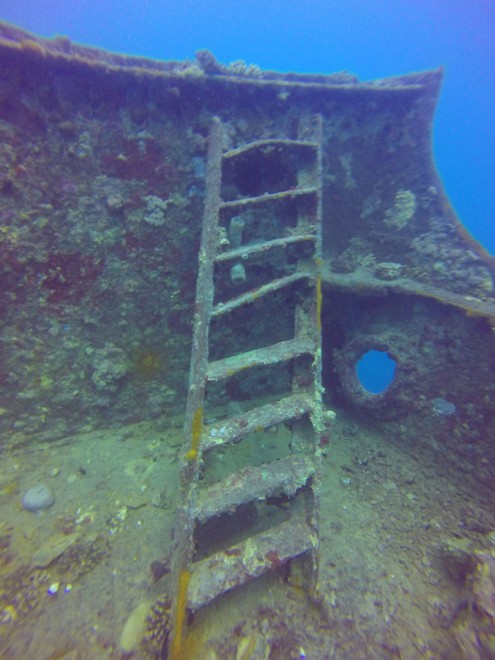 Happy for making back to the ship after the first dive, I was stronger and more prepared for the second one. This time our new inseparable friend was an underwater lantern. We were about to penetrate the ship, and to take a look on what is inside its compartments…

I told you I would take you for a dive didn’t I?! 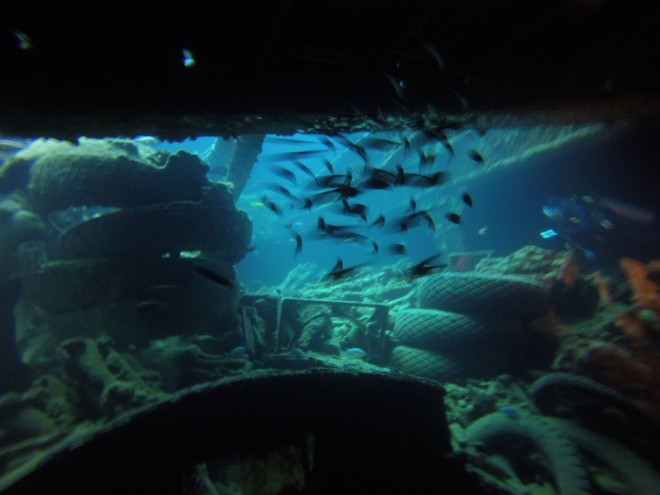 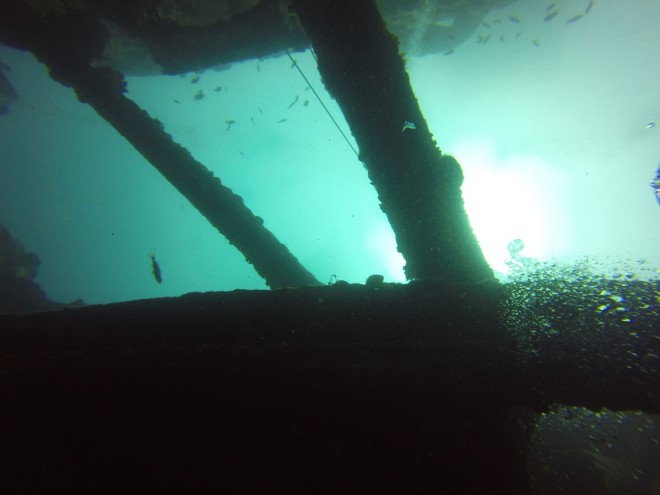 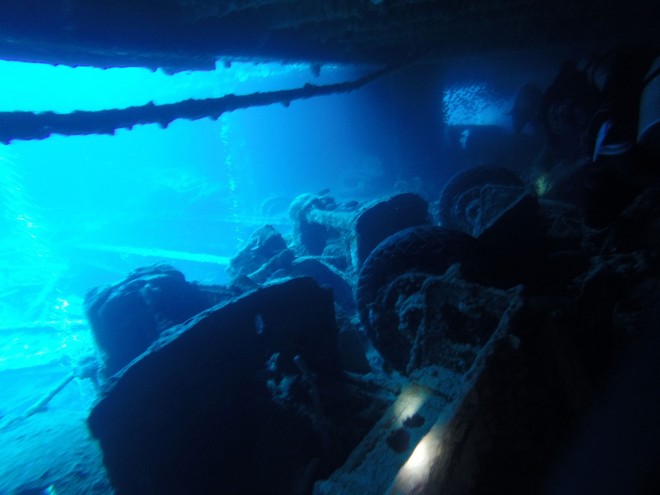 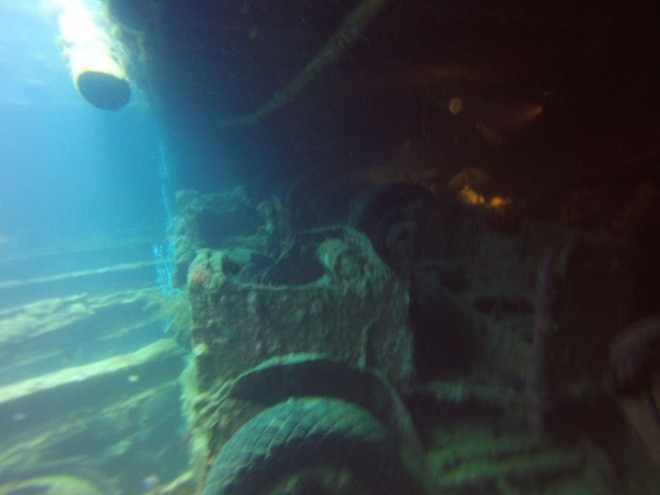 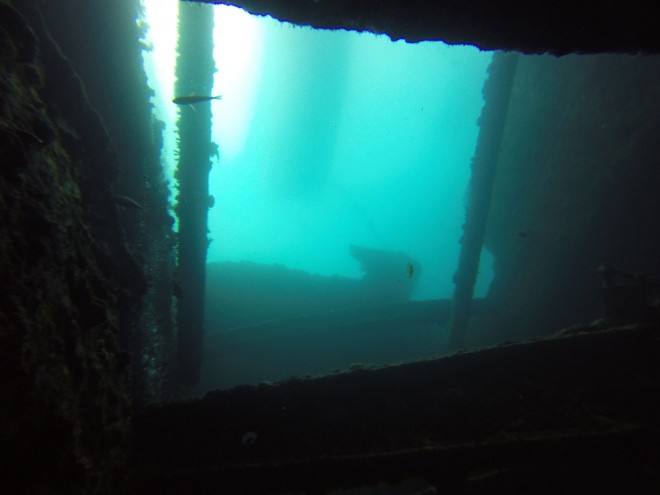 Since I was a child I dreamt of diving, of exploring huge shipwrecks underwater. When I entered that ship I realized I had accomplished my childhood dream. It was scary, adrenaline was taking over my body, but I couldn’t contain a smile. I did it! I am diving one of the most famous shipwrecks in the World at 28m depth, and it was my dive number 50! 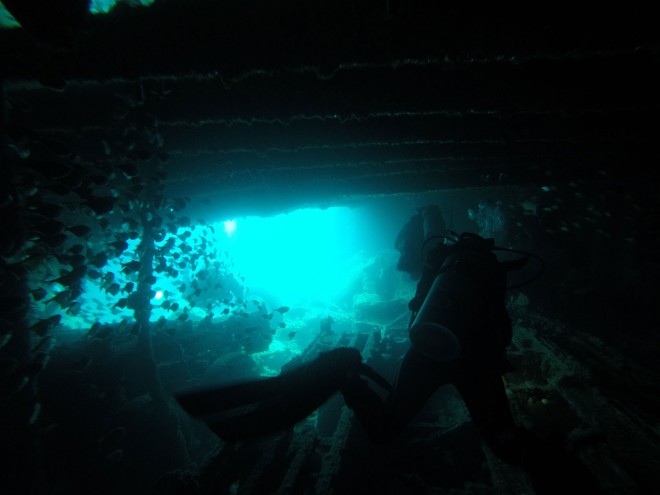 What an unforgettable experience. I was challenged in different ways, and I will keep the memories of this dive forever in my mind. Waking up at 4 in the morning and having spent over 8 hours on a boat were all worth it. And being the only Brazilian among the British and the German on the boat that day was an interesting fact. Speaking of Germans, a special thank you to W for making the underwater videos without my knowledge… I am glad he did it!

If you are interested on learning more about the SS Thistlegorm, you can check this website, read some of the published books about her or watch a documentary called “Thistlegorm’s last voyage” by Caroline Hawkins. 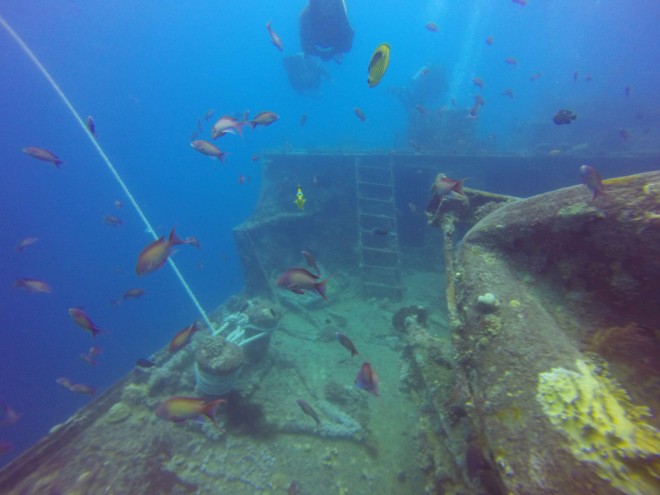