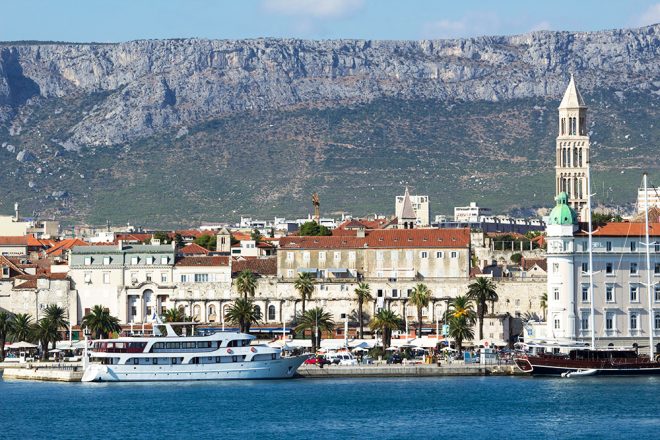 Located less than 1 hour by boat from Split, this Croatian island was on my bucket list ever since I saw a picture of its so famous beach, Zlatni Rat. When the opportunity to include the island in our Croatian itinerary appeared, I knew it was time to finally make it there.

Brac is part of the Dalmatia region of Croatia, and 3rd largest island in the Adriatic Sea, being 48km long, 14km wide, with a total of 394 square meters. Despite being so near to Split, the island isn’t as touristy as its neighbors Korcula and Hvar, far from it. The island’s main cities are Bol and Supetar, the first being the most popular choice to stay among the visitors.

After spending 4 days on the island, I felt like I could have used some of the information I only learned once I was there. Lucky for you, I have them all wrapped up here on my Brac Island for first-timers mini guide.

Even though we were there during the summer, we felt like the island was far from being packed. It was still possible to find many calm and secluded beaches, the roads were never busy, and the restaurants were never full. In terms of price, of course, for being an island things are more expensive than on mainland, but it still is an easily affordable place. 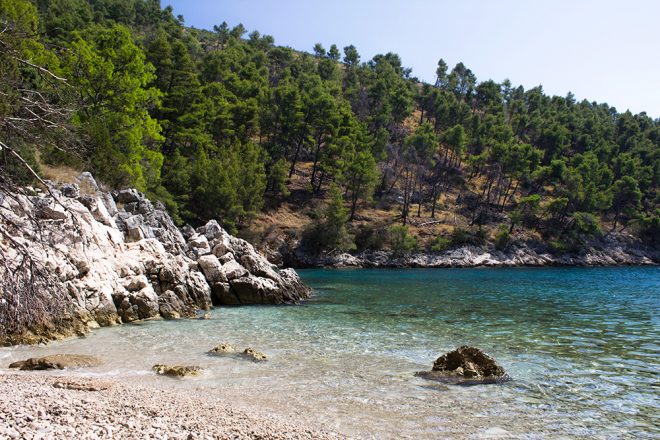 What to do on Brac island

Brac can keep you busy for a long time, and has activities for everyone, it all depends on what you’re looking for. Here are some of the best things to do on Brac Island:

Before anything, relax. On the beach, on a spa, on your bed. Islands are always more laid back, so depending on where you’re coming from, slow down and feel the vibe. 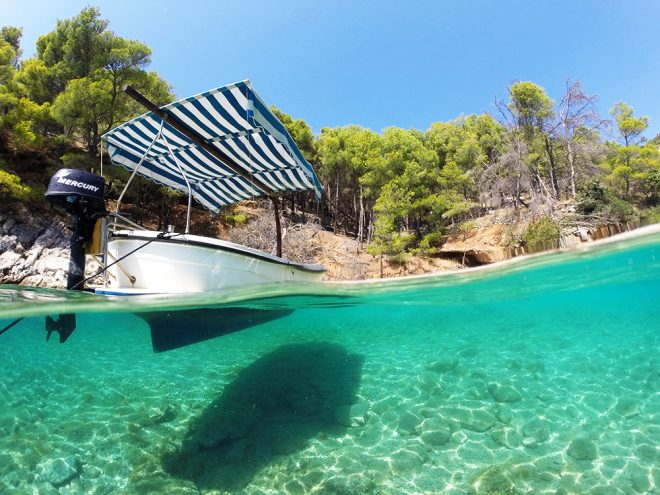 One of the best things I did, not only on Brac Island, but in general. Even if you don’t have a boat license, it is possible to rent a small boat with an engine up to 50hp, which you can take to nearby beaches along the coast. Most of these beaches are secluded and hard to be accessed by car or on foot. We rented our boat with Afitat, in Bol, and were very happy with the service.

We got to spend the day on a secluded beach only to ourselves*. With a small boat like we had, you’re allowed to go maximum 1 hour to each side of the island**, and no, you are no allowed to cross to Hvar island. 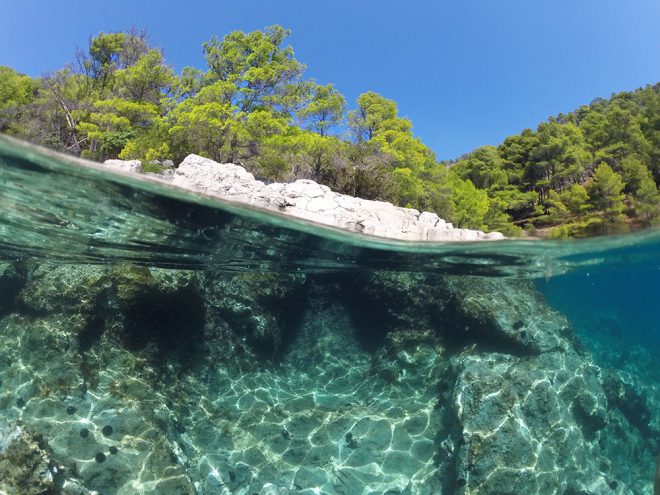 *Dogs are welcome on the boats.
**You can take your boat from 9am and return to the harbor at maximum 6pm.

Tip: take snacks and drinks with you so you can enjoy the day away with the boat (Afitat’s boats have a cooler box).

The Riva is the harbor area in Bol. It is a beautiful part of the city, and where you find many restaurants and bars, great for a stroll early in the morning and at the end of the day, to grab something to eat or to enjoy the night away. 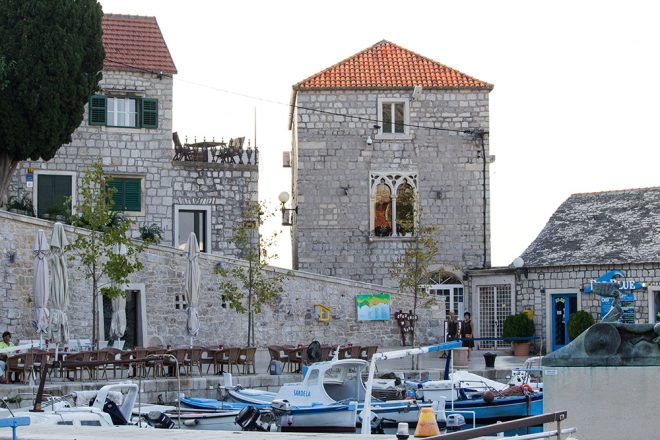 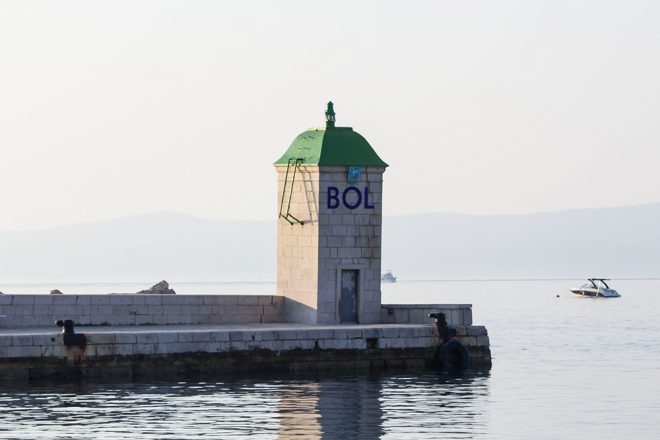 If hiking is your thing, you’re going to love Brac. There are many hiking trails around the island, one of them include Vidova Gora and the Dragon’s Cave (which we didn’t manage to find the entrance. Apparently you should book a tour with a local company to get there).

Zlatni Rat Beach is one of Croatia’s postcards, and as all famous attractions around the world, it is also a busy one. So if you ever see a picture in which the beach is empty, it was probably taken during the winter or photoshoped, because the place is very busy during the summer. This all means that you’re not going to be the only one wanting to have the beach for yourself and swim alone in the beautiful waters of the Adriatic Sea. In that case, just accept that you will be sharing this paradise with others, go to one of the cocktail bars, get a puffy and comfortable chair and have a cocktail. 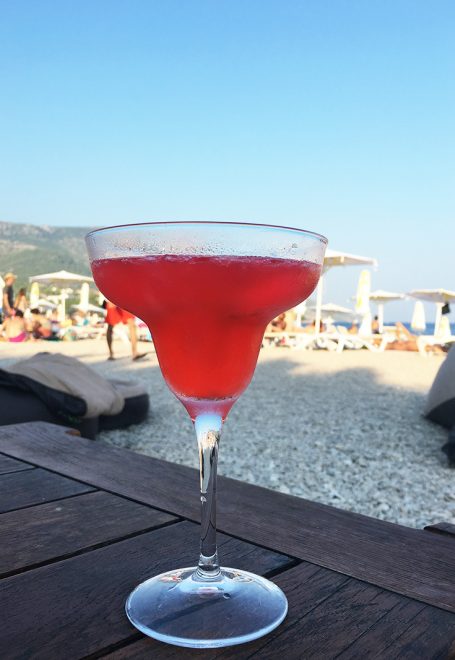 It is possible to do wine and olive oil tasting on the island. Especially olive oil, you will find many places offering this activity, as it is one of the main products of the island.

See the island from above from Vidova Gora

Vidova Gora is the highest point on the island, from where you have a breathtaking view of not only Brac, but also of its famous neighbor island, Hvar. Go up there for the sunset, when is not so hot and great for photography. You can hike up or drive (there is a parking just a few meters away). 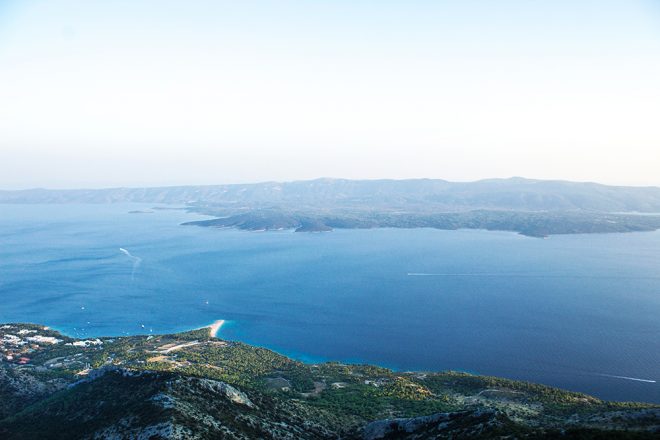 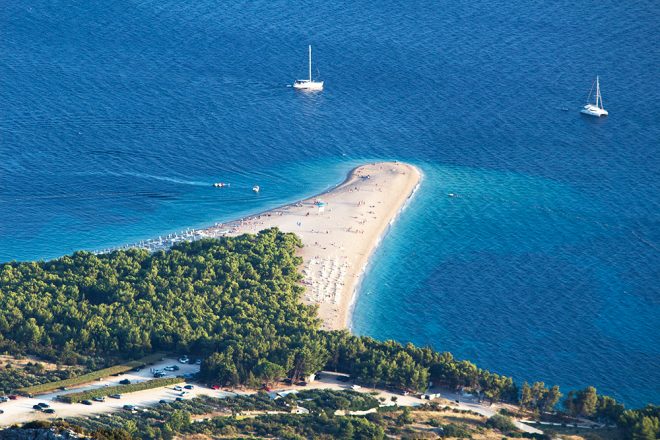 From Brac Island it’s possible to take a day trip to Hvar, Vis Island, to blue caves, and more. If you’re staying long on the island, it’s worth taking the time to visit nearby islands.

Water sports activities are very popular around Brac, varying from Diving to Parasailing, Kite and Wind-surfing. The island’s side where Bol is located can be very windy, which is very favorable for some of these activities. If you practice some of them, this is your place. 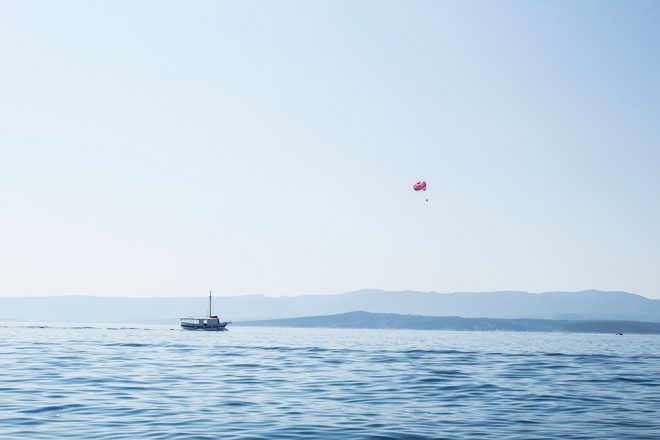 Explore other parts of the island

Brac is not only about Bol, there many other pretty villages and amazing beaches around the island. The best thing is to get exploring and discovering other places. For example, the area around Sumartin and Povlja are more secluded, with beautiful beaches.

Whether you’re a morning person or not, don’t miss the sunrise on Brac, it’s breathtaking. A special place to see it is from Zlatni Rat beach.

More things to do on Brac, you can find on the app All In Brac. 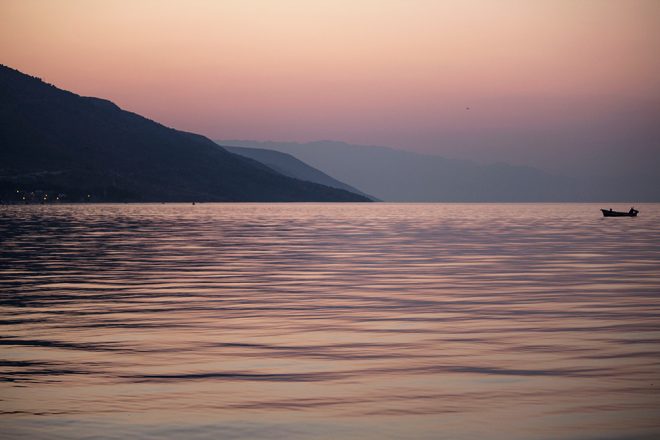 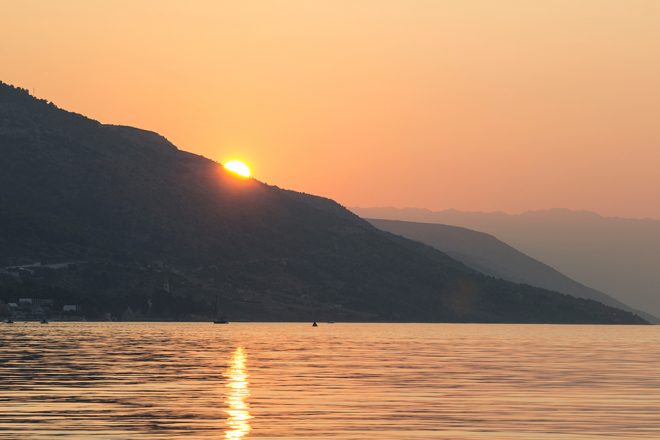 Where to stay on Brac

I highly recommend to stay in Bol, the main city on the island. Even being the busiest, it still doesn’t mean it isn’t quiet. However, if you’re looking for more quiet and affordable villages, you might want to consider Milna (not to be confused with Milna in Hvar), Supetar and Sumartin.

You can choose to stay in a hotel or rented apartment. We always like to enjoy the Croatian coast and islands by staying in a self catering apartment. 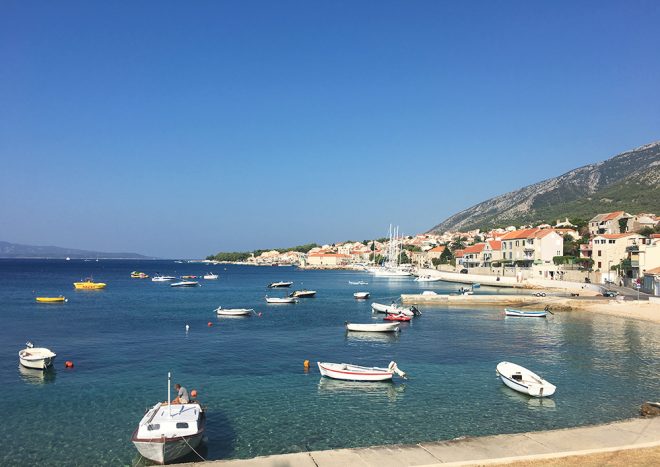 Getting around Brac Island

The best way to explore Brac is with a car, sometimes you might need 1 hour to reach another part of the island, even though the roads are good. You can also choose to rent a scooter or a quad, which can be done in many places around the island, especially Bol. If you arrived in Croatia by plane, you may want to rent a car in Split or Dubrovnik, for example.

The roads on Brac are well signed, you won’t get lost. However, having a NAVI might save you a lot of time. It can be very useful to find a gas station and supermarkets around the island. 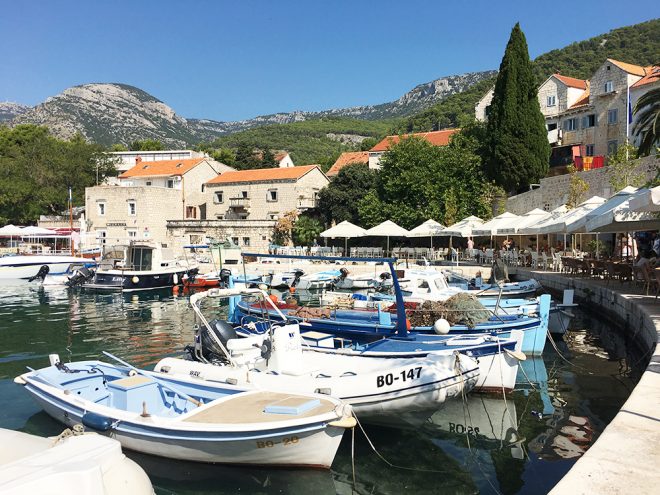 Getting to Brac Island

You can easily get to Brac Island from Split, Makarska, and since 2016, it is also possible to travel from Dubrovnik, either on day trips, with car or passenger ferries or with an airplane.

By car and passenger ferries

One important thing you need to know about getting to Brac island is that there are two different types of ferries you can take, both operated by only one ferry company, Jadrolinija. One is a car ferry, the only option you have to take a car to the island, and the other is a catamaran, which is a speed boat for passengers only. 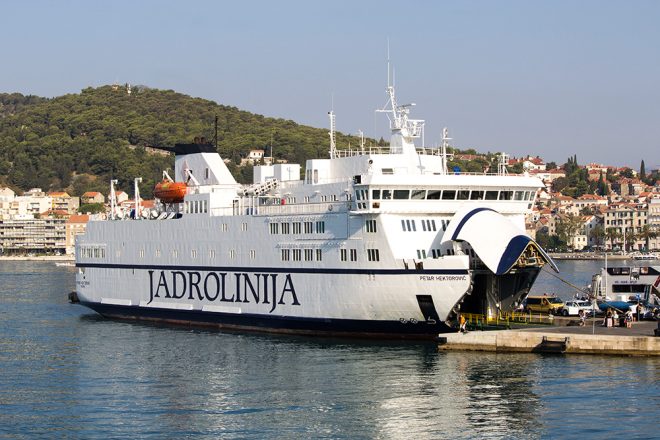 From Split to Brac

Duration: 50 minutes
With a car: the only car ferry route available is to Supetar.
As a passenger on foot: you can go to Supetar, Bol and Milna.

From Makarska to Brac

Duration: 1 hour
With a car: the only car ferry route available is to Sumartin, and there are few options in comparison to Split to Supetar.
As a passenger on foot: since there are no catamarans from Makarska to Brac, you can take the car ferry.

From Dubrovnik to Brac

Since 2016, Jadrolinija started to offer a catamaran (for passengers on foot only) from Dubrovnik to Brac. However, this route works only during the summer.

*Dogs are allowed on board both car and passenger ferries.
**For car ferries you need to buy a ticket, which you will have to pay a fee for the car + for each person (no need to pay for pets).
***Car ferries have an air conditioned room and an open deck for the passengers. It is possible to buy snacks and drinks on board, and there are bathrooms.

Brac Island does have an airport, however flights to the island are only operated during the summer season. Croatia Airlines operates twice per week a direct flight from Zagreb to Brac Island from May to October. Apart from that, most flights are charted. 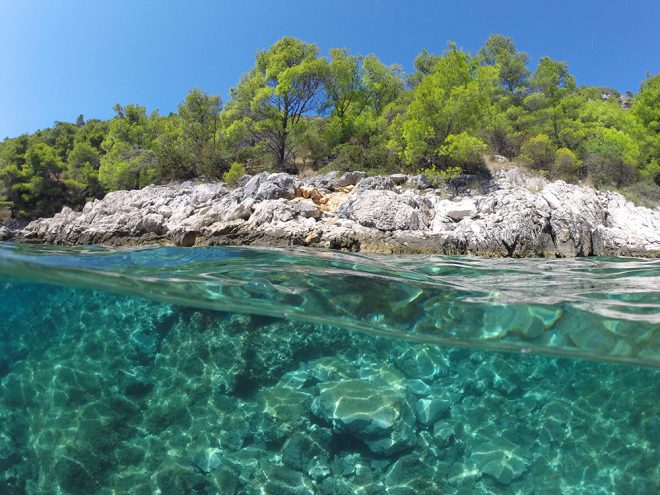 Some curiosities about Brac Island 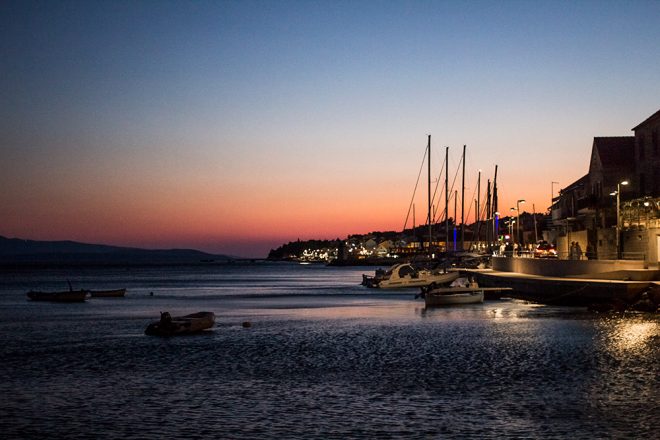 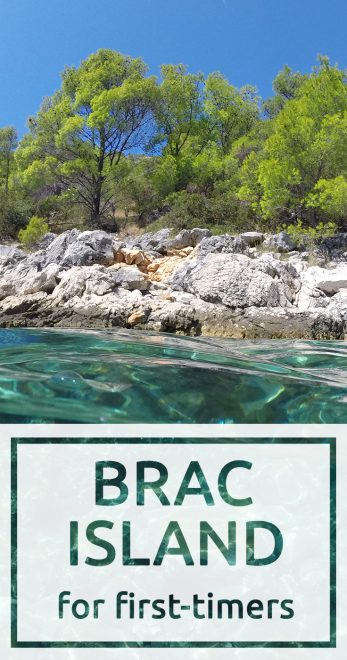