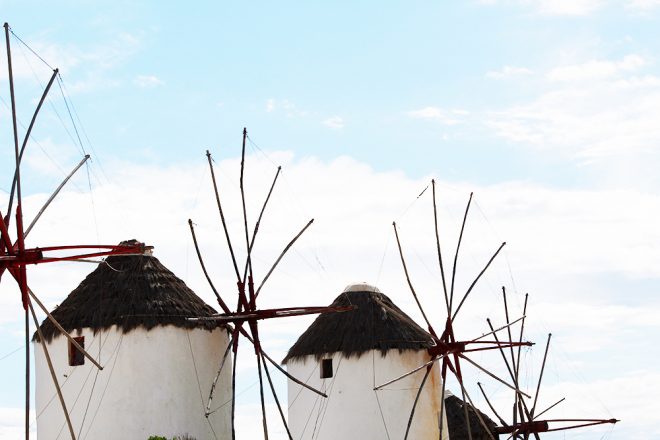 It’s hard to tell looking at how popular this Greek island has become in the past years, but in the 1950’s Mykonos was a simple finishing island. Back then, probably no one would have guessed that the place was going to become the most popular island in the country for luxury, parties and extravagance.

Mykonos is worldwide famous among the rich and celebrities, couples, party goers, and teenagers. Every day there is at least one enormous cruise ship docked at the island’s port, and as the summer season arrives, this number goes higher each day, together with luxury yachts and private boats.

Some claim that with all the fame and high number of tourists, the island has lost its authenticity and culture. That was also my first impression as soon as I stepped foot on the port, especially because I was coming straight from other two totally different Greek islands, Astypalea and Paros. However, if you are willing to see a different Mykonos, the real Mykonos, all you need is to wake up early. Yes, that simple. Well, for the party goers not so much.

On our last day on the island, we woke up early to get some pictures and videos of the center city. Our hope was to have the least people in the middle as possible. Well, it worked, and we didn’t even need to wake up so early, at least in May the city seems to only wake up at 10am or later. What we saw at 7am – 8am were empty streets and cafes, fishermen and many local elderly people, a quiet Little Venice and for the first time we were the only ones at the windmills. Worth it!

Before our trip to Mykonos, I honestly had no idea what to expect. We’ve heard many different experiences along the way, good and bad opinions. We had lots of help from a friend who lives on the island, but not everyone gets this kind of help, so I decided to help you out based on our experience during our 3 days on the island, and created this basic guide of Mykonos for first-timers. 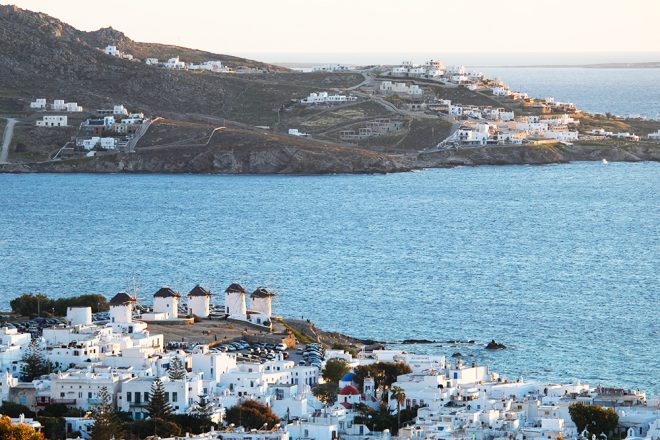 Mykonos is one of the easiest Greek islands to reach: 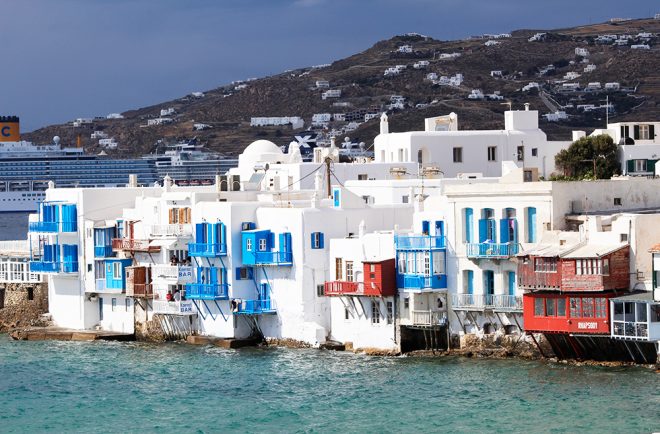 Know that getting a taxi in Mykonos can be very tricky, to say the least, so if I were you I would avoid relying on this type of transportation. Instead, I would highly recommend you to arrange a transfer from and to the port/airport with your hotel, and to rent a car while in town or even in advance. I know that some rental companies like the one we hired, iCar, can drop you off at the port/airport when you are leaving without any extra cost.

The port is within waking distance to the center city, so if you are on a cruise and are only spending the day on the island, you can easily walk between them. Though if you are staying longer, renting a car is no doubt the best option, as it is the best way to reach the beaches and explore others parts of the island.

Keep in mind that in Mykonos there is also traffic and parking can be hard to find sometimes, especially near the center. It is also important to mention that the roads connecting the city to the beaches and the airport are quite narrow and dangerous. So if you are driving in Mykonos, take extra precautions, remember that this is a party island and you may find many drunks around (true).

During the high season there are also city buses, which might be handy for many people. As soon as you get there try to get the buses schedules and routes, it might be useful. 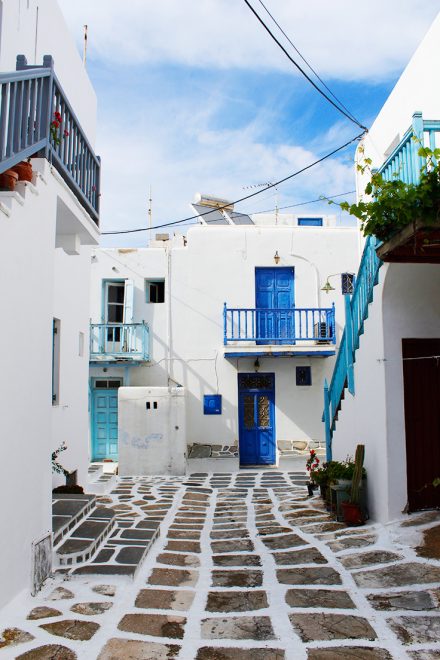 Choosing where to stay

Accommodations in Mykonos vary from hotels, hostels, guest houses, and rented apartments and houses. Unless you are on a yacht, on a cruise ship or have friends who live in town, you will have to pick one of these options. But where?

If you don’t mind the noise, stay in the center city. If you prefer quiet places, there are many options near the beaches, as well as some not so far from the center. Know that you don’t have to stay in the city center to enjoy the island, just rent a car or motorbike to get around, everything is easily reached within maximum 20 – 30 minutes.

Fun things to do

If there is one thing you shouldn’t be worried about in Mykonos, that is to keep yourself busy. The island has plenty to offer, and here are the top fun things to do in Mykonos:

Mykonos has several beaches for you to pick from. Beach hopping was one of my favorite things to do on the island, each one was a surprise, some prettier than others, some calmer than others. We visited 6 beaches in total, and even though Paradise Beach and Super Paradise Beach are very famous, my favorites were Paraga, Agrari and Kalafati. 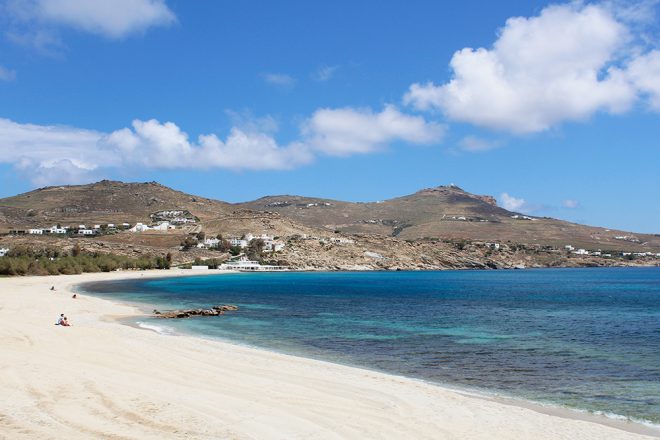 Tip: forget who ever mentioned to you that you can get from one beach to the other on foot, don’t venture yourself on this one. Get a quad, motorcycle or car.

Enjoy the views and the sunset 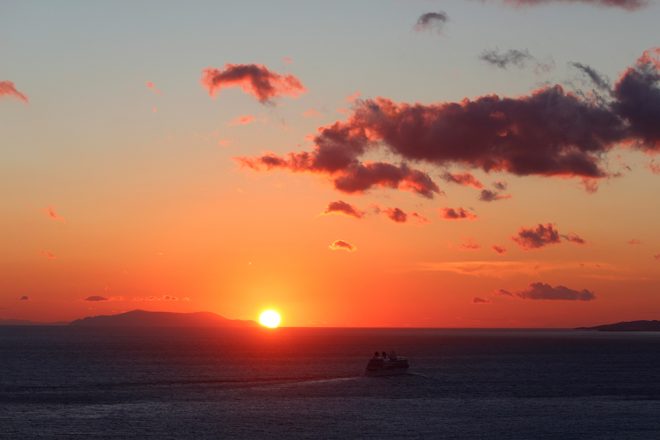 Mykonos is a sunset type Greek island. Why do I say that? Because each island has its “specialty”, sunset or sunrise. Astypalea is best for sunrise, for example, while Mykonos is for sunsets. The most famous place to watch the sunset on the island is Little Venice, though it doesn’t mean it’s the only good one. Many places offer a spectacular view over the island, find one, wait and see. 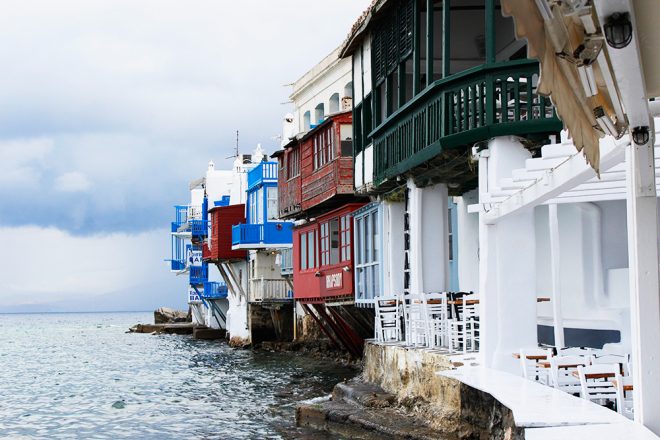 This place is something. Despite how touristy it is (no wonder) this place has character and it’s one of the prettiest I’ve seen in Greece so far. Early in the morning is empty, as the day goes by, it’s a challenge to find a vacant place to sit.

The windmills of Chora 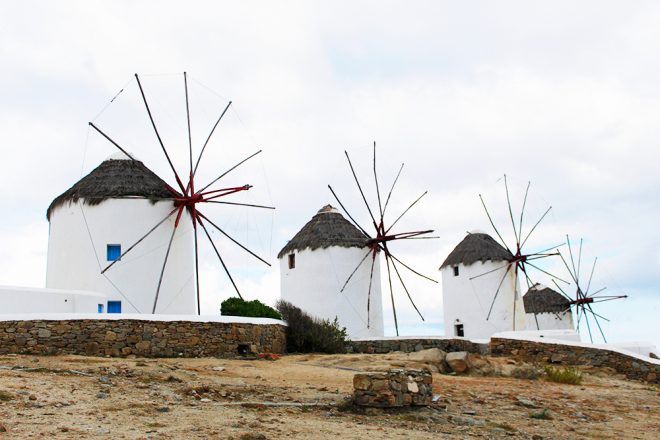 The postcard of the island, the so famous windmills of Chora (town). They are no longer in operation, but were once an important source of income to the island, as they were previously used to mill wheat until the 20th century. Nowadays, some of them were turned into museums.

Great news to the shopaholics, Mykonos is also famous for this activity. On the island you may find boutiques from local and international designers, jewelry and souvenirs stores, and much more.

Wander the labyrinth of Chora 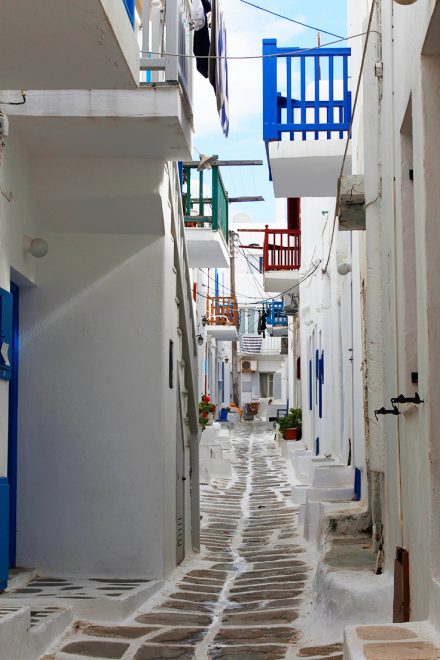 Chora, which means town, is the city center of Mykonos. There is where you find Little Venice, the windmills and of course, those pretty narrow and colorful streets you expect to see on the island, which make up for a labyrinth. This was my favorite thing to do while I was there, getting lost in this pretty labyrinth of narrow streets. Each turn you find something different, every step taken, a picture; good thing we were not in a hurry. 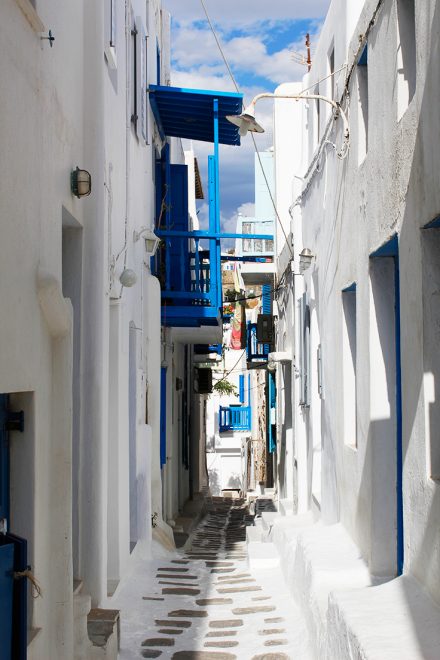 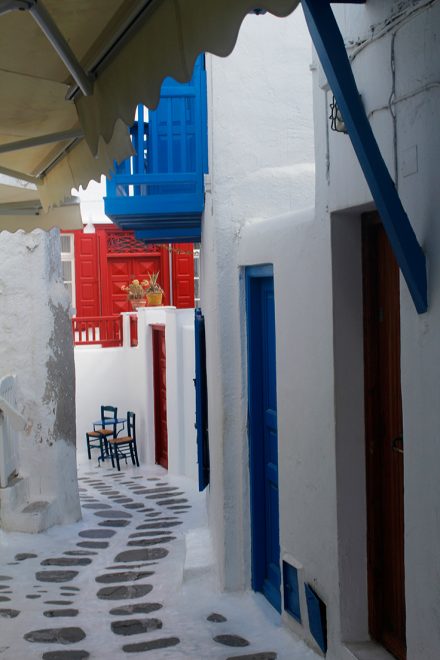 If partying is the reason why you are going to Mykonos, then you are going to the right place. There are endless options for enjoying the night out on the island until the sun rises. One of the most famous clubs in town and in the world is Cavo Paradiso. 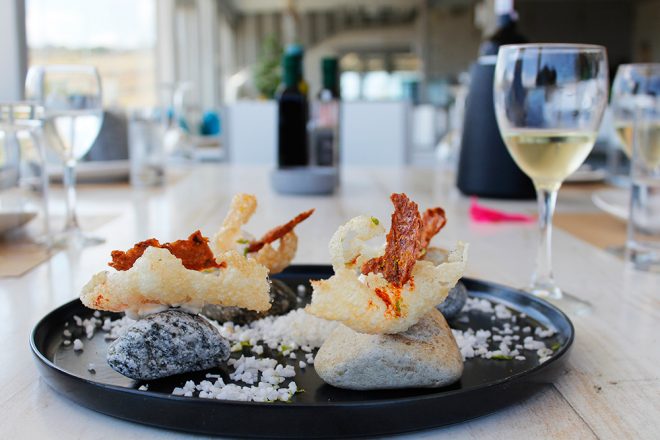 Since partying isn’t really my thing, I was happy to know that Mykonos is also famous for its gourmet restaurants. We tried the so famous Remezzo, an experience not to forget, and the newly opened and wonderful Nesaea.

Half a day trip to Delos Island

With boats leaving daily from the old port, visiting Delos island is another activity to do while in Mykonos. The island is a UNESCO World Heritage and according to the Greek mythology, it’s where Apollo was born.

Unfortunately, because of the rain that was constantly coming and going, we decided not to risk and visit the island (reason for us to return). Tickets between both islands can be bought last minute at the old port or you can choose to take an organized tour with a local company.

Tip: for more ideas on what to do in Mykonos, where to eat and drink and much more, download the app Mykonos by Life Think.

Expect to experience a very busy island, especially in the high season during the day, as all the tourists from the cruise ships make their stop. Expect crowded streets, amazing sunsets, mouth watering food, and some of the best beaches in Europe (according to a beach lover, me). 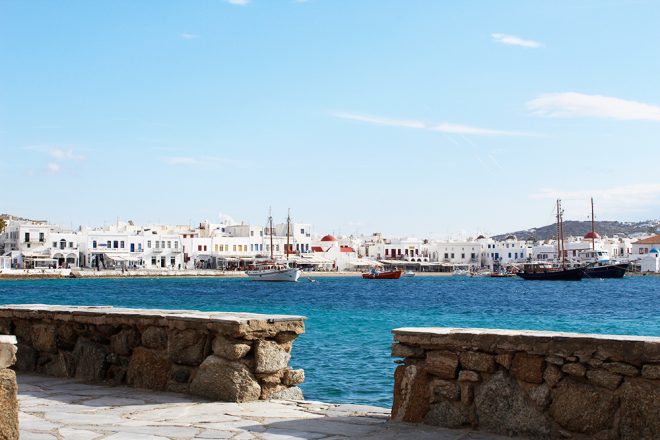 Things you should know before you go 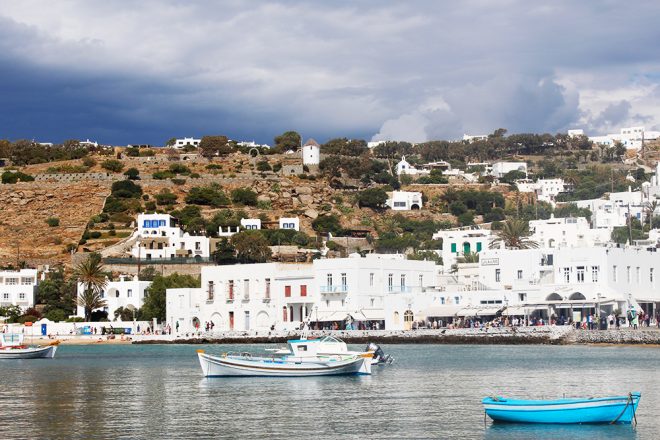 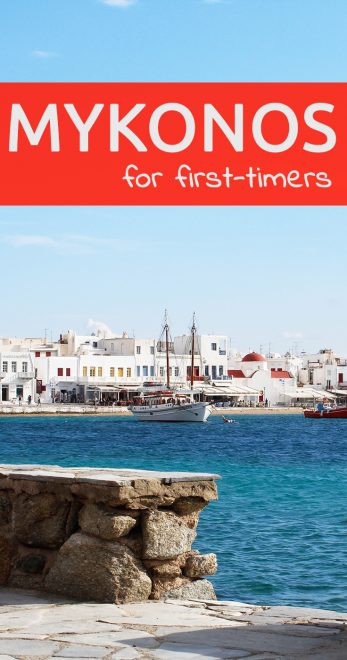 On our trip to Mykonos we were invited by Nesaea restaurant for a gourmet experience and we got a discount to rent a car with iCar. As always, all opinions are my own and I only recommend what I like and believe that my readers will like too.