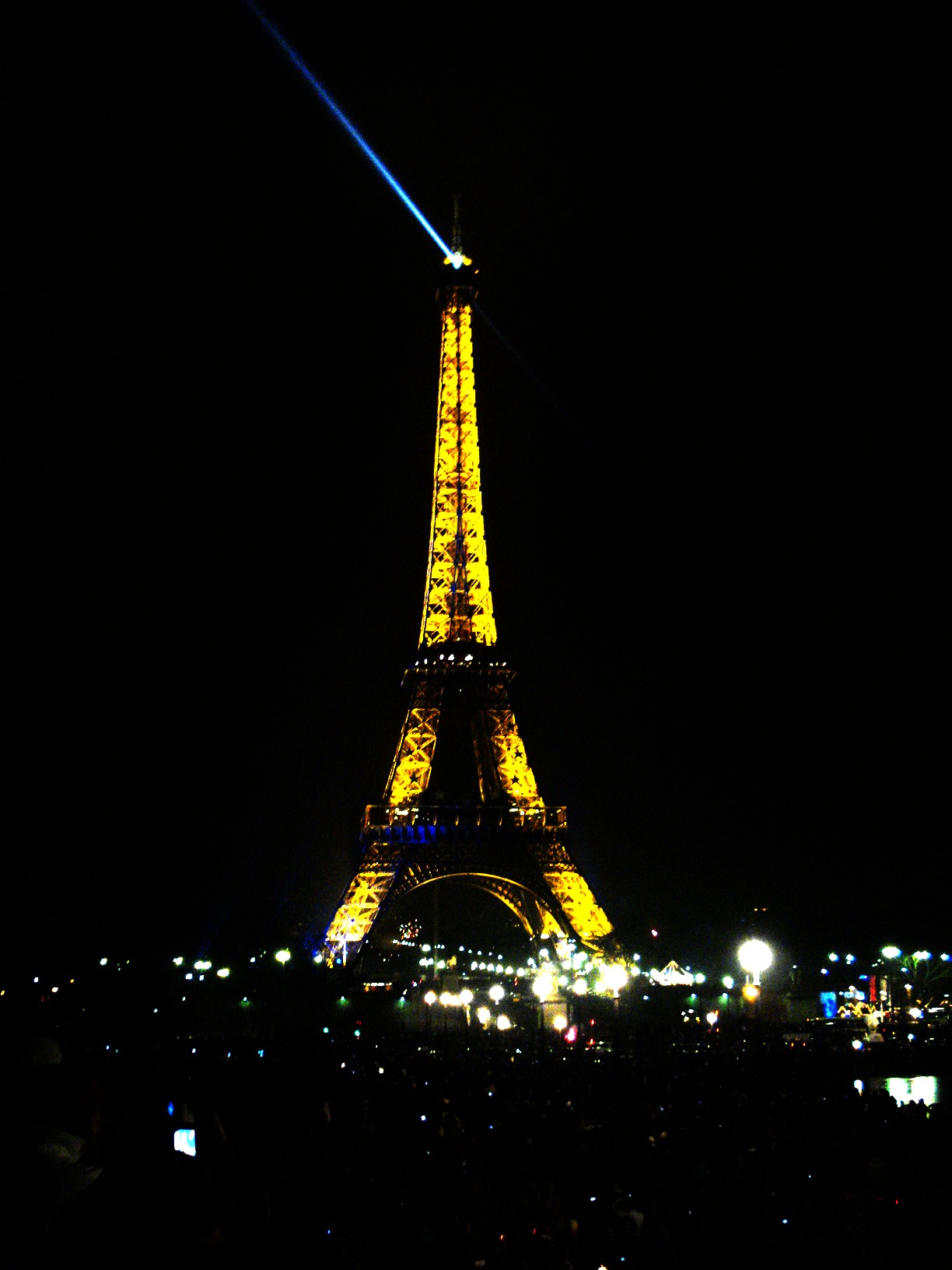 The end of the year is just around the corner, and the last day of 2014 is approaching. Soon enough we will be saying hello to a brand new year, full of hope, expectations, and travels! For some, the night of 31st of December is just like any other night, for many it is a special and exciting night, for me… my favorite night of the year!

So far, I had the opportunity to spend my favorite night of the year in four different countries across Europe, in four well known and loved European cities. I believe many of you might already have planned where you will spend your New Year’s Eve, but maybe some of you are still considering a few places. In any case, I share now with you how was like to spend New Year’s Eve in: 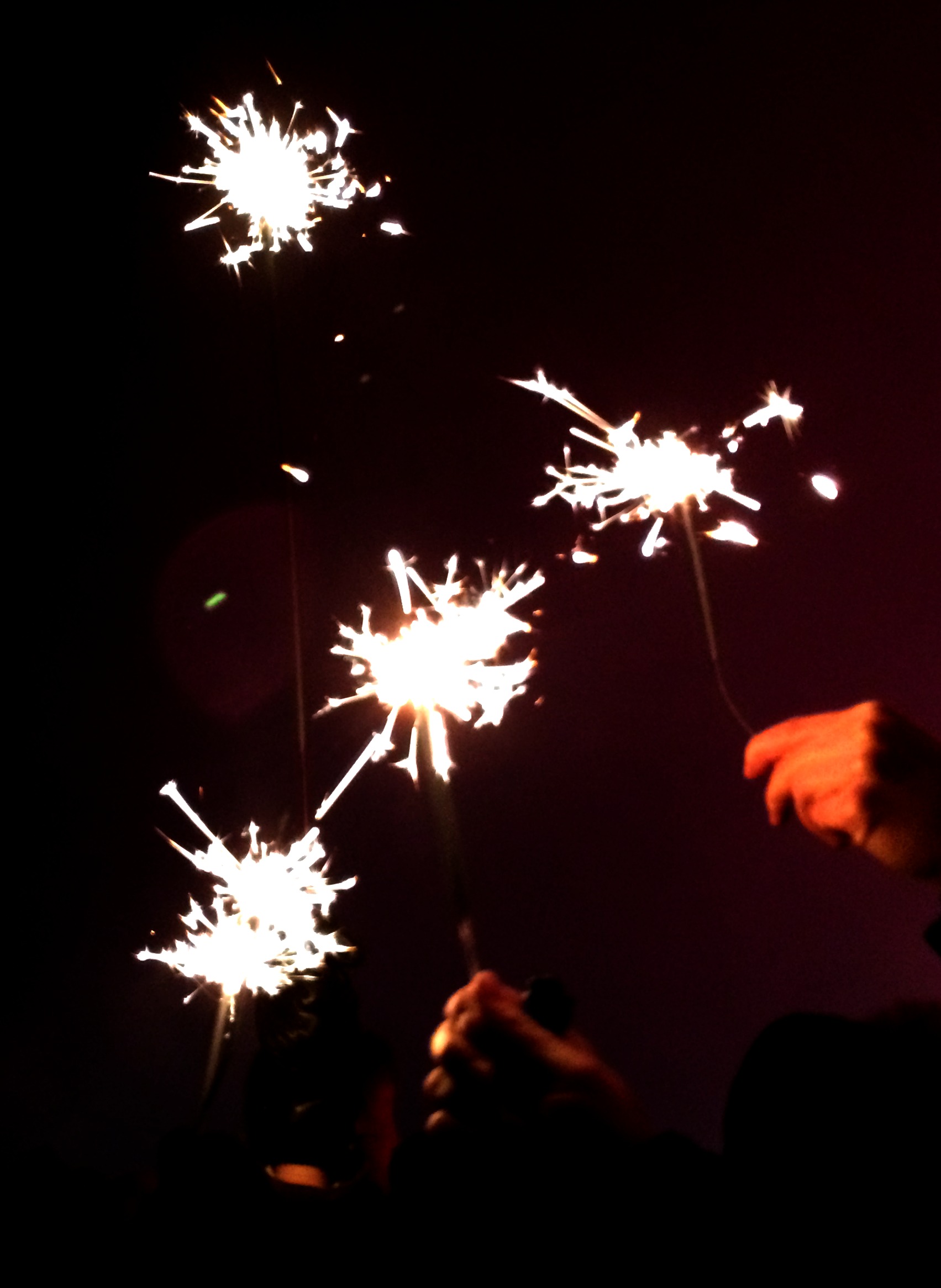 Because I live in Munich I thought that one day I had to spend New Year’s Eve here and see how is it like. So after gathering a few friends at home for dinner, when midnight was approaching we all decided to head to the Olympia Park, where there is a hill from where it is possible to see the city from above. However, on New Year’s Eve it was very cold and foggy, which means we didn’t see almost anything, so I don’t advise you to spend there.

In Munich there are other options of how to spend your New Year’s Eve. Apart from spending it at Marienplatz – where the City Hall is – along with thousands of other people, there are parties everywhere. If you decide for a party, make sure to make a reservation in advance. In terms of price, these parties can cost around 150 Euros per person, with everything included. One thing is certain: a New Year’s Eve in Munich will be cold!

With whom: W and friends

Would spend there again? No! I have to be honest.

Stockholm is one of my favorite cities in the World, and after visiting it for the first time during the fall, I decided that one day I wanted to get back there in the next opportunity I had. So when deciding where to spend New Year’s Eve outside Germany and not paying a huge amount of money because of one special night, Stockholm was somehow the best option!

W and me only decided what to do for New Year’s Eve after we got there. We were told that the most famous and popular place to go would be Skansen, an open-air museum at a park located in a hill with an amazing view to the city and the sea. And that is where we went!

Every year since 1895 New Year’s Eve is celebrated at Skansen. There is always a concert with local bands – which were a bit boring for my taste – and small tents selling hot drinks and snacks, as well as a privileged view to the city. Spending New Year’s Eve at Skansen was indeed beautiful with all the amazing fireworks coming from the nearby boats and the old town – Gamla Stan – simply incredible despite the cold!

Would spend there again? Not in Skansen, I think it is a one-time thing, but I would spend in Stockholm again and do something different. 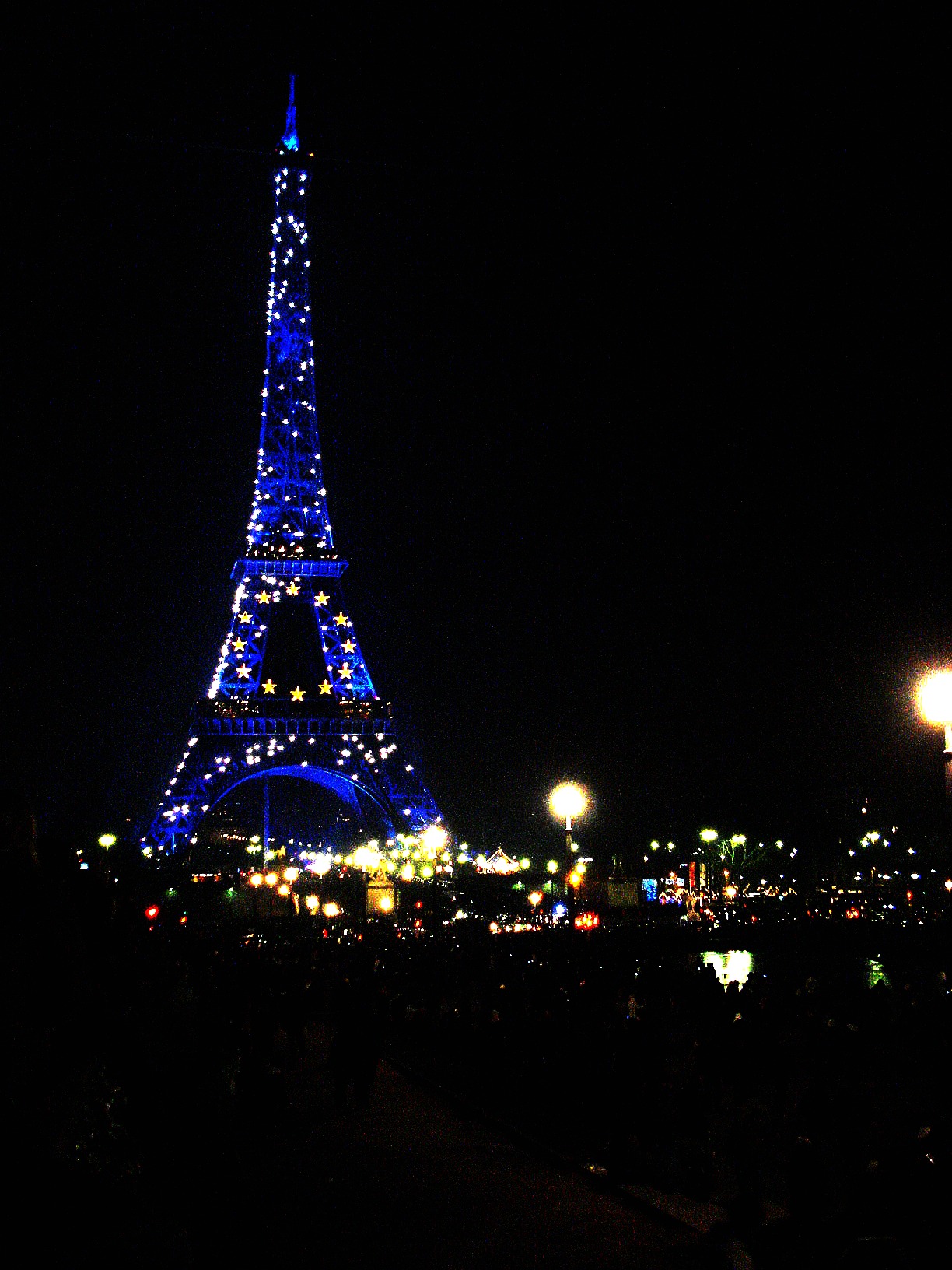 It was when I was living in Paris, and even though I knew I would spend New Year’s Eve alone in the city of lights, I had high expectations for this one. I decided to spend in the most obvious place: in front of the Eiffel Tower, at the Trocadéro. It was a bit cold and packed with people from everywhere in the World, most were in big groups or together as a couple, I was probably one of the few that were alone.

In 2008 the Eiffel Tower was in the European Union’s flag colors, all blue with gold stars. Each one of the stars would go dark in the last seconds before midnight, as a countdown, then the entire tower turned into a new color, which was very nice to see. Though, I have to say I expected more fireworks than they had, it looked beautiful anyways and I enjoyed my last day of the year alone, but surrounded by thousands of people.

Leaving wasn’t the easiest task; the nearby metro station was closed so everyone had to walk a bit until the next opened station. The way back home was fun with some Spanish guys singing some of their funny New Year’s Eve’s songs in the metro, and everyone trying to sing along! 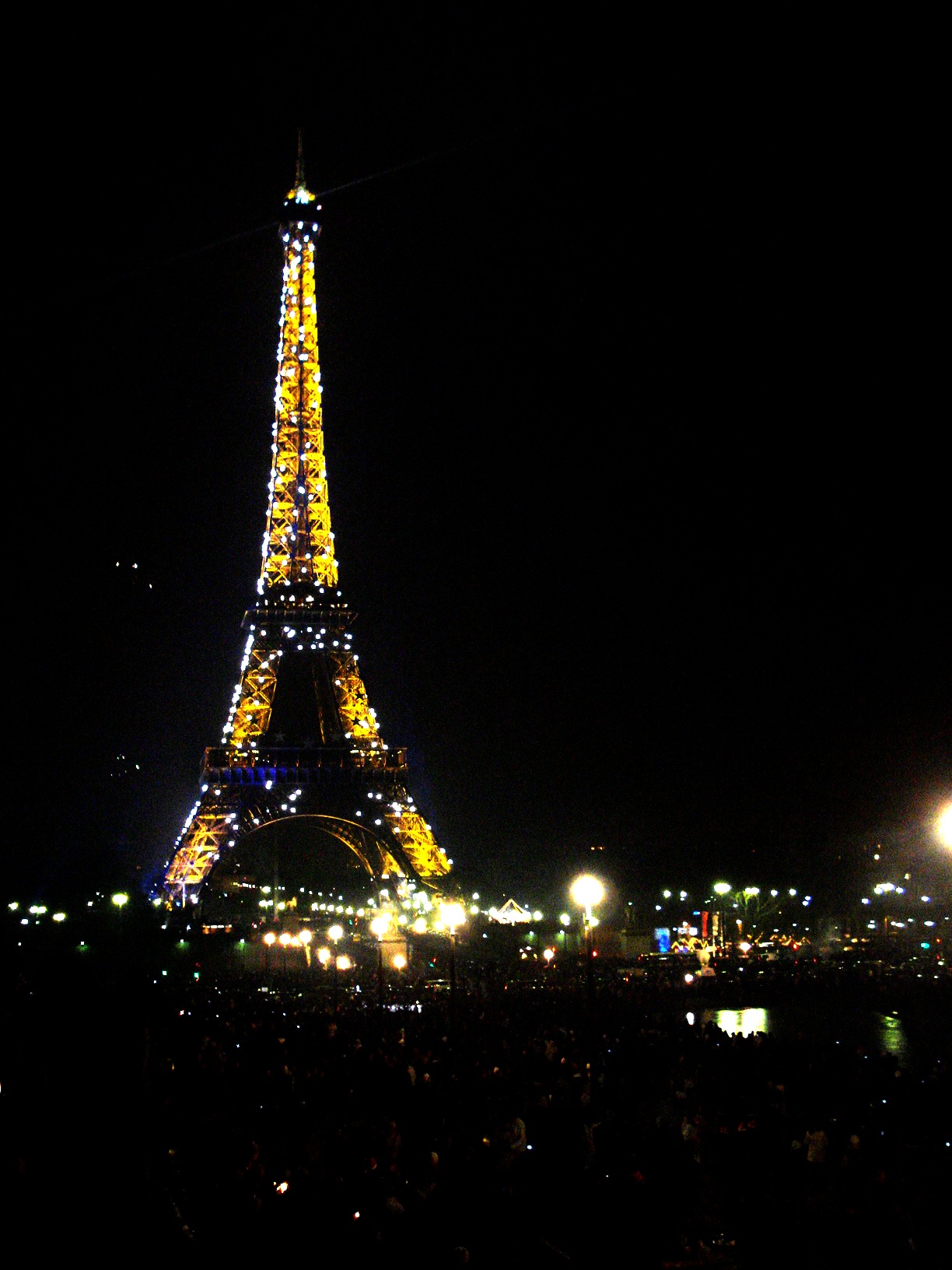 Would spend there again? I think if would spend another New Year’s Eve in Paris I would go to the Champs Elysées next time to see how it is. 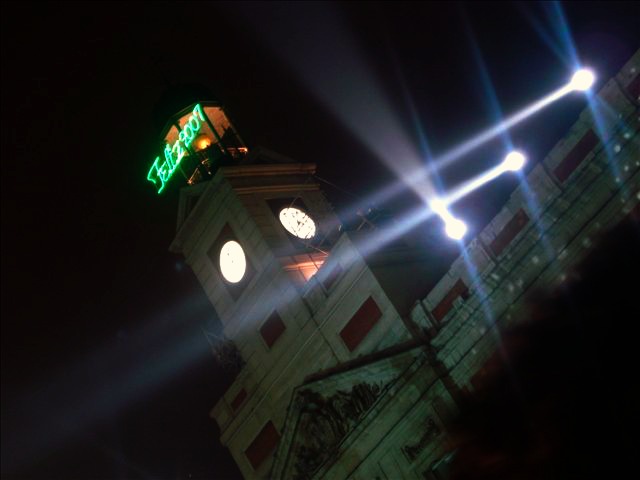 New Year’s Eve in Madrid is a night to never forget. It is incredible that even with the cold – well, not that much if compared to the rest of Europe – people are cheering and singing and partying. I spent midnight at the famous Puerta del Sol Square, where there is a countdown at the clock on the top of the Casa de Correos.

The Spanish has a tradition of eating 12 grapes at each chime of the clock; that was fun! For a moment I thought I just couldn’t eat fast enough! Even though I was very sick of my stomach, it was impossible not to enjoy the most of the Noche vieja in Madrid. The crowd gathered at the Puerta del Sol Square was simply the best, not to mention eating the grapes in a hurry plus the fireworks! After midnight people would go to clubs around the city and party all night long; this option wasn’t possible for us, as my sis was underage. Next time!

With whom: little sis and friends

Weather: I didn’t think it as cold for a winter night, but Spain isn’t so cold as most European countries.

Would spend there again? Definitely! Plus, add a little party after.

I think you might probably have figured out my favorite one among the four!

*My photos aren’t the best, but back then I was a worse photographer than I am today, so forgive me for that! 🙂 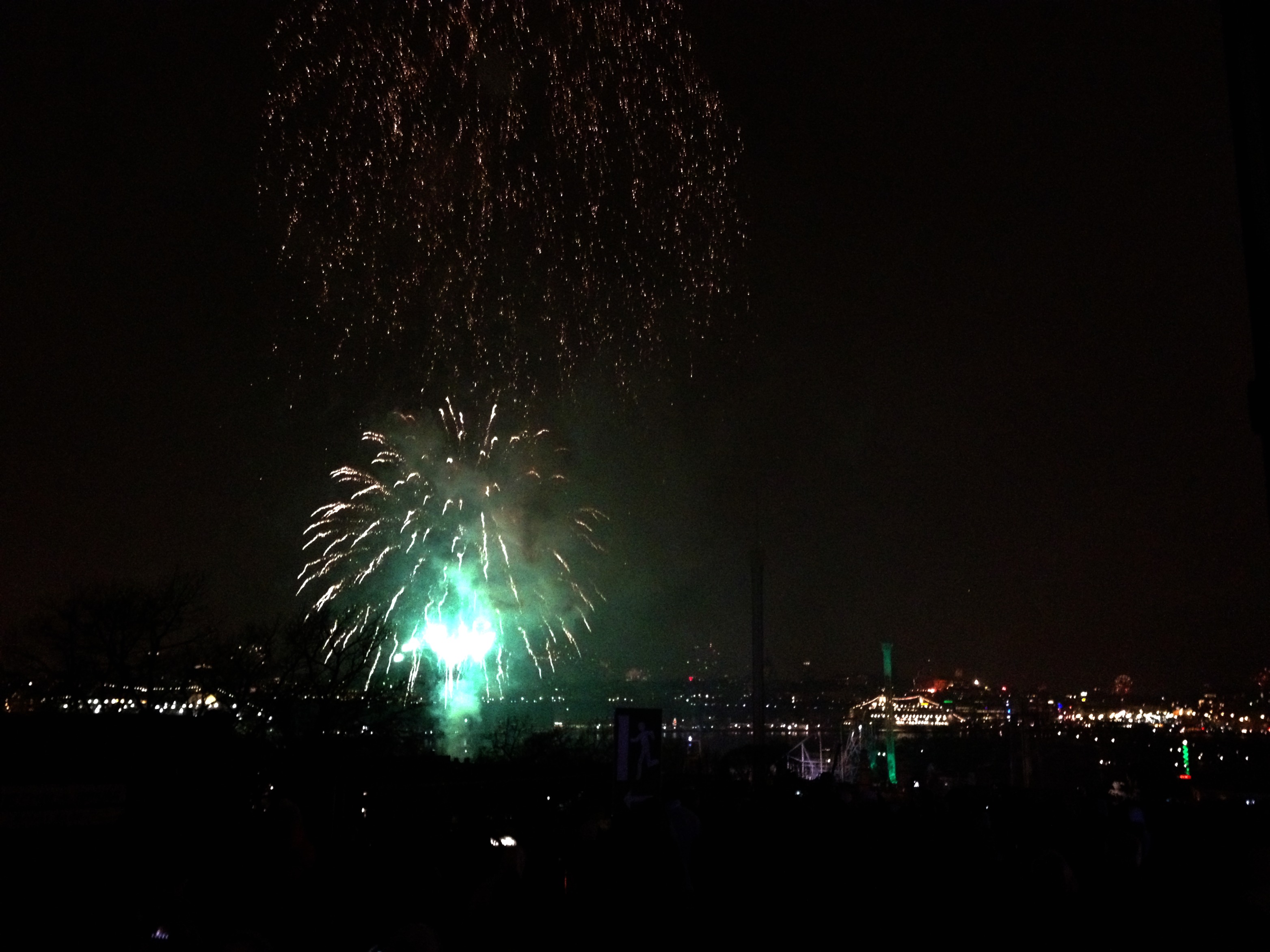