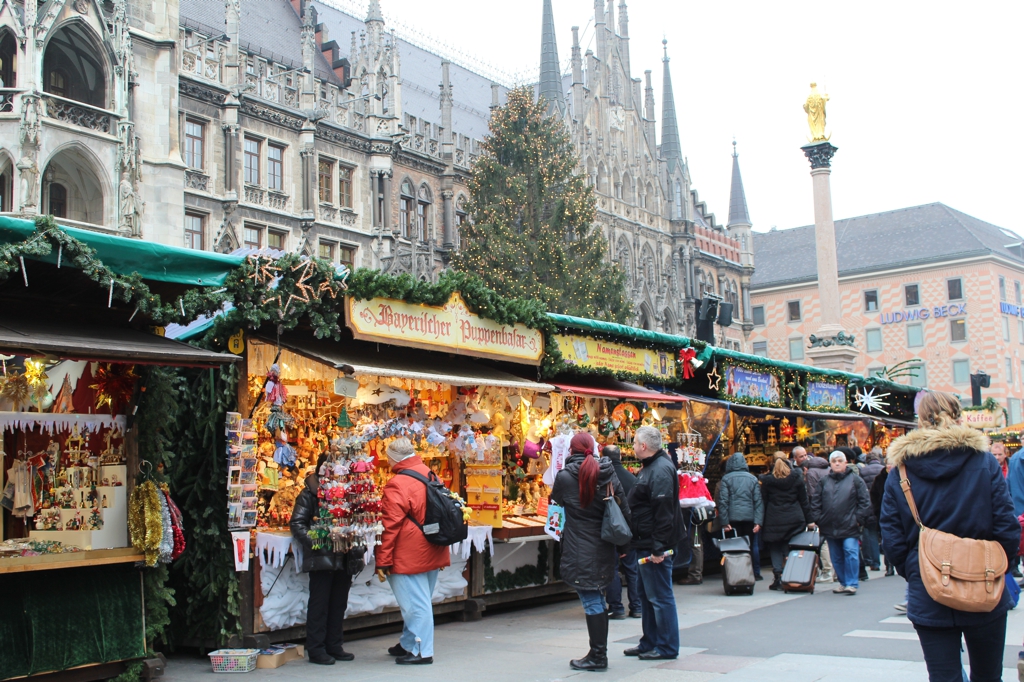 Is that time of the year once more. For those of you in the North Hemisphere it is winter, for those on the South it is summer, but for all of us who celebrate it, it is Christmas time!

As an expat in Germany for almost 3 years, it is only fair to share with you how the Germans celebrate Christmas, what are their traditions – which might be similar to many other countries – and which ones are my favorites. Being married to a person with different nationality often means different traditions, and that is exactly the case when a German marries a Brazilian.

After sharing with you some German habits in a previous post, I now share some of their Christmas traditions…

I was really excited to spend my first Christmas in Germany when W told me that the tradition is to buy a real Christmas tree! I know that for many of you it is the same, but in Brazil we buy fake trees made out of plastic. I love the idea of having a new REAL tree every year, and you can always pick the size you want… and the smell is great! 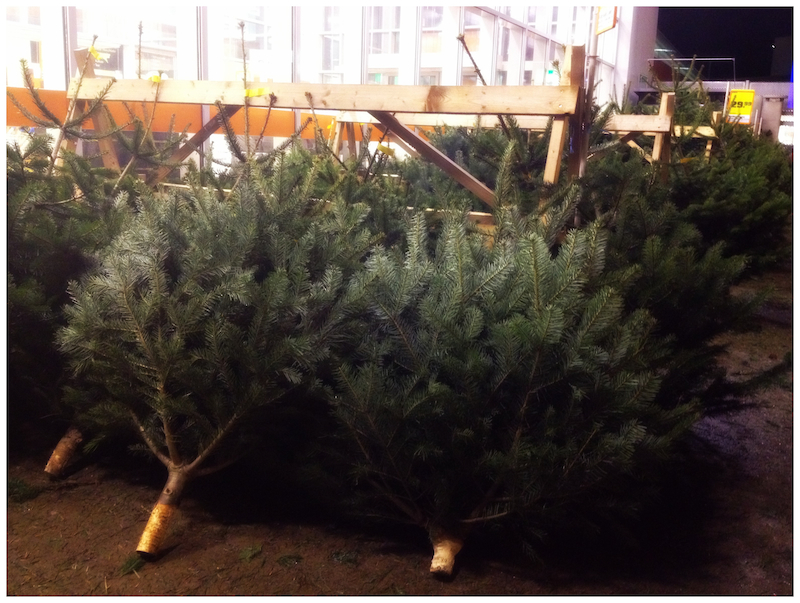 I was not so excited – in fact I was disappointed – to discover that here in Germany the tree is only decorated on the 24th! I don’t know how it is in your country, but for me this is the one tradition I can’t get used to. Why only on the 24th? In many countries, including mine, the tree is ready on December 1st. Sorry, but W had to compromise a little on this one. 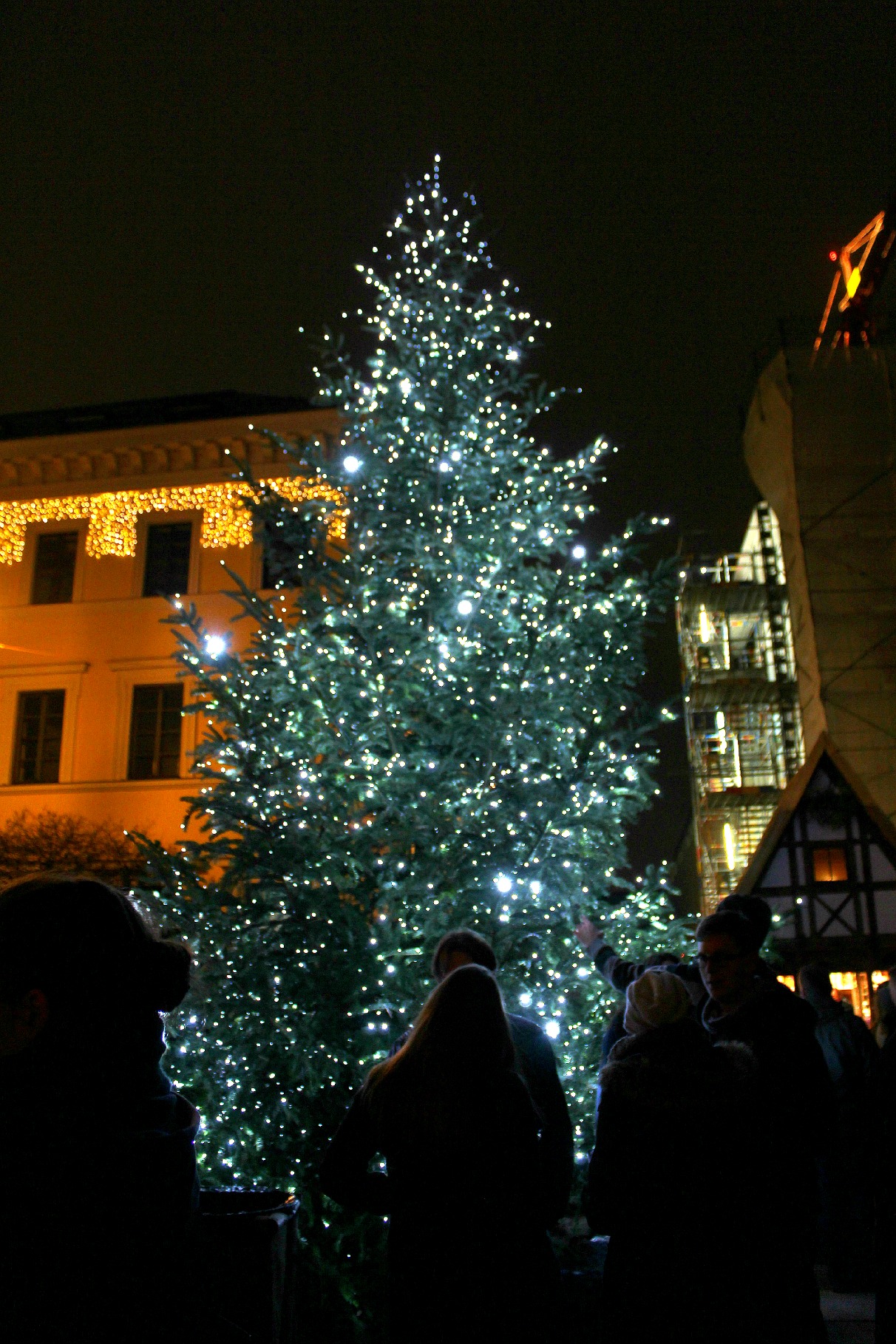 Advent, as probably most of you know, is the name given to the four precedent Sundays to Christmas. Here in Germany – as in many other countries, especially in Europe – there are calendars that begin on the 1st of December and end on the 24th. That is why it is called Adventskalender: Advent’s Calendar.

These calendars have a little window for each date, which contains a little surprise in each one; it can be chocolates, a message, or a gift. Some even have Whiskey and others beer! You can buy them in supermarkets, and in many different stores; and you can either buy one already with the surprise inside, or empty ones, which will allow you to arrange the gifts by yourself, making it even more interesting! Every year W makes one for me, he takes this tradition very serious… and I love it! 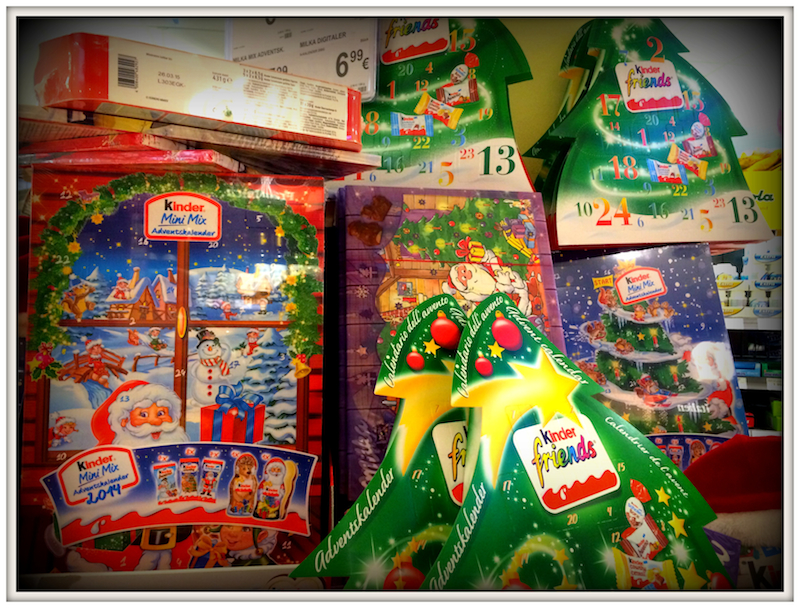 These two are the most popular drinks in Germany at this time of the year. Glühwein is the German word for mulled wine. Some hate it, others love it. I stay with the second option! It doesn’t only tastes good and helps with the cold winter, but it also comes in cute mugs. 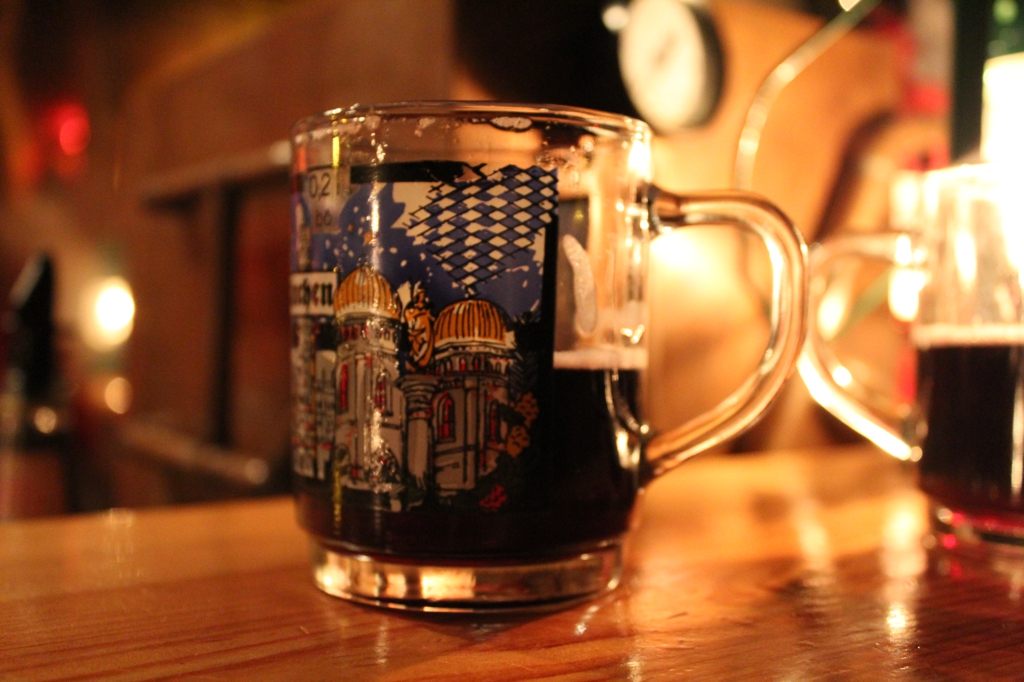 Kinderpunsch, is basically the same as Glühwein, but without alcohol and little bit more sweet. It is mainly for kids, but I know some adults that love it too!

It is something every German has at home. It is a wreath with four candles; they should all be lightened one at a time in every Sunday precedent to Christmas. It is mainly sold in supermarkets, flower shops and decoration stores. 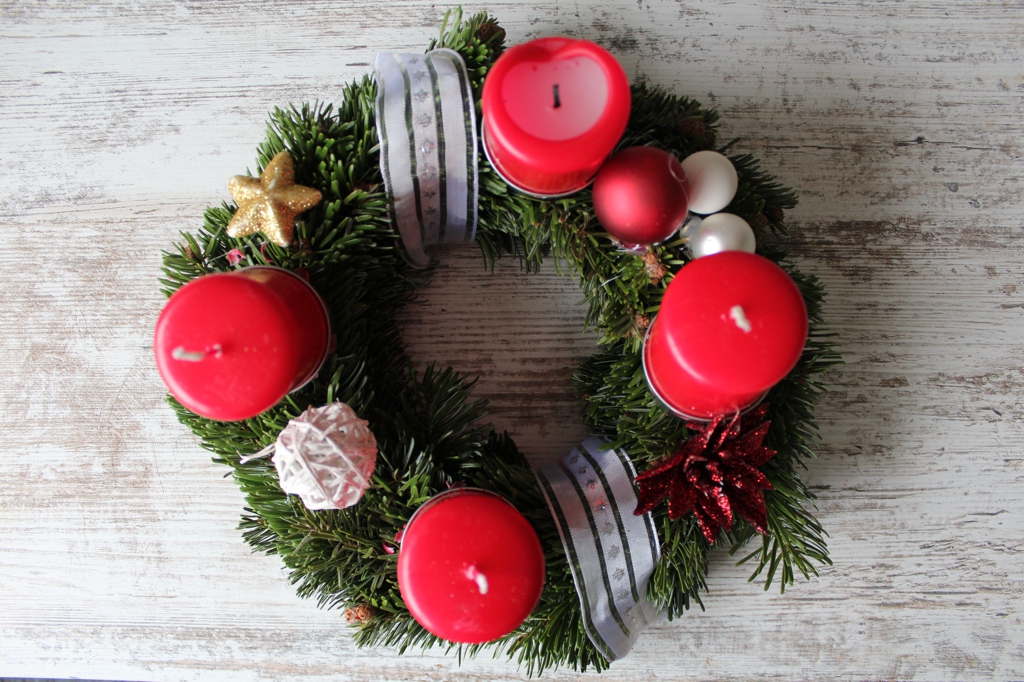 Hmmmm, that is probably the best part! Apart from the typical drinks of this time of the year, there is some typical food too. On Christmas dinner, it is tradition to eat duck, though throughout this season, these sweets are specifically a hint:

Pläztchen are small-decorated cookies with different shapes and flavors, varying from vanilla, chocolate, walnut, macadamia, cinnamon and much more. The tradition is to bake them at home, and the homemade ones are indeed the best, though you can find them in supermarkets and bakeries too, normally in small plastic packages. 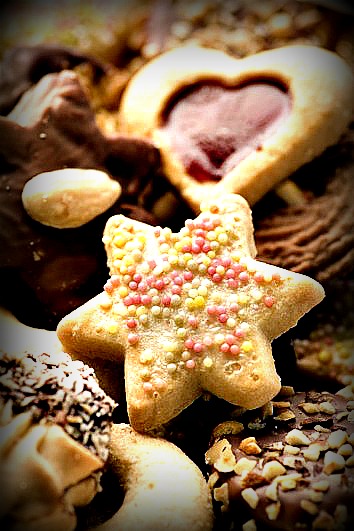 Roasted, covered with chocolate or vanilla, caramelized… these almonds are to die for, and their smell impregnates the streets together with glühwein. Not so cheap – around 4 Euros for 100g – though worth to be tasted! 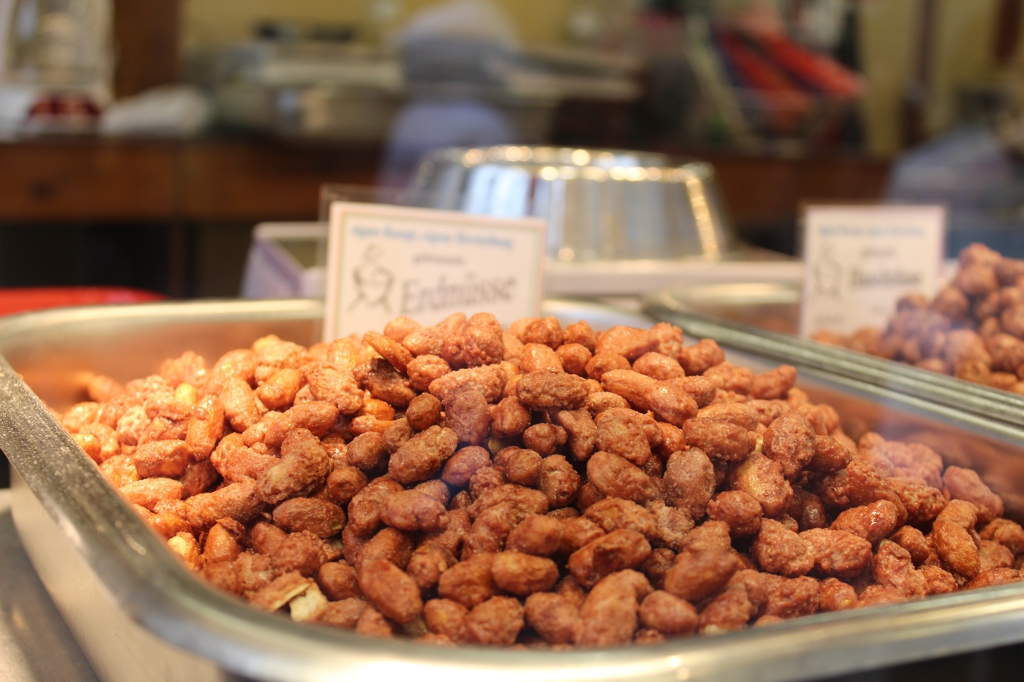 This one many of you might know, but with another name. It is originally called Kürtőskalács, a traditional Hungarian pastry, but it is also popular here in Germany, though it is called Baumstriezel. They have different flavors like sugar and cinnamon, vanilla, sprinkles and others. I have to confess that I am completely crazy about this thing! 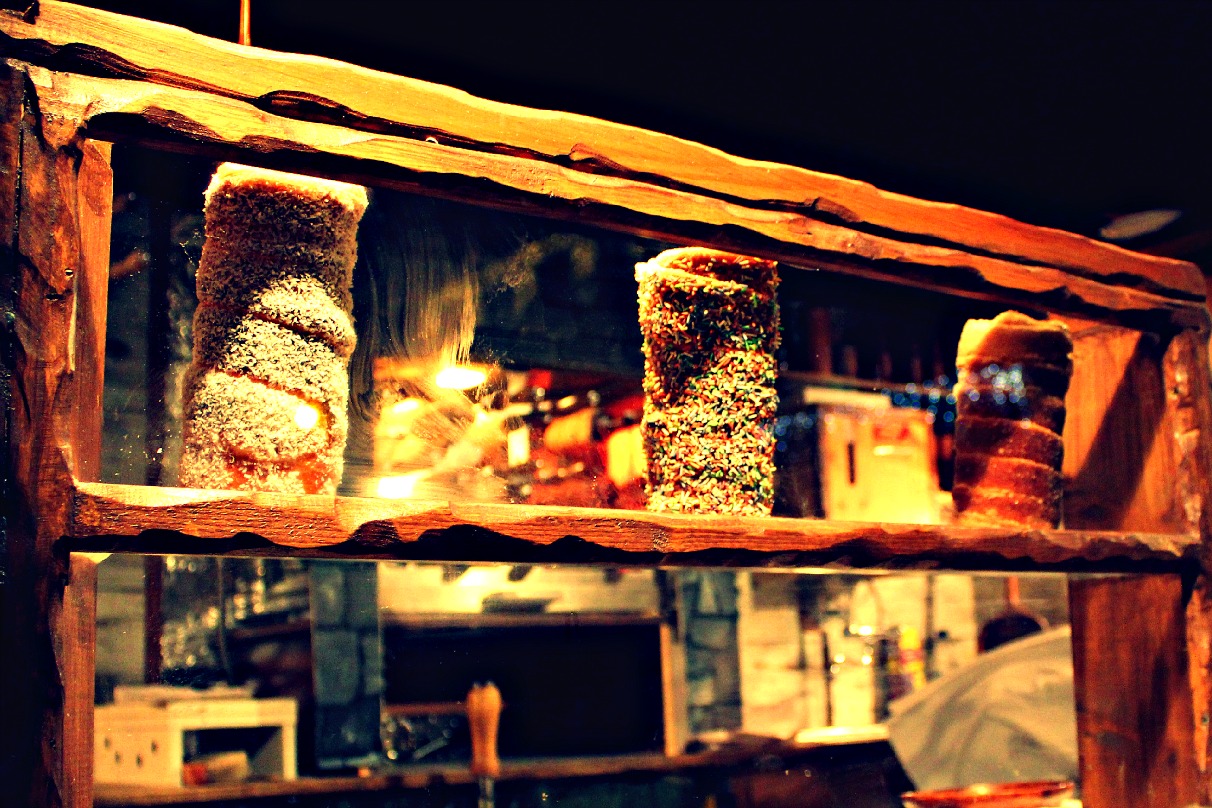 Lebkuchen is nothing less than gingerbread, which is very famous here in Germany too. You know those cute hearts traditional of the Oktoberfest? They are made of gingerbread, and at Christmas time, they are also very common, found in many different shapes and with different phrases. They are found in every bakery, Christmas market, supermarket and even in decoration stores. 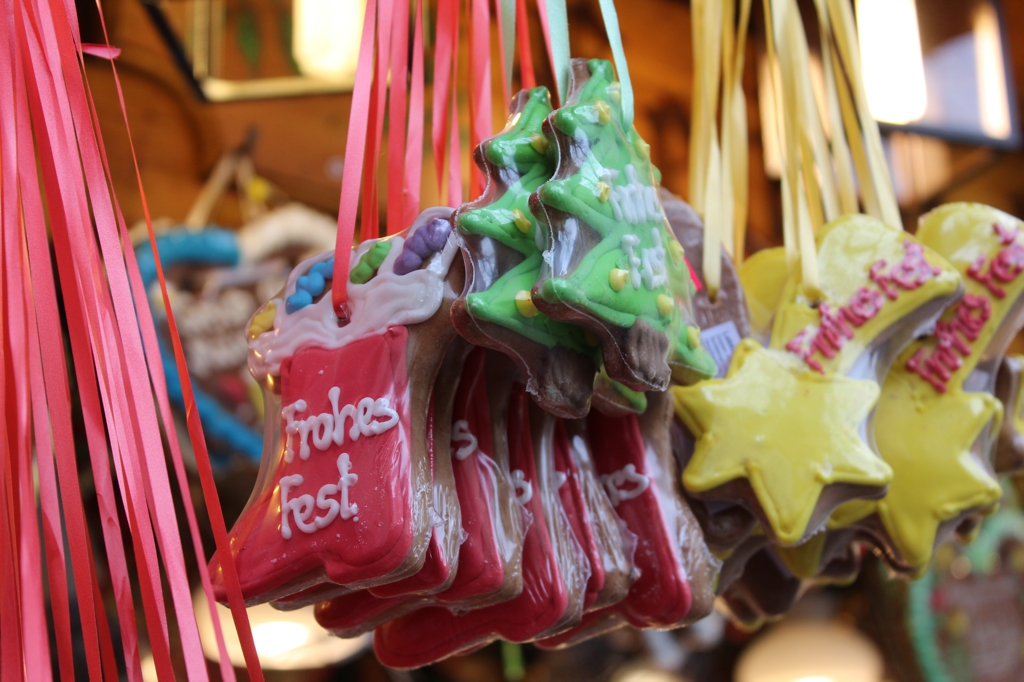 Is there Santa Claus?

Now this tradition might be of surprise to many of you, but in many regions of Germany – especially the more catholic ones – there is no Santa Claus! That is exactly what you just read. Of course they all know Santa Claus because of the media and all, but for them, there are two other important figures that replaces Santa Claus around here: St. Nikolaus (St. Nocholas) and Christkind. Every time I say “Santa Claus”, W corrects me, I surely never got used to this tradition, but of course I respect it.

For me they are all the same, but for them it is definitely not. St. Nikolaus’ day is on December 6th, it is often said that the Santa Claus we all know was inspired by him. More about his story you can find here. On the other hand, Christkind is the “gift-bringer”, the one who actually brings the gifts!

This one I believe you all know, visited or heard about. The Weihnachtsmärkte are the so famous and loved Christmas Markets, found in probably all European countries. In Germany, every town has at least one, here in Munich there are over 15 Christmas Markets, big and small ones and in different parts of the city. 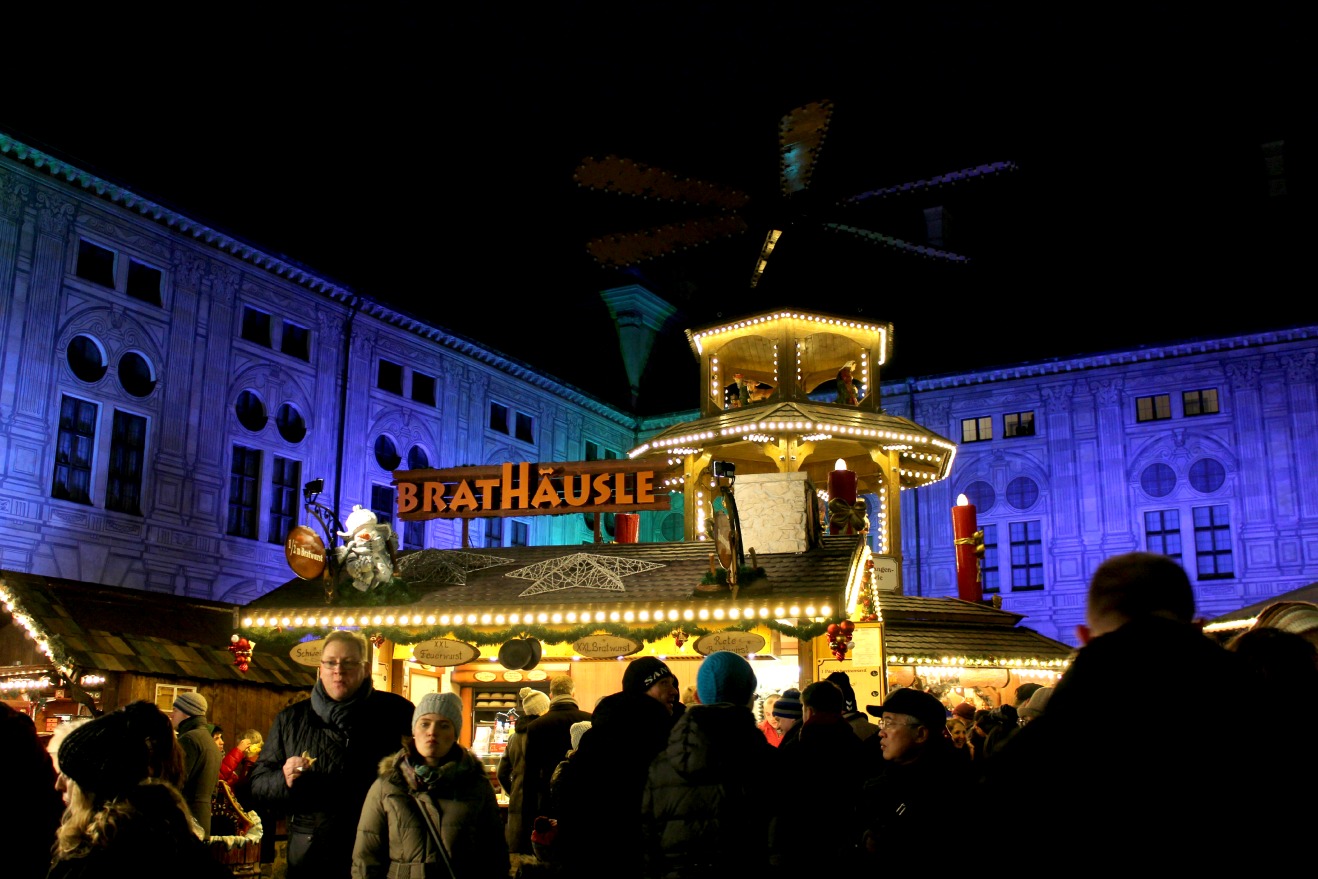 They are no doubt a beautiful and lovely tradition, but there will be much more about them in a few days when I will present you my top 10 favorite Christmas Markets in Munich! Don’t miss it! 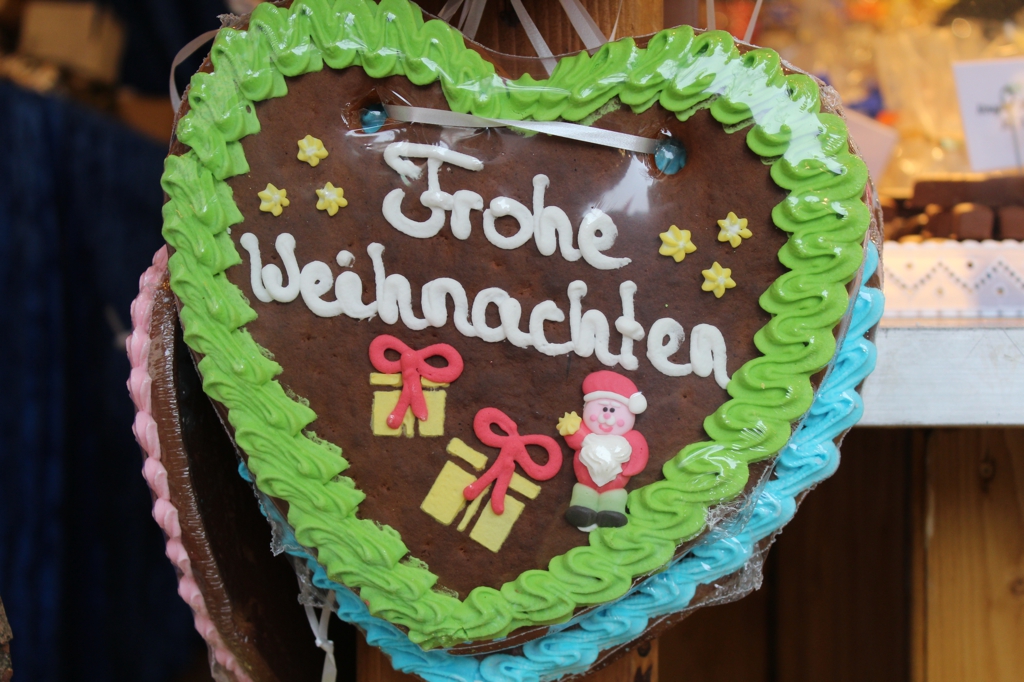 What are the Christmas traditions of your country or the country you are living in? Any similarities with the German traditions? I would love to know!