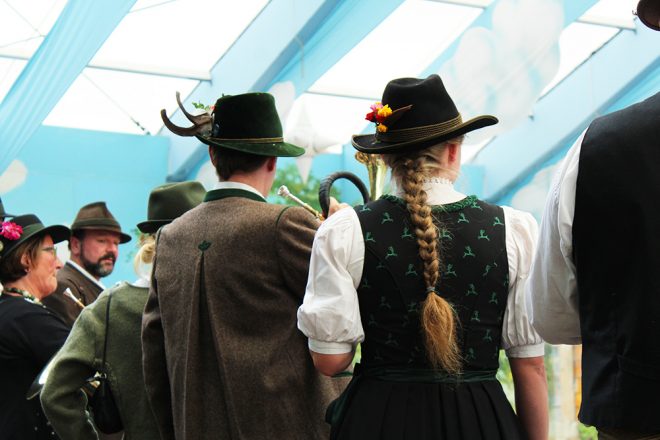 One of the things people commonly associate with Germany are those cute traditional costumes used by men and women during the Oktoberfest. What most people don’t know is that they are typical of the Bavarian region and that they are not only used during the Oktoberfest, but also during other local festivals throughout the year, as well as, traditional weddings and parties.

This so famous traditional Bavarian costume is called Tracht – a costume of a certain region, in German – the Lederhosen are for men and the Dirndl are for women. Here in Bavaria, it’s common to see people wearing Tracht throughout the year, and not only during the Oktoberfest. The costume is taken very serious, and if you ever visit the region don’t be surprised if you find people wearing them in a very normal day around the streets, or at the stadium watching a football match.

The origin of the traditional Bavarian Tracht is dated back to the 1600’s, when the Bavarian Prince Elector Maximilian I established a dress code for the people, with the purpose of dividing the society into different social classes, based on their status and profession.

Later, in the 18th century, Prince-Regent Luitpold demonstrated his affection for the traditional Bavarian Tracht and he used to wear it in several public and private occasions. This made the costume very popular among the people, especially in the Upper Bavarian Mountains region. With time, the status-symbolism of the Tracht became less important until it became common among all.

Today, the Tracht is used in the everyday life of people living in rural areas of Bavaria, and it is also used in some regions of Austria, since they were highly influenced by the Bavarians in the past.

Leder means leather and Hosen means Pants, and Lederhosen is the traditional Bavarian costume used by men, together with shirts, socks sometimes up to the knees, hats, jackets and shoes, all made especially to match. The Lederhosen can be found in different colours and length.

Interesting fact: after a while living in Germany I noticed that when the men get their hands dirty – that being from beer or food – during a festival, they clean them on their Lederhosen, and on top of that they don’t wash them… I mean, never! And you know why is that? My husband told me that the dirtier the better, it means it has a lot of history to tell! Oh well, and his Lederhosen gets to be in our closet! 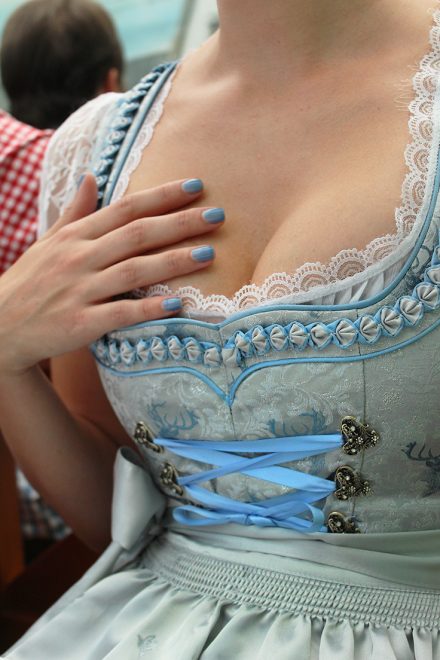 Dirndl is a Bavarian word, which means girl, and for this reason it is also the name of this famous traditional dress used by women. The Dirndl can be found in short, mid or long length, and in many different colours and textures combinations.

Every Dirndl has a ribbon around the waist, which can be tied in different ways, depending on weather you are married, single, a widow or a kid. Here are the simple rules:

To your left side: you are single
To your right side: you are married or promised to someone
To the back: for widows or waitresses
In the middle: for young girls/kids

The Dirndl is used with a specific blouse, and normally with some accessories to match, like necklaces, hats, purses, blazers, shoes, scarfs, bracelets and so on. All bought extra, on top of the Dirndl itself.

Nowadays, women also have the option of wearing Lederhosen, even though the majority prefer to wear a Dirndl – which is my case – as it is more charming and sweet, perhaps more feminine.

Yes, people here do get married wearing Tracht, and it is very beautiful, since there are Trachten made especially for weddings.

You can find Tracht for everyone, including for babies, kids and pets in any way you prefer! The costume is always a hint and everyone living here must have at least one!

Just like normal clothes, the Tracht comes from different designers, stores and of course, their prices vary from cheap to very expensive. Some people have not only one, but several of them.

The price of only one Dirndl may vary between 60 Euros and up to 3000 Euros! I know, it’s pretty expensive. If you choose to buy a cheap one, be sure that many people will also be wearing the same thing – as they are more popular – for this reason many prefer to buy exclusive ones or even costume made especially for you.

Of course if you don’t want to spend so much money in a costume that you will probably wear once a year or never again, you will surely be able to buy a Dirndl and all the accessories for between 100-500 Euros depending on how much you want to spend and the quality. Even so it’s expensive, but surely it is beautiful, and living here in Bavaria you NEED one, trust me! Otherwise, people will always ask you: why aren’t you wearing a Dirndl/Lederhosen?

Out of curiosity: a wedding Tracht can be very expensive, like normal wedding suits/dresses; but then again it always depends on you budget and on the quality you are looking for.

You can buy Tracht in the whole Bavaria throughout the year in several different stores and outlets. There are stores at the airport, online, at shopping malls, department stores, and specialised stores; during the Oktoberfest and other festivals there are also people selling hats and other accessories. Choosing where to buy yours will depend on your budget. Here are a few recommendations: