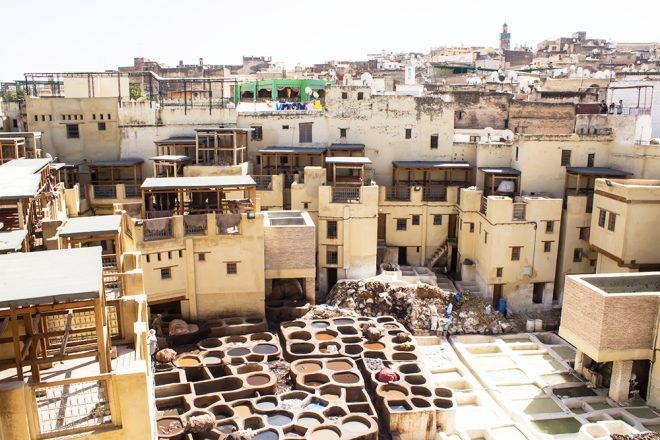 I like to see the best in people, and in places. No matter where I’m going, I’m always excited about it, and full of positive expectations. Every place has its ups and downs, pros and cons, and previous to my recent trip to Morocco, my research prepared me to encounter the beautiful and the ugly, but not enough.

Some of my encounters were already expected, others not so much. Our trip to Morocco was filled with good and bad, beautiful and ugly, fun and outrageous, relaxing and funny, but mostly stressful moments. Social media doesn’t always show you the dark side of a trip, and sometimes can’t express enough the bright side, that’s when writing becomes (to me) more important than posting beautiful pictures. Why? Words are a powerful tool to prepare you for the worst, and if used carefully, in a gentle way.

If you followed my trip to Morocco on social media, the chances I made you fall in love with the country and hop on a flight asap are high. However, you should also know that the country has its difficult side, and whilst I always prefer focusing on the good and positive side of things, once in a while the truth need to be told. After all, my intention here on the blog is to help you, in every way I can, including opening your eyes.

While I was still on the trip, one day I decided it was time to make a list. The moment I began writing my observations down, my mind was racing with confusing thoughts and feelings. A few days later I still agreed with every single observation made on that list. For each negative item, I found a positive one. So here we are, 14 things I loved and hated about Morocco:

In probably every blog post or article with tips for Morocco you will read about how people harass you to buy things, to give you directions, to take a picture with a monkey, among other reasons. Trust me, they are not lying, and not exaggerating. After a few days in the country you will start to wonder whether people understand the word NO and will begin to use LAA (no, in Arabic) just in case. Unfortunately, it also won’t work. As soon as they see the apparently clear tag on your forehead that says “tourist”, forget it.

The thing is, if they only offered it once, it’s understandable, but follow you around even though you are ignoring or saying that you are not interested, it’s just too annoying. The first days, you will be shy and gentle, after two weeks, you will be firm and rude. So if like me, you normally have problem saying no, Morocco will teach you how.

The sad thing is that you won’t even feel comfortable stopping at a store to check something that you liked, just so you can avoid the harassment. How many times I saw something interesting and wanted to take a closer look and gave up? 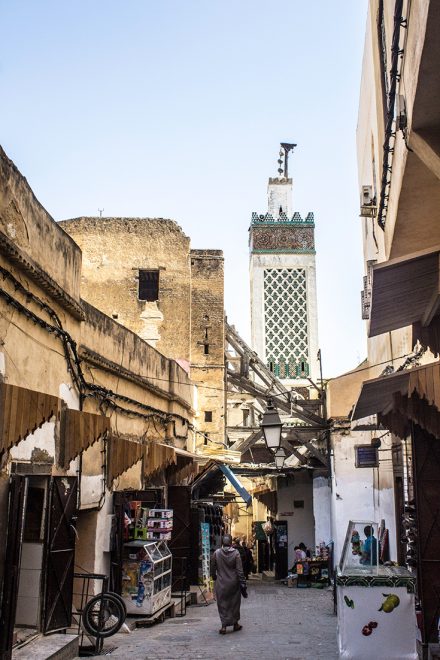 + It is an incredibly photogenic country

This is already reason enough for me to return to Morocco some day. It is absolutely incredible how the country is photogenic. Doors and windows, palaces and Islamic schools, mosques and museums, gardens and streets, mountains and lakes, ocean and waterfalls. Yes, Morocco is impressive, and you will return home with thousands of pictures to say the least.

– You need to negotiate ALL the time

Your days in Morocco will be filled with negotiations. If you love to bargain, lucky you, if you don’t, it will be a nightmare. You will need to negotiate everything all the time, with the taxi driver, with the grocery’s shop guy, in the souks, in the markets, even with the telecommunications company. It becomes tiring after a few days, and sometimes you will just want to pay whatever they ask just so you don’t need to negotiate again.

+ It is very rich in culture

I’m a very curious person when it comes to a different culture. I like to talk to the locals, ask questions and listen to their stories, traditions and how they live their lives. So far, Morocco has been the most different and culture enriching country I’ve been to. If you are interested in different cultures, you’re going to love Morocco. 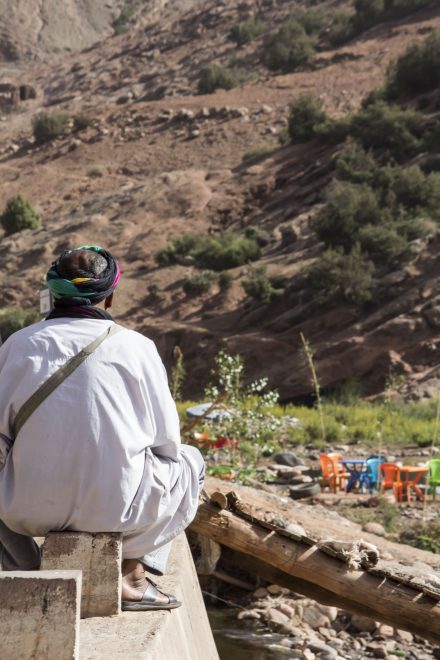 The streets of the medinas in particular, will shock you. Of all the cities we’ve been to, the medinas of Marrakesh and Chefchaouen were the ‘cleanest’. Papers, plastic, dead rats and pieces of dead animals such as chicken heads, flies everywhere, feces (both human and animal), and trash, lots of trash, I mean plastic bags filed with trash just sitting in the middle of the streets. Yes, it is smelly and disgusting, some riads and hotels even have a special shower and sink tap to keep away the bad smell in the bathrooms.

On the road you will see trash everywhere, even in the desert and near beautiful waterfalls, to my disappointment. Can you blame it on the lack of education of the locals because Morocco is a poor country? Probably yes, but it’s hard to understand that the same locals that rely on tourism so much, are so careless with the environment. It’s simply sad.

Don’t even let me go into the hygiene topic, because then you will know why people always say you should be careful with what you eat in Morocco. Do you want to know these details? Probably not, but honesty it’s all I’m giving on this post.

+ The old architecture is stunning

The medinas, or old towns, are paradise for architecture admirers. They are in every corner, old city gates, doors and windows, colorful steps, mosques and palaces, and a beautiful variety of tiles. It’s inspiring! 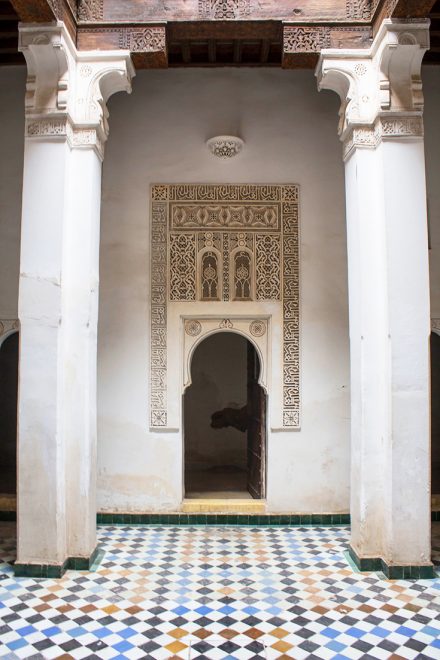 – People are always trying to extort you

After harassment, this is the most annoying thing about being a tourist in Morocco. Doesn’t matter how, people always want to take advantage when it comes to money. A taxi driver will say that at night that route you want to take costs more, even though you paid half during the day; he will also charge you more if you say you are staying in a famous hotel.

A carpet seller will say the carpet you want to buy is vintage and thus, it costs 900dhm, but in the end sells it for 250dhm. You are walking on the street toward an attraction you want to visit, when someone approaches and give you directions (sometimes wrong directions) only to ask for money afterwards. Yup, it’s pretty annoying isn’t it?

It is breathtaking and jaw dropping. From north to south, in a few kilometers it’s incredible how the landscape changes. Morocco has it all, the second highest mountain in North Africa, the Atlas Mountains, the ocean, beautiful waterfalls, lakes and beaches, forests, canyons, abundance of palm and olive trees, caves, and of course, desert. It is an unbelievably beautiful country; your eyes won’t even believe in what they will see. 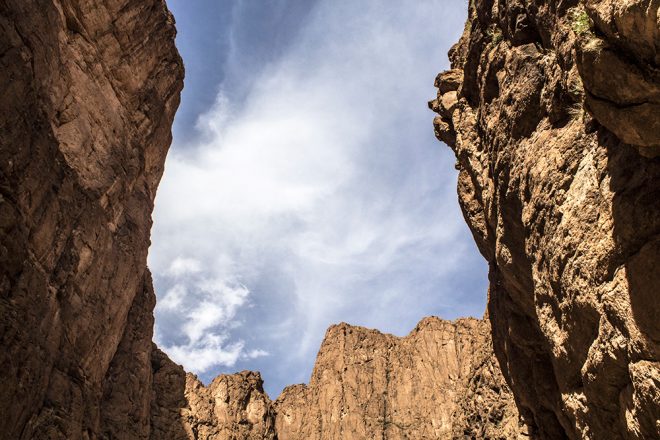 – People let you assume things rather than explain them

It might be the language barrier, which was definitely not our case as I speak French (official language in Morocco, though not everyone speaks it perfectly), but people just don’t explain to you how things work. What do I mean by that? I’m referring to the bus company, when the guy who sold me the tickets and told me that I had to pay 5dhm for the luggage, didn’t explain to whom I should pay, only to be rude to me later when I was already in the bus (I assumed I had to pay the driver, who wouldn’t accept the money).

I’m also referring to the guy from the telecommunications store who sold us 4GB Internet for our phones, and didn’t mention that it would expire in 1 week (we were going to need it for 2 weeks); also the people from the train station, who let us stay in an non existent line staring at us, until we realized they were closed (there wasn’t even a sign) and we were supposed to go to another selling point. And I can keep going…

If there is something I loved in Morocco, that is this tradition of drinking mint tea all the time. At breakfast, lunch, dinner or on a break, mint tea is there, just like if it was coffee. It’s beautiful to see how it is served, not to mention how healthy and sweetly delicious it is. Oh, and the couscous? No one can make a better couscous than a Moroccan! 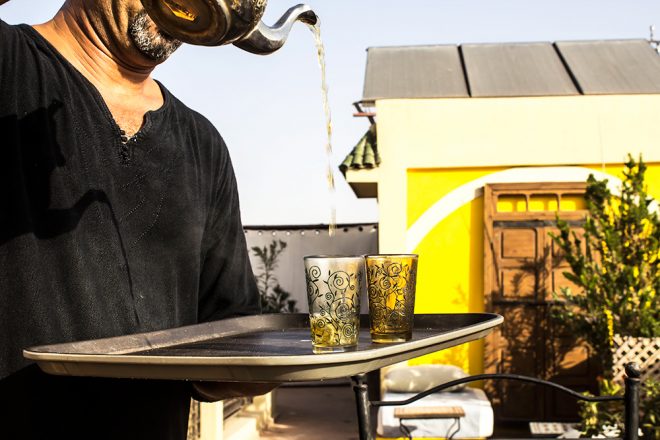 – How people stare at tourists

For many Moroccans, tourists seem to be something from another planet. It’s understandable, we can look, dress and act very differently, so it’s normal that they stare. Unless, the way they stare is threatening and beyond uncomfortable. The best example I can give of a situation is the day W. and I went to the most famous café in Tangier.

When we arrived, the vast majority of the people there were locals, the place was packed and as soon as we took the first steps to find a table, everyone stopped to stare and follow us with their gazes. There were easily over 40 people in this place. It didn’t take 5 minutes for us to leave. In my entire life, I never felt so unwelcome in a place to the point I felt afraid and had to leave. It was a first, and not my favorite moment of the trip.

Who knew Morocco produces wine, right? Well, they do produce wine and it’s divine! Their specialty is Gris (grey), which is a mix of white and red, to be served cold. It is one of the best wines I had, and I regret not having enough space in our luggage to bring some bottles back home, since here in Europe they cost over 15 Euros a bottle! 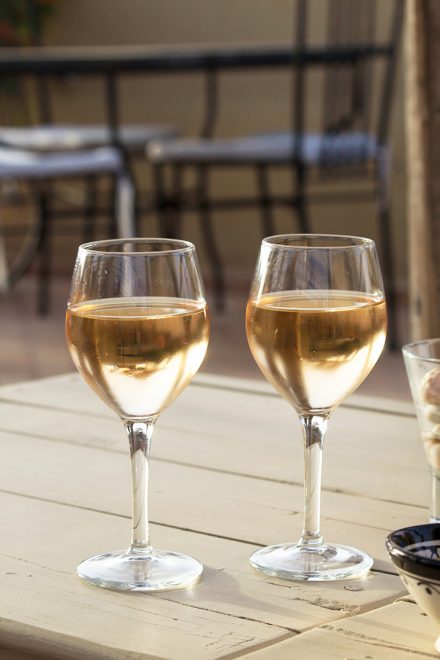 – The way men look at women

Coming from Brazil this shouldn’t have bothered me as much as it did, but the way Moroccans do it, it’s nothing like Brazilians. It doesn’t matter if you are wearing a burka, they will stare. It also doesn’t matter if you are with male company, they will stare, and the problem lies on the aggressive way they stare, and for how long they do it. They just don’t care if it makes you feel uncomfortable, the more the better. They feel good about it, and that’s the worst.

+ Despite everything, there are some amazing and honest people in Morocco

Did we have bad experiences? Definitely. Were people dishonest and disrespectful to us? Yes. But, we’ve also met amazing and honest people. Some helped us without asking money in return, some gave us a gift or offered us tea, we had honest and helpful taxi drivers, and people that simply smiled at us while walking on the streets.

Excuse the honesty, but real life is beyond a beautiful picture. Our trip to Morocco was a learning journey, it was beautiful, and also ugly. Was it worth it? A lot. Would we return? Definitely. Do we recommend it? Yes, to the open minded travelers. 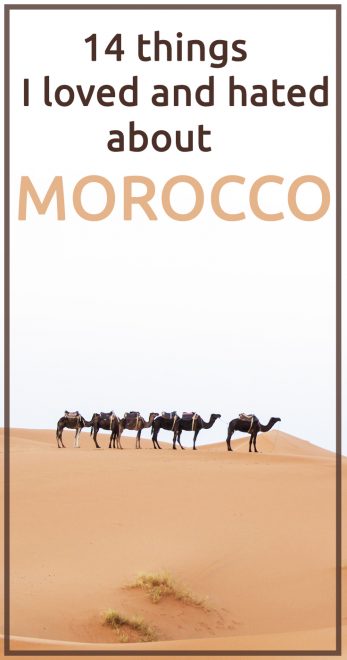